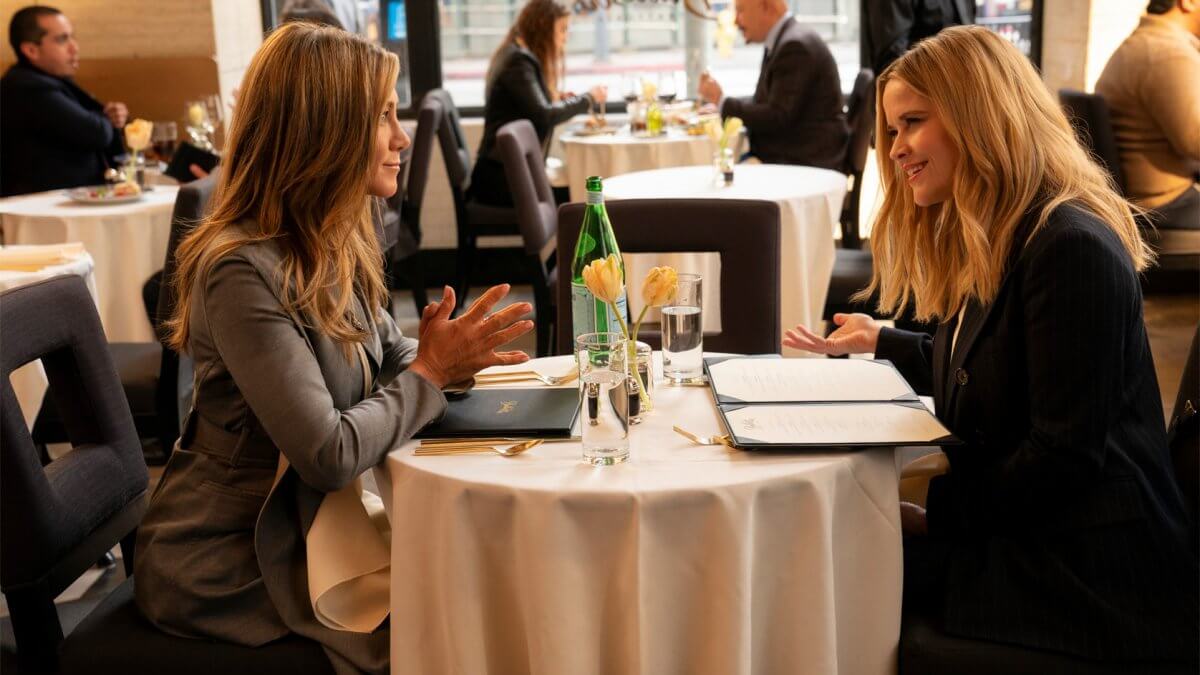 Eighteen months into the coronavirus pandemic, it’s surreal that it’s both very recent history and still ongoing–we’re still very much in it. The Morning Show resumed filming during the pandemic, and it’s woven into the arc of the second season, first as a thing looming in the background, creeping up on the storylines, and then slamming wholly into them. From the jump, we’re aware of that ticking clock.

As the season begins, nine months after the first season finale, with the events of Alex (Jennifer Aniston) and Bradley’s (Reese Witherspoon) on-air declaration still reverberating, there’s another ticking clock. Alex has stepped down, isolating herself far away from the din of New York, Bradley is co-anchoring with someone new, and Mitch (Steve Carell) has sequestered himself in Italy.

Cory (Bill Crudup) has ascended to network CEO, with new arrival, and new network president, Stella Bak (Greta Lee), who came in through a UBA network acquisition, Mia (Karen Pittman) is producing the show, and Chip (Mark Duplass) has settled into a nice, happy non-dramatic life producing a local news show. When changes start brewing that Cory desperately wants to stop, he makes a Hail Mary move that blows up the fragile peace everyone’s achieved.

Back to that second ticking clock–Maggie Brenner (Marcia Gay Harden) has a tell-all book looming, and Alex is increasingly worried about how it will impact her when the truth of her relationship with Mitch is revealed. It’s not an understatement to say that she comes unglued, going to such extreme lengths that she contorts herself into actual knots about it.

That also creates intriguing new opportunities for Bradley, who’s hesitant to capitalize on the situation, but also recognizes the very unique position she’s in. And she’s savvy enough to do what’s best for her while not abandoning her former partner. She also has her own drama when her personal life experiences a couple of unexpected resets.

Mitch, meanwhile, is humanized a bit when Paola (Valeria Golino), a documentarian living in his small town in Italy, intervenes while a woman attempts to shit stir him in public. They become friends, and he starts to process the weight of the things he’s responsible for.

The rest of the UBA ensemble face their own issues–Yanko (Nestor Carbonell) ends up in a PR debacle for an on-air gaffe and Daniel (Desean Terry) is still angling for recognition. It’s a strong second season, again shepherded by Bates Motel‘s Kerry Ehrin and much of the same creative team, that remixes the cast pairings in interesting ways. This set of ten episodes also puts some real-life perspective on the politics and soapiness of the behind the scenes of the news business vs. the actually unfolding life or death situation that’s on the horizon.

The impeccable cast, starting with Aniston and Witherspoon and all the way down the chain, deliver some extraordinary, emotionally raw scenes as they recognize their past misdeeds and try to atone, some more successfully than others. Strangely enough, given the timing during which the episodes unfold, that forced introspection and clearing out of lingering emotional baggage is an excellent way to start a pandemic lockdown.

Photos and video courtesy of Apple TV Plus.

Doctor Who Preview: “The Rings of Akhaten” [VIDEO]