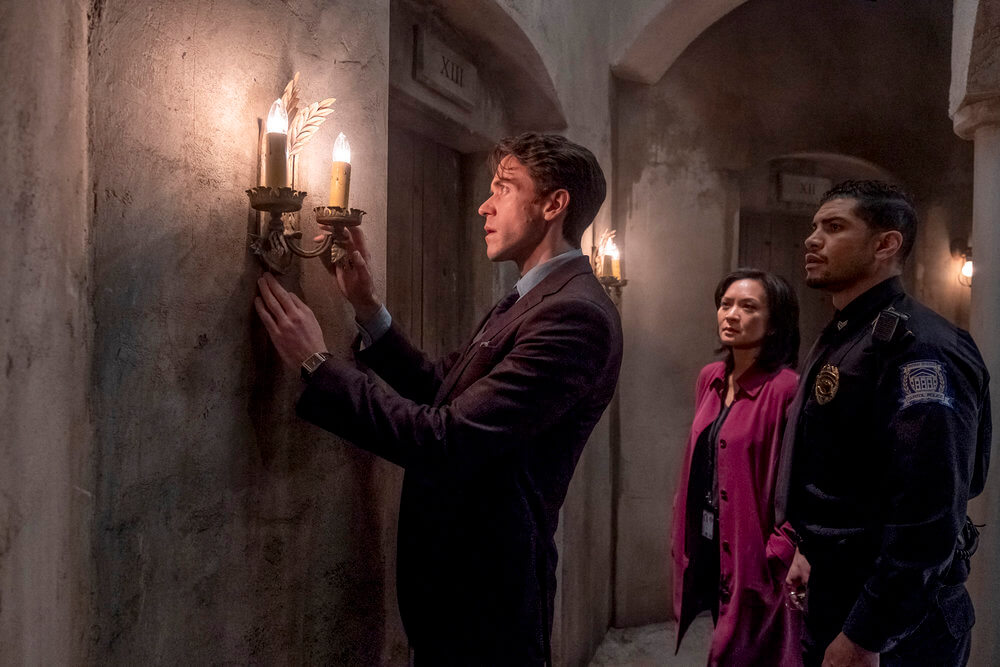 In the theatrical world, Tom Hanks, director Ron Howard, and screenwriters David Koepp and Akiva Goldsman teamed up for three film adaptations centered on Dan Brown’s Robert Langdon, a Harvard symbologist and modern-day Indiana Jones, who’s in it for the history, not the treasure. The DaVinci Code, Angels & Demons, and Inferno were released in 2006, 2009, and 2016. This past Christmas, I finally watched all of them, out of order, on one weekend, and then immediately wondered why they stopped at three because I loved the darker take on National Treasure‘s smartypants puzzle-solving set against old-world European religion and history.

Then I found out the void was soon to be filled as Peacock had greenlit a series based on the character. That series, Dan Brown’s The Lost Symbol, based on the titular bestseller, is set in the present with a younger Langdon, now played by Ashley Zukerman.

The first season, which drops its first episode this Thursday on Peacock, finds Langdon pulled into a mystery when his mentor, Peter Solomon (Eddie Izzard), seemingly summons him to Washington, DC. Once Langdon arrives, he discovers it’s been a ruse and Peter has actually been kidnapped.

Soon, Langdon is pulled into a maze of puzzles set by Mal’akh (Beau Knapp) that weave very old history, Peter’s secrets, and and present-day mysteries in a race to save Peter’s life. He’s joined by Peter’s daughter, Katherine (Valorie Curry), with whom he has his own history, CIA agent Inoue Sato (Sumalee Montano), Capitol guard and military veteran, Nunez (Rick Gonzalez), and Peter’s colleague, Warren Bellamy (Debris‘s Tyron Benskin).

The series filmed in Toronto, so look for a fun who’s who of HITG, including Greg Bryk as Sato’s boss who has his own agenda. Dan Dworkin and Jay Beattie lead the writing room and are executive producers for the series, alongside executive producer Dan Trachtenberg, who also directs the pilot.

It’s fun to see someone new adapt a character that Hanks deftly made his own, and Zukerman puts his own spin on some of Langdon’s mannerisms and behaviors, such as his extreme claustrophobia. It’s nice to have the action set up with characters with whom Langdon has a history. We understand that he’s not just invested in the long-ago past mysteries that could determines Peter’s fate, but also the recent past of the people in his life whom he holds very dear.

Dan Brown’s The Lost Symbol streams the first episode of its ten-episode season this Thursday on Peacock, with new episodes to follow each Thursday. Here are a couple of sneak peeks.

Photos and Videos Courtesy of Peacock.

The Strain Preview: “Creatures of the Night” [VIDEO and PHOTOS]