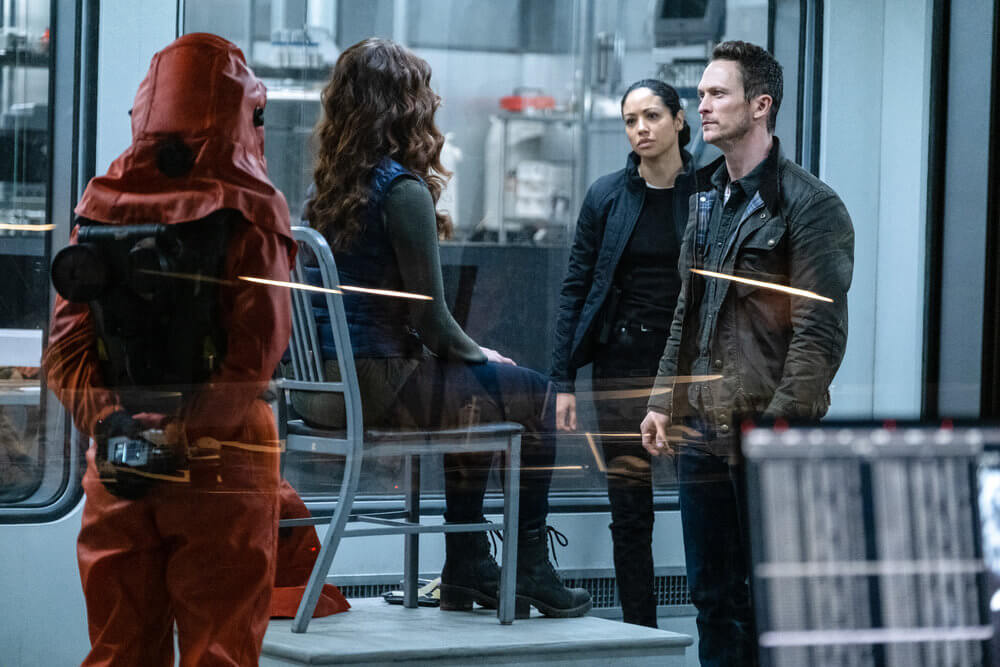 We’ve known from the jump of Debris that Bryan came out the other side of some mystery dark thing, and this week, in “Asalah,” it comes rushing back to him as a full-on psychological body slam courtesy of a debris-affected high school teacher named Mariel (Erin Karpluk).

When she’s discovered near-catatonic in the woods and only asking for Bryan over and over, he’s summoned. After he and Finola arrive, Mariel’s narrative turns to random snippets of playback from Bryan’s service in Afghanistan. While Finola’s confused, he’s immediately ashen with recognition and horror.

It gets worse when Mariel jolts Bryan into a hyper-violent REM state while she continues to recite chapter and verse of those events as he’s forced to relive them in a strange mix of past and present memories. It’s a really cool stream of consciousness performance from Karpluk, who mimics the conversations as they occurred while being completely detached from them.

While he’s navigating that mine field of a mind meld, Finola’s desperately trying to separate him from Muriel’s hold as the field team searches for the debris. And then she’s left with an interesting theory about what the debris did when it cloned Bryan and had control of her (not to mention that time warp watusi from the last two episodes). But she still doesn’t know anything about the injections Bryan’s been sporadically receiving and whether they factor.

It’s a raw episode that gives us a glimpse of who Bryan was before Maddox rehabbed him. Questionable hair choices aside, he was still the same inherently sweet guy but just so burnt by repeat tours in Afghanistan. When he befriends a young Afghan woman, the titular Asalah (Zarina Sterling), we know from how carries himself now and her picture that is always with him, that it will not end well. And we grieve it right along with him.

Finola also realizes that despite his humor and swagger, Bryan’s borne as much grief as she has, and she’s hell-bent to pull him out of re-experiencing it and save his life. When she sees that Maddox is genuinely worried he could lose him, she gets the other POV on their bond, which we learn started during Afghanistan. Just two episodes left after this! Renew it, shall we, please and thank you.

Debris Preview: "I Am Icarus"