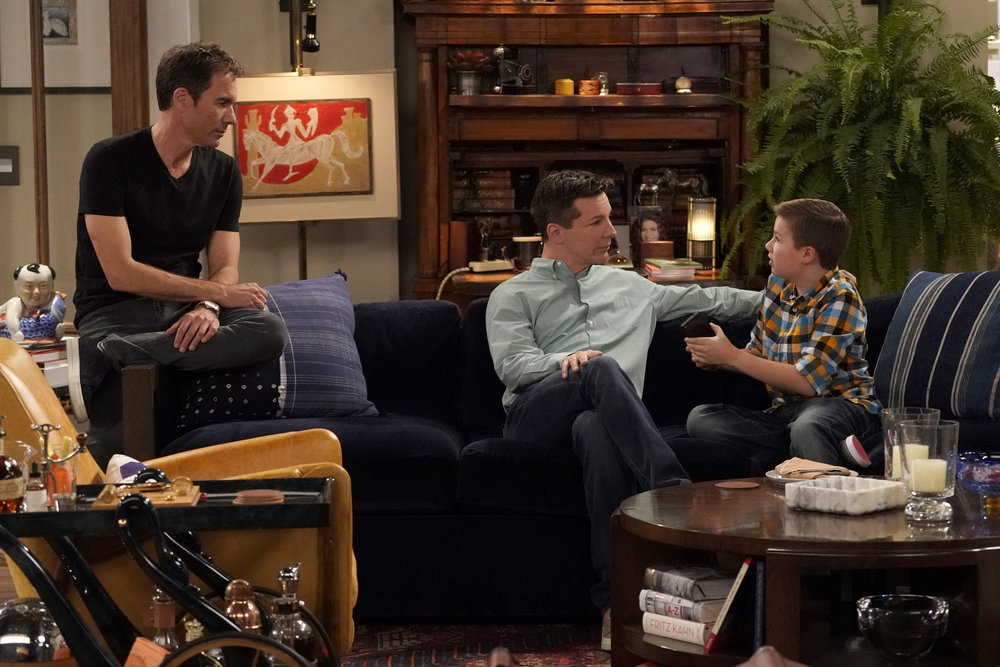 Five episodes into its return (too soon!), Will & Grace is on a roll, and tonight’s episode gives the “where are they now” treatment to Jack’s biological son, Elliot (Michael Angarano), who arrives with the news that he has a son of his own, Skip (Jet Jurgensmeyer).

What could be a one-note setup about Jack’s horror that he’s old enough to be a grandpa instead turns into a really poignant arc when Skip needs an assist and Jack and Will step up in a very big way.

At Grace Adler Deigns, Grace tries to stop Karen’s overtures toward Tony (Anthony Ramos) and then has to tamp down her own impulses, too.

In an SNL-worthy turnaround, there’s a biting observation about the government’s handling of Puerto Rico, which tells you have fast they are getting these shot and on the air. Look for Jane Lynch and Andrew Rannells as the worst camp counselors ever–a massive wink, nudge to fans who know them–in a series of scenes that rage against conservative views on LGBTQ.

I’m so pleased with this season and that they’re honoring the original fans with character callbacks. To be hitting so many great notes so many years later is a pretty big deal. They say you can’t bottle chemistry, but NBC is coming pretty damn close, which they know because they’ preemptively ordered another season before we ever saw this one.

Will & Grace airs at 9 pm/8c Thursdays on NBC. Here are a few sneak peeks of “Grandpa Jack.”

Lucifer Is Not Amused by Canada's Cutest Couple "Mr. and Mrs. Mazikeen Smith"