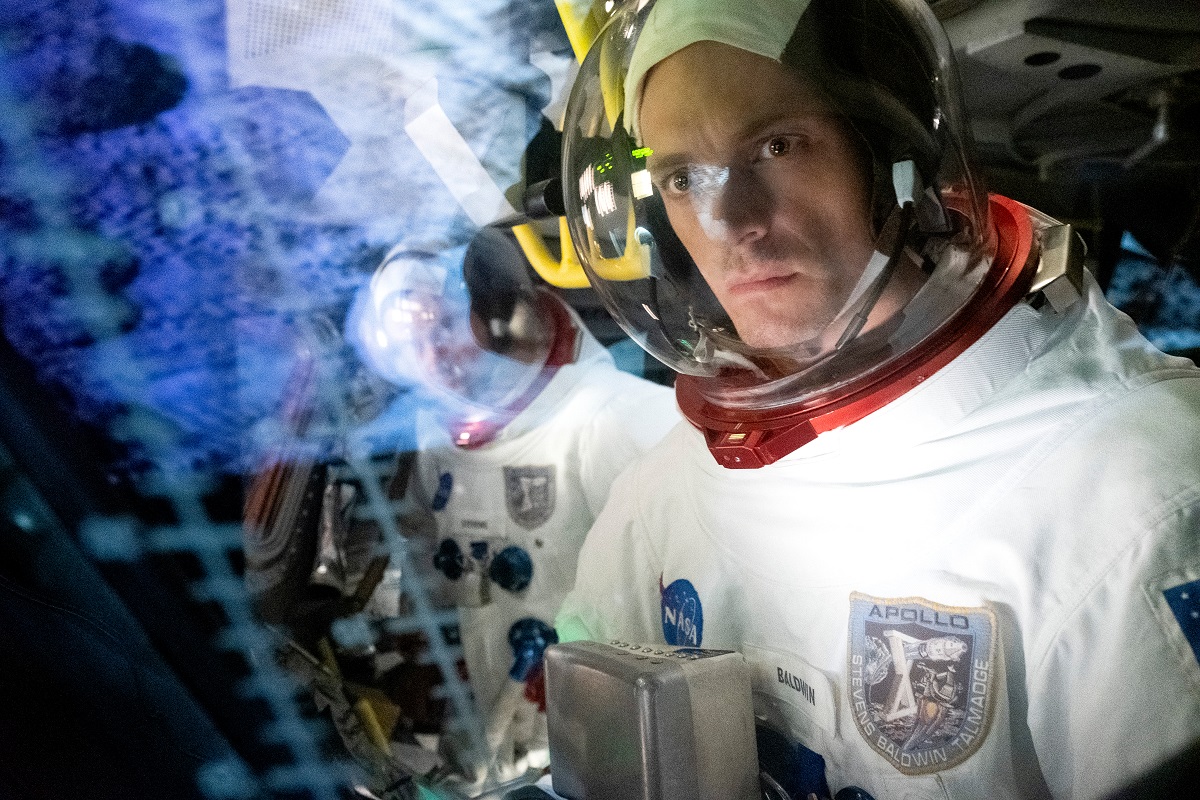 Next up in our week-long preview of Apple TV +, which launches this Friday, is the NASA-themed drama, For All Mankind. The brainchild of BSG‘s Ronald D. Moore , the hourlong series set in 1969 follows the fallout at NASA in an alternate history scenario where the Russians made it to the moon first.

A mix of fiction interwoven with archival footage and real-life astronauts and members of the nascent space program, the series looks at the lives of the men and women in the space program, blending the story of their lives on the clock and actual missions and their family lives when they go home.

If y’all have read us a while (thank you!), you know about me and Joel Kinnaman, so he’s 100% the hook for me here. He plays the fictitious amalgam character Ed Baldwin. His wife, Karen, is played by Shantel VanSanten, who I also adore. Thirdly, since I’m a Houston gal, the NASA angle is also intriguing. Win. Win. Win.

I’m really glad to tell you that even if none of those three pieces of the puzzle are your thing, it’s an excellent ensemble and surprisingly timely, launching on the eve of the first women-only spacewalk from the International Space Station.

Set just as the Russians make the moon and in the days and weeks afterward when NASA’s trying to catch up, the action spins off an accidental venting to a reporter in a bar and the blowback that resonates all the way to DC, imperiling the program on an even larger scale.

Aside from the fictitious Baldwins, we also have the Stevens, Gordo (Michael Dorman) and Tracy (Sarah Jones). Initially portrayed as a stay-at-home Mom, Tracy gets drafted into one of Nixon’s PR ploys, which creates personal and professional dissension but also a revolutionary opportunity.

Other fictitious characters include Margo Madison (Wrenn Schmidt), who lives and breathes her job behind the scenes at Mission Control, and immigrant father and daughter, Octavio (Arturo Del Puerto) and Aleida (Olivia Trujillo), who head north from Mexico after her mother dies.

The result is an entertaining and compelling drama whether you have any inkling about the NASA program or not. And if you do, I’d imagine it’s an intriguing test of your knowledge and the “what if” scenarios if things had in reality gone very differently.

For All Mankind premieres Friday on Apple TV+, with its first three episodes, with subsequent episodes to follow every Friday. Apple TV+ will be available in over 100 countries through the Apple TV app on iPhone, iPad, Apple TV, iPod touch, Mac and other platforms, including online (tv.apple.com), for $4.99 per month with a seven-day free trial.

The series has also already been renewed for a second season. Here’s a sneak peek. While you’re on a NASA high, look for 12 new Snoopy in Space short films, which will also be available Friday.

Photos and Video Courtesy of Apple.