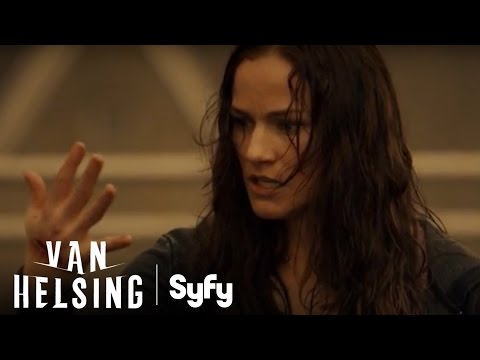 At the end of July, we got an early taste of Van Helsing when Syfy sneaked a commercial-free preview of the pilot episode, “Help Me.” This Friday, the true premiereÂ kicks off with aÂ  rerun ofÂ that episodeÂ at 10/9c, followed immediately by the second episode, “Seen You.” Even if you watched the premiere two months ago, I’d highly recommend watching both episodes together this week because they are a really good pair, the “after” followed by the “before.”

If you’re altogether new to the premise, the story is set a few years from now in a Seattle that’s been ravaged by a vampire uprising. A single soldier, Axel (Jonathan Scarfe),Â guards a comatose woman he calls “Sleeping Beauty” (Kelly Overton) and later learn is VanessaÂ in an abandoned hospital, while keeping his doctor friend-turned-vampire (Rukiya Bernard) alive until there’s potentially a cure.

That’s been their day-in, day-out for a while, and everything changes with the return of the soldier’s colleagues and the arrival of a group of civilian newcomers who have managed to survive on the run and now need safe harbor. Over the course of the first hour, the script flips again when they’re invadedÂ by vampiresÂ andÂ Vanessa wakes up.

In the second hour, we dial it back to 2016, before the world devolved, when Vanessa was a struggling single mom, Axel was a line soldier following orders, and Doc inherited a very unusual not-quite homicide that garnered the unwelcome attention of the military. It’s an episode that very quickly buildsÂ the backstoryÂ of who these characters were, who was important to them, and what they were left with when Seattle essentially imploded around them. We also meet a few of the vampire contingent, played by Paul Johansson, Laura Mennell,Â  and Aleks Paunovic.

The back-to-back airing works well, because we start from a place where they’re already fully in survival mode and everything’s gone to hell. WhileÂ we can assume how much these characters lost, the second episode shows us, and cements the speed with which that happened, leaving them to make the best of what they were left with.

The episodes also balance out the mix of quiet and fury that will define the series. I like it a lot. And although I am an admitted weenie about the gore, it’s not so over the top that I can’t abide it. I appreciate that the show doesn’t go all in on that, so far.

After this week’s double-shot premiere, Van Helsing will air Fridays at 10/9c on Syfy. Here are a few teasers, and the full SDCC panel. Check back Friday night after the premiere for the first of my series of exclusive interviews with executive producer and co-showrunner Simon Barry. Click here for my exclusive interview with Kelly Overton and overall teaser on the series.

How to Get Away with Murder Preview: “It’s All Her Fault” [VIDEO and PHOTOS]