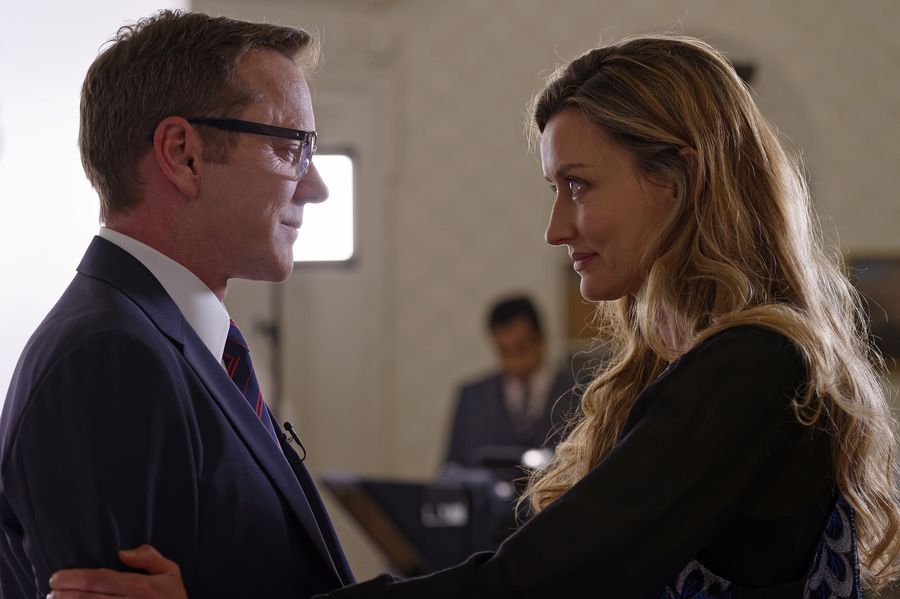 If you’ve seen the trailer, there’s almost nothing to actually set up about what Designated Survivor is, but when you dive deeper, it’s a very enticing socio-political family drama that’s a little subversive from the jump because (Canadian) Jack Bauer is the POTUS and Nikita is a Feeb. That alone made me giggle.

I was immediately intrigued when he went on record to say that he felt like we was potentially holding the next decade of his life in his hands when he read the pilot. In the current TV era, that’s a huge statement. Also, because I was that kid who actually wondered, and probably asked a horrified adult, what would happen if something like this ever transpired. I had never heard there was a plan for that.

SutherlandÂ supported here not only by Maggie Q, but also Californication‘s Natascha McElhone, Chasing Life‘s Italia Ricci, Kal Penn (who took time off from acting a few years ago to actually work in The White House), Blood & Oil‘s Adan Canto, and The Last Ship‘s LaMonica Garrett. Rookie Blue‘s Noam Jenkins is only in the pilot, but it’s nice to see him. Ditto for Malik Yoba.

In case you’ve missed the trailers, the gist is pretty straightforward: Every time there’s a State of The Union, which is generally attended by everybody who’s anybody in Washington, there’s one Cabinet member appointed to sit it out just in case something terrible happens that wipes out the top several layers of government. Well, this time, it does, and that token member, who’s on the rails of his losing his appointment, is the last man standing when a terrorist act decimates the Capitol.

Sutherland plays Tom Kirkland,Â the mild-mannered education secretary who uprooted his family–lawyer wife Alex (McElhone), sullen teen son Leo (Tanner Buchanan from The Fosters), and precocious daughter, Penny (McKenna Grace, who you might recognize as young Caroline from TVD)–to DCÂ withÂ his position on the Cabinet.

The morning of the State of the Union,Â the Chief of Staff (12 Monkeys‘ Peter Outerbridge) tells Tom that change is afoot regarding his position, and he barely has time to let that registerÂ before his entire world turns on a dime asÂ a fun date night with his wife goes terribly wrong and they’re whisked to the White House while the Secret Service tracks down their kids.

What follows in the first hour is a mix of super-fast and super-slow developments.Â The family tries to figure out what exactly has happened and what that means for each of them, Tom’s right hand, EmilyÂ (Ricci), tries toÂ reach her boss, the White House survivors try to outmaneuver the POTUS they’ve inherited, a Presidential speechwriter (Penn) deals with the glare of a sudden promotion, and the FBI starts to piece togetherÂ a massive, soul-shaking crime scene.

Throw in that the new POTUS has to reassure the American people and convince the U.S. military to stand down on retaliating against a phantom adversary and you have a full pilot.

There areÂ some quiet gem moments asÂ the new normal just happensÂ when the KirklandsÂ realize this is their world now–Secret Service details, losing the familiarity of your first name, and finding an assertiveÂ voice when that’s the last thing you’re known for. Sutherland and McElhone are very good together as a solid couple who are seemingly in the best possible place you could be for something like this, as a unified front and as each other’s calm in the storm.

It looks like a great role for Maggie Q, too. When weÂ meet her, she’sÂ nerding out aboutÂ a date that’s not going well at all. Then she’s all business when the call comes, and then just as quickly rattled to her core when she sees the Capitol for the first time.

I really liked the first hour, and I’m interested in seeing where they go and with what speed. I believe they’re only on deck for 13 episodes, which I’d think would dictate a fairly brisk moving forward.

Scandal Preview: What You Need to Know About “All Roads Lead to Fitz”