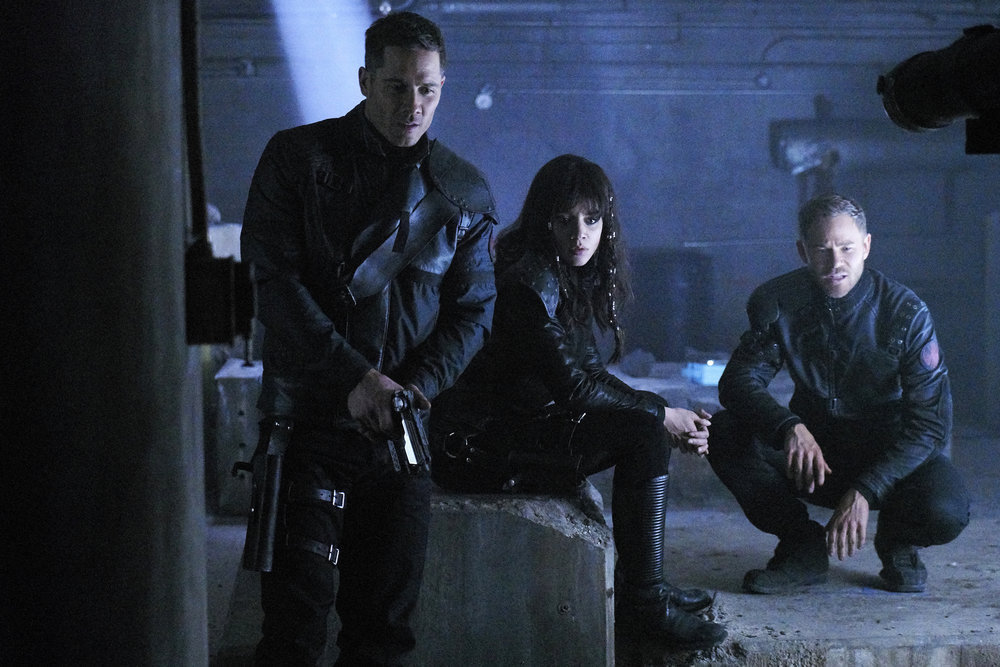 There’s a weird disconnect/reconnect thing that happens when you’ve spent a chunk of time crushing on a show and have also had the luxury of speaking at length with the people who make it happen. Killjoys has been really special for me because for the last three years, I’ve been a fan first and blogger second, with the ridiculous good fortune to meet some of these fine folks. Now that we’re nearing the home stretch, every episode is more precious.

This week’s episode is built to break you into teeny, tiny pieces, and very hopefully, the episodes that follow will put us back together. It’s also extremely, wickedly funny. In typical Killjoys fashion, there’s fighting and heartfelt confessions and biting, wounding old family drama rearing its ugly head, plus terrific comeuppances and even singing.

The A thread is that Johnny has absconded with D’av in search of a Green fix, and his psychosis is amping up in ways that are particular devastating for his big brother. All the while, the Dutch in his head is trying to get him to rise up against his Hullen urges.

The other storylines involve Delle Seyah working her way out of a potentially gruesome scenario at the hands of the planet’s warden (Bellevue‘s Billy MacLellan) and managing to keep her Queen cool intact. Mayko Nguyen is so good as a very pregnant woman who is just OVER all the bullshit and still quite capable of throwing down if she can’t verbally decimate you.

Zeph keeps showing off her big brain, more determined than ever to get the boys and Dutch back, and yet there’s still time in there for Pip to suss out whatever *they* are now that they’re not in hiding anymore. We also get some fabulous Pree pearls, one of which had me rewinding and repeating and snorting my Diet Coke.

Throughout the episode, I found myself literally perched on the edge of my chair, leaning closer to my laptop, completely besotted with just how damn good everyone is. I’m so proud of this cast, and everyone who makes this show we love.

Aaron Ashmore and Luke Macfarlane go All. In. on their scenes. Remember last week when D’av made the promise to Johnny that he would wreck him if tested? Well, this week that promise bears out. They wreck each other and us.

And as much as Ashmore goes bigger and broader while Johnny loses his human tether, Macfarlane’s performance grows smaller and quieter. D’av is closer and closer to defeat but still trying in every moment not to do the thing he knows he can and may have to do to save his brother.

Finally, the last two minutes are another song-overlaid vignette that’s rewind, repeat, sob-worthy–“The Edge of the World” by GAITS. I can’t wait for y’all to see this episode. Samir Rehem, who directed last week’s episode, directs a script by Julian Doucet.

Killjoys airs Friday night at 10 pm/9c on Syfy and Space Channel. The first two episodes of Season 4 are available online at each networkâ€™s site and through their apps. ICYMI, all of our Season 4 coverage, including previews and exclusive interviews, is here. Here’s a sneak peek of “Bro-d Trip.” Check back after the East Coast airing for my exclusive interview with Julian Doucet.

The Lid Comes Off "The Box" in Castle Rock