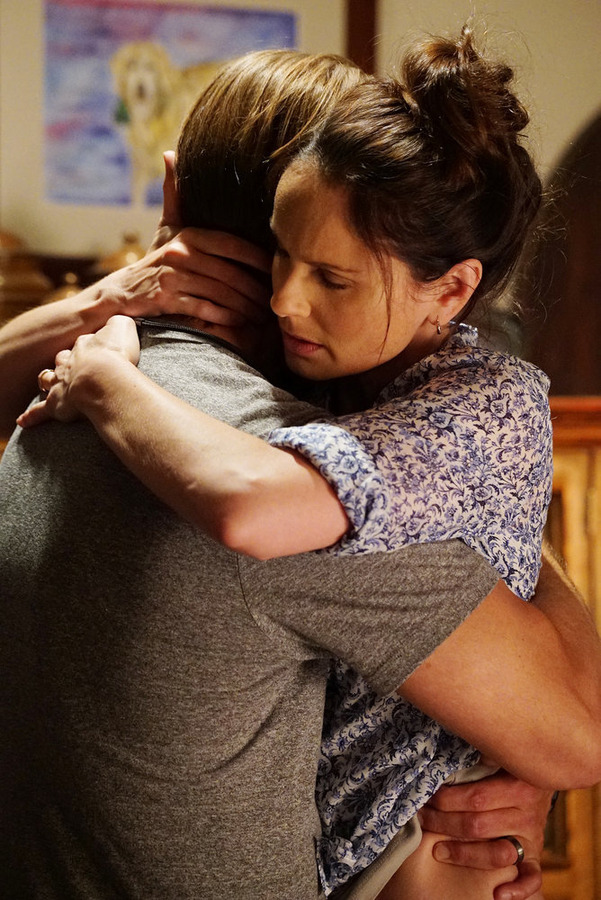 I’m not sure what I was expecting when I started watching this show, but I have to say I underestimated Colony. Hey, I’m willing to admit when I’m wrong. Even though I’m a pretty big fan of Carlton Cuse and loved everything the cast had to say about the series when I talked to them at Comic-Con last year, something about this show was making me feel meh about it. I watched and liked the pilot, but it wasn’t until this morning that I can truly say I became a fan. What happened, you ask? I watched the next 2 episodes and got completely sucked into this story.

Not only do I love that Josh Holloway‘s Will is caught in a never-ending Catch 22 — at least for now — but I love that Sarah Wayne Callies‘ Katie is working for the enemy. I was surprised to learn she was a member of the resistance, but both she and Will are doing what they feel they must to reunite their family.

I have a lot of questions, but I’m happy with the way the drama is unfolding. Part of me wants Katie to confide in her husband so they can work together. But I also understand her hesitance to do so. Will’s so new to his job. Yes, he’s impressing the right people right now and getting results quickly, much to the chagrin of Carl Weathers‘ Beau, but Will doesn’t truly know who his allies are yet. There will come a time that Will has to suspect Katie’s the leak, but for now she’s being pretty smart about how she extracts information from him. I’m personally very interested in learning more about Kathy Baker‘s Phyllis. Is she friend or foe? What does she have at stake in all of this?

But at the heart of it, this is a story about the resistance. Some are happy to succumb and do what they can to cooperate and collaborate. Some will do anything they can do defeat their oppressors. The human race has been colonized, but we still don’t know much about the invading army. The collaborators — both reluctant and eager — and what seems to be a growing movement to oust those in charge are at war. But it gets murky when we start thinking about where people’s loyalties lie. Katie managed to get Tory Kittles‘ Broussard to promise not to hurt Will. But can he be trusted? We watched Broussard kill a member of his own team in the last episode. And how long will Katie’s position insulate her and her family from harm? Even if Katie doesn’t agree with their methods, she agrees with Geronimo’s endgame. Right now she’s important enough that she’s safe, but who knows how long that will last, especially since Bram seems to have found a way to the outside and has been rebelling in his own small way.

Will continues to earn the respect of his new colleagues, but when his home comes under an attack, everyone is a suspect – even those closest to him.Â Â  Meanwhile, Maddie finds a way in to the upper echelon.

That’s a bit vague, right? No worries. I can also tell you that Adrian Pasdar and Kathryn Morris will make their debut in tonight’s episode. I, for one, am excited and can’t wait to see how their characters, Nolan and Charlotte Burgess, fit into this brave new world.

I was also really excited to hear that Colony has already been picked up for Season 2. So, if you were waiting to start watching for any reason, you should go ahead and make the commitment.

USA Network President Chris McCumber has this to say: â€œCarlton and Ryan have successfully delivered a story that tests the strengths and weaknesses of a society in duress, and the bonds of a family divided. Colony‘s performance across all platforms has been impressive, and we canâ€™t wait to see where the story takes us.â€