First of all, wasn’t this week’s Castle great? The banter between Castle, Beckett and Natalie Rhodes was stellar. Det. Kevin Ryan getting engaged was truly a sweet moment. “Nikki Heat” also featured several great guest stars. Laura Prepon from That ’70s Show as the actress chosen to embody Nikki Heat on the big screen did a fantastic job. Melrose Place’s Thomas Calabro was the murderer; Melody Thomas Scott from Young and the Restless played the soon-to-be ex-wife of a gazillionaire that was played by an actor who once played a villain on ABC’s General Hospital (Stephen Macht). But the guest star that I was most pleased to see was Randall Batinkoff. I almost didn’t recognize him and he wasn’t on for long. He played the matchmaker’s ex-boyfriend, Brad Williams. I don’t mind saying I used to have such the crush on this guy back in the day.

He was in the movie For Keeps? with Molly Ringwald (not a good film at all). But his most noteworthy credit, to me, is 1992’s School Ties. 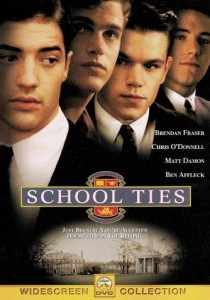 Set in the 1950s, Brendan Fraser played a Jewish teen who enrolled at an elite prep school that happened to be filled with bigoted students. The cast in this film was awesome. Starring alongside Batinkoff and Fraser were: Matt Damon, Chris O’Donnell, Ben Affleck, Anthony Rapp (Mark from the original Broadway production of Rent), Cole Hauser and Amy Locane. Batinkoff played a character named Rip Van Kelt. How richie-rich and stuffy is that? I don’t remember that much about the movie. I do remember drooling over the actors.

His TV Ties over the years include starring in the short-lived family drama Christy with Life Goes On’s Kellie Martin as well as guest-star shots on Buffy the Vampire Slayer, Dirt and CSI Miami. More notably, he played Hugh Hefner in the USA Network movie, Hefner Unauthorized. I admit it. I totally watched that movie.

It was good to see him again. It made me flashback to his School Ties days. I think it’s time he gets a permanent gig on another TV series.

We Need to Know: Is Castle Still Dating Gina?

Justified “Save My Love”