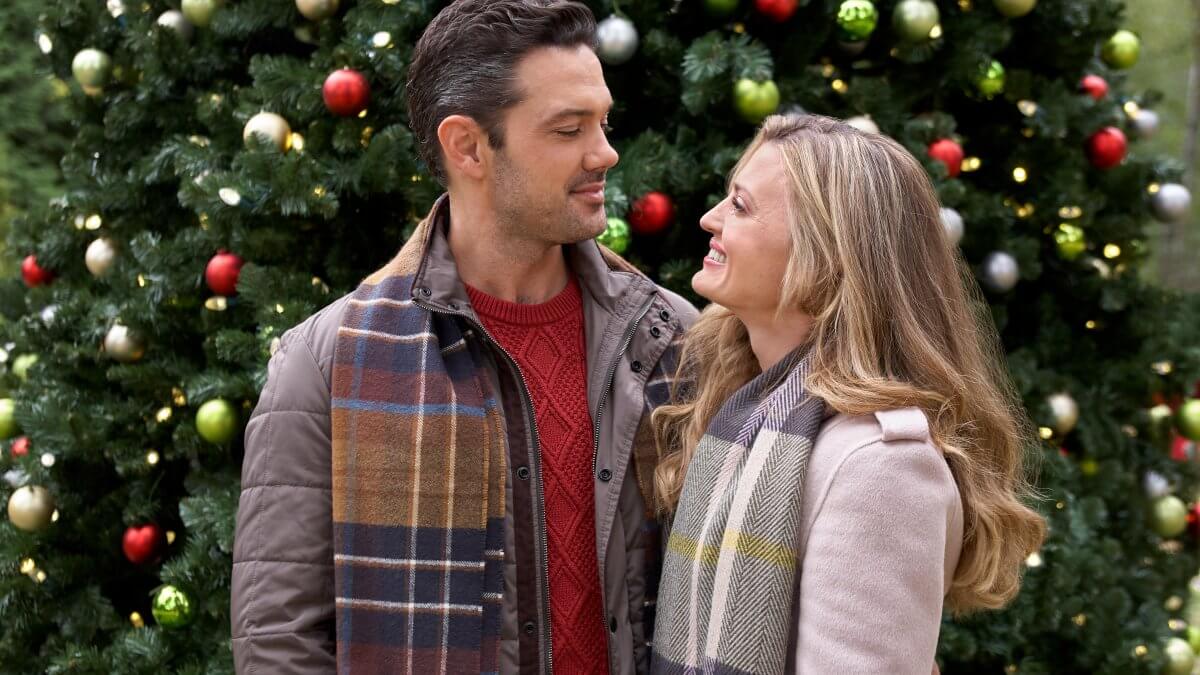 Hallmark’s Countdown to Christmas continues this weekend with A Fabled Holiday, a magical tale of characters at a crossroads. They all coincidentally (or not coincidentally) meet up at a special place that might change their lives forever.

The Synopsis: Talia (Brooke D’Orsay) and her childhood best friend Anderson (Ryan Paevey) unexpectedly reunite in a curiously familiar looking town full of Christmas spirit that restores its visitors during their times of deep turmoil.

At the center of this sweet, emotional story of lost souls finding their way are Hallmark vets Ryan Paevey and Brooke D’Orsay. This is Paevey’s second Hallmark flick of the year, having starred alongside Ashley Williams in one of 2022’s summer nights movies, Two Tickets to Paradise.

Paevey plays Anderson, who’s a doctor with a secret. The medicine man decides to take a break from his job and he somehow ends up at a place where he reconnects with an old friend and makes a few new ones. It’s a special town with a history of healing and restoring.

“I think this is the first time [I] really got to dabble in some magic on this. We got to literally step into a fairytale,” Paevey shares.

Ultimately, there are a few questions his character must answer. Can he heal from the issues that plague him? Can he open his heart to what’s right in front of him? And why does this town feel familiar?

Aside from the magical vibe of the story, there are several other reasons Paevey’s excited to be part of A Fabled Holiday. The first is his co-star. Both he and D’Orsay are regulars on the Hallmark Media circuit, having joked about getting paired together when attending the same events. Paevey says when he found out his latest co-star was finally going to be Brooke, he was stoked.

“She’s a much better actor than I am, that’s for sure,” he laughs. “I’m really good at the left brain stuff, though. So my job on set was to do my best to keep up with her and make sure she’s got coffee and a jacket.”

Many of the actor’s fans are sure to remember him from his days playing a cop on the daytime soap, General Hospital. Well, in A Fabled Holiday, his character’s a doctor, a profession he’s happy to tackle. “You don’t get to see me do a lot of doctor-y stuff, but there is one scene where I get to utilize a little bit of medical expertise.”

“I always relish an opportunity to play a character that works in an intellectual field,” he continues. “So whatever little taste I can get, I will take. I liked that Anderson was intellectual. I liked that he was a doctor. I think Anderson’s a solid guy.”

While the love story between Talia and Anderson takes center stage, the movie also has more of an ensemble feel. Other characters find themselves lost in their lives and their relationships. Paevey savored the opportunity to be a part of this group of great actors.

“Oh God. We have some people on this film that are unbelievable performers,” Paevey says. “I kind of laugh on almost every film, like this is the one they’re going to find out I don’t know what I’m doing. Our entire cast is spectacular. I mean, I was constantly blown away everyday on set.”

All in all, he feels this movie offers everything you need and more. “We pull some [inspiration] from, The Neverending Story, from Narnia, we’ve got a little bit of magic and we’ve got [acclaimed violinist] Lindsey Stirling performing some of her music, which is unreal. And we’ve got this ridiculously talented ensemble cast.”

Once Upon a Christmas Carol

For the holidays, the Fortunate Wanderer founder branched out and explored new territories like the voiceover universe. He recently debuted in an Original Story from Audible called Once Upon a Christmas Carol. Paevey’s super thrilled to add this skill to his repertoire. He says it was a blast and he’d love to do more.

So catch his voice in Once Upon a Christmas Carol and his whole handsome self when he stars in A Fabled Holiday, which premieres Saturday night at 8/7c on Hallmark Channel and 8 pm ET on W Network in Canada. As a reminder, you can stream Hallmark Channel and Hallmark Movies and Mysteries on Peacock here. Here’s a sneak peek.