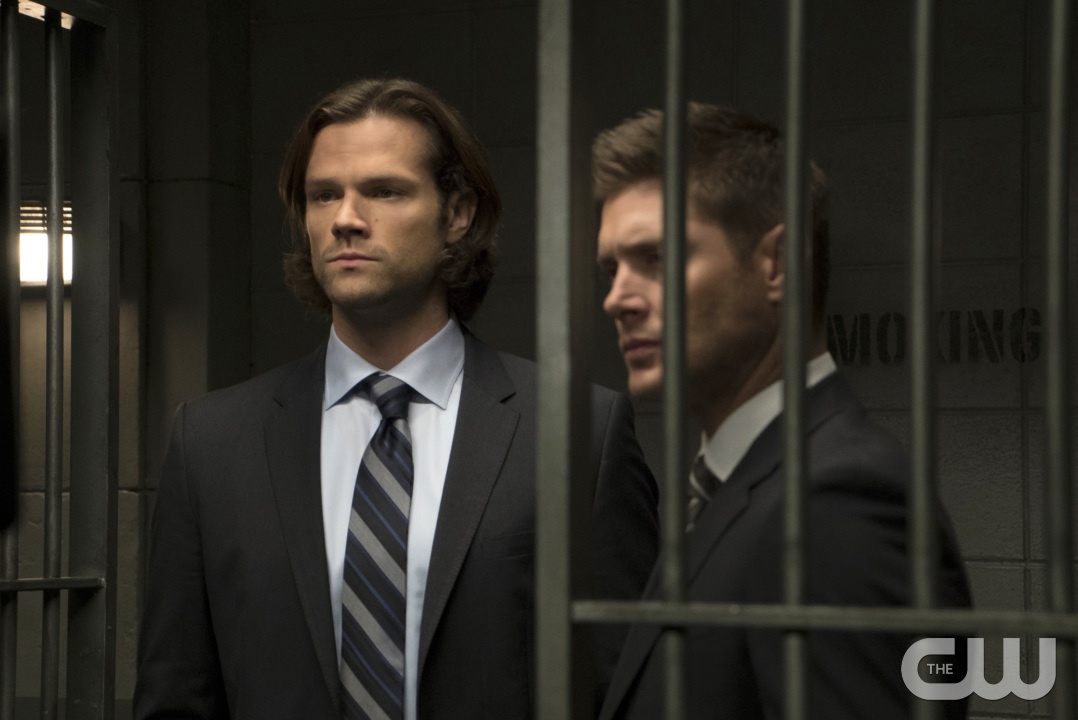 All four series regulars are in this one. The episode’s big question: Will the boys be ready to face Amara? Sam and Dean are on a mission. But this is episode six of Season 11. There’s no way they’re going to do much harm yet, right? They don’t know what she’s capable of and they don’t know how to hurt her. Amara’s growing fairly rapidly and that’s scary. I’m anxious to see what damage Sam and Dean feel they can inflict. Or will they be the ones to come out of this whole thing bruised and battered?

In Vancouver, Jensen talked about Dean’s connection to Amara. Even if the brothers get close to her, he’s not going to be able to do anything, right? Maybe Dean doesn’t understand exactly what she meant when she said they can’t hurt each other. Shouldn’t he tell Sam that this may be a possibility? Or is there some way to use Dean’s connection to bring down Amara? Inquiring minds want to know.

No way can the Winchesters do this alone. Thankfully, Sam and Dean make a call.

So Cas turns to Metatron for intel, who’s a videographer for the local news. Hilarious. Why can’t I stop thinking that Metatron is a lot like Jake Gyllenhaal’s creepy ass character in Nightcrawler? Anyway, it’s our first Meta sighting for the season. While The Darkness is priority, I’m wondering whether the demon tablet is a topic of conversation. Meanwhile, Crowley seems to lose sight of Amara. Does that mean he’ll connect or clash with the Winchesters over the location of this terrible “teen?”

When TV Goodness was in Vancouver, we took part in group interviews with the cast. We’ve already shown you a lot of what Jensen and Jared had to say. One of the clips I really enjoyed was their debate over whether The Darkness is evil.

Next up, Misha Collins. This Season 11 chat took place in mid-October right before “Baby” aired, so there’s a lot of talk about that awesome episode. Much like Jensen and Jared, Misha was bruised up thanks to TV magic. We do our best to extract some info on what’s coming up later this season. But there’s not a lot heÂ could give away.

In the second part of Misha’s interview, he first addresses whether there’s fallout from Sam and Cas hiding the fact they made a deal with Rowena to remove the Mark (now the secret is out, that is). He also talks about Jensen as director.

Supernatural airs Wednesdays at 9/8c on the CW.

Moment of Goodness: Tony and Jeanne On the Plane Home, NCIS "Saviors"

Why You Should Be Watching: AMC’s Hell on Wheels