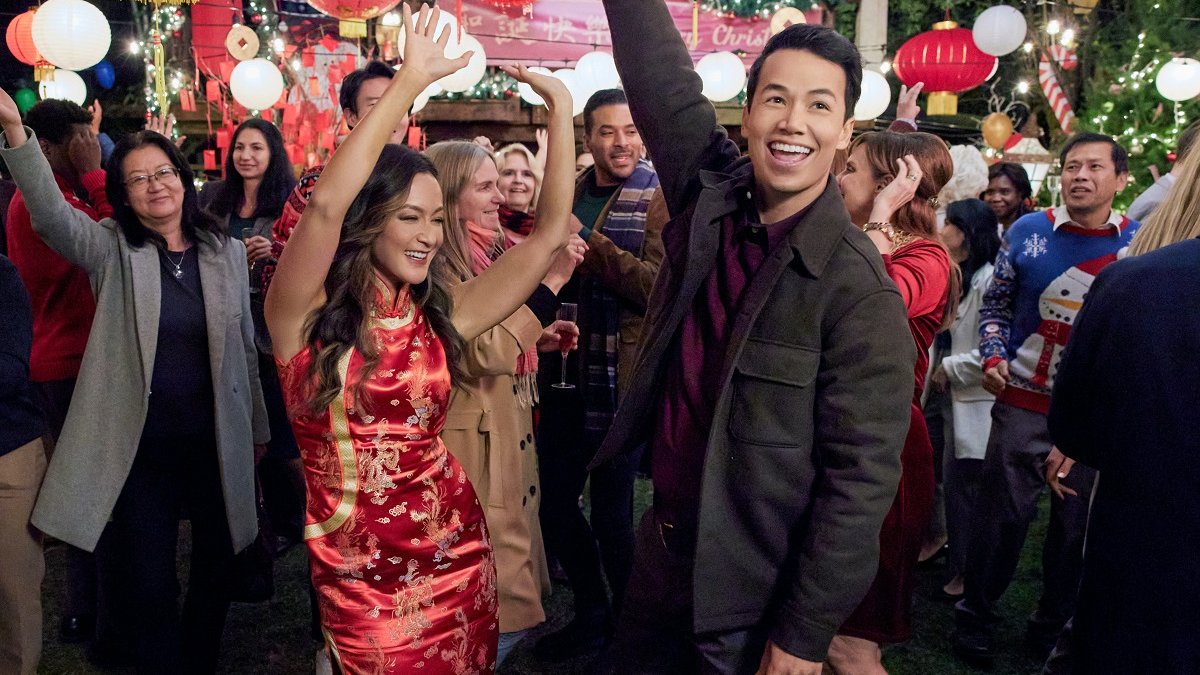 Friday night, Hallmark Channel goes big and goes home with A Big Fat Family Christmas. Shannon Chan-Kent and Shannon Kook star as Liv and Henry, a social media influencer/photojournalist and writer who are teamed up by their newspaper’s editor, Charles (Jack Wagner) for a potential cover story about a local Nob Hill Christmas extravaganza called The Changtastic Christmas.

What neither Henry nor Charles know is that Liv, who uses the last name Rose professionally, is actually one of those Changs, which include the party’s hosts, Jack (Yee Jee Tso) and Ivy (Tia Carrere), and her brother, Andrew (Harrison Sima), who take great pride in the annual event that both brings together and gives back to their San Francisco community. Liv’s holiday interests lean toward the subdued and restrained–the polar opposite of “the bigger, the better” mantra of her family, a lingering holdover from being bullied as a school girl for her Asian heritage.

Pretty early into the film, Henry figures out who she really is, which is nice that it doesn’t drag the whole movie. Once the white lie is out in the open, she and Henry take a more active role in bringing the party to life, and she starts to appreciate her family and their heritage, and the care and effort they have invested in their over-the-top soiree. It’s a similar theme to last week’s Haul Out the Holly–if you can’t beat them, join them.

It’s a beautifully lush movie full of vibrant decorations and costumes, and it’s an affectionate story of family and community with a little romance thrown in as Liv relaxes her more formal tendencies and takes Henry’s lead on enjoying the season. There’s a hiccup from that, of course, but it has a sweet reward later.

I love that From director Jennifer Liao joins the Hallmarkies fold with this movie, directing a script by Justine Wetzell-Chang and Blaine Chiappetta.

A Big Fat Family Christmas premieres Friday at 8 pm/7c on Hallmark Channel in the US, will be streaming on Crave in Canada on Saturday, and airing linearly in Canada at 7 pm ET on CTV Life on December 9th. As a reminder, you can stream Hallmark Channel and Hallmark Movies and Mysteries on Peacock here. Here’s a sneak peek.