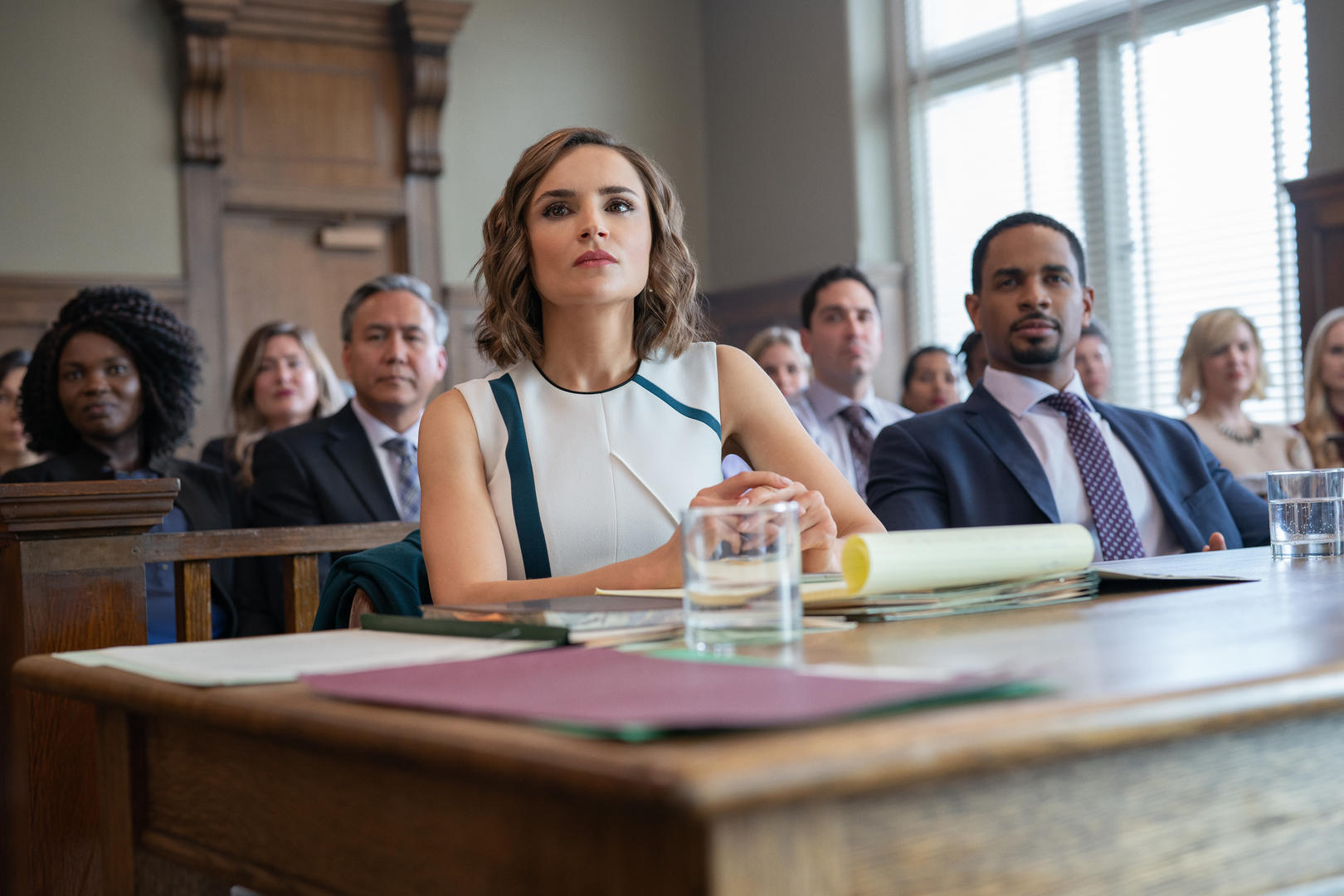 Here at TV Goodness, we love a good romcom [Exhibit A: TV Movie Goodness] and we’re not alone. Their success has led Netflix to ramp up its slate, and Thursday, Love Guaranteed, starring Hallmark darling Rachel Leigh Cook and Damon Wayans, Jr., hits the streamer. This week I chatted with director Mark Steven Johnson about the film, written by Falling Inn Love and Fir Crazy scribes Elizabeth Hackett & Hilary Galanoy.

The movie, set in Seattle (and lovingly filmed in Vancouver), tells the tale of Susan Whitaker (Cook), a lawyer who often works pro bono to defend the little guys. Her partners in crime are the hilarious admin staff Roberto and Denise, played by Sean Amsung and Hallmarkie fave Lisa Durupt. With bills piling up, she begrudgingly takes the case of Nick Evans (Wayans, Jr.), a disgruntled online dater who wants to sue the titular website Love, Guaranteed (whose CEO is the delightfully daffy New Agey Tamara Taylor, played by Heather Graham) for its failure to deliver on its promise of true love. Soon, Susan and Nick fall into an easy friendship and get much more than they bargained for.

Director Johnson is mostly known for big-budget features like Daredevil, Elektra, and Ghost Rider, but he also cut his teeth on romcoms with 2010’s When In Rome and 1995’s Grumpier Old Men. When this movie came his way, he was ready to jump into something light and happy–and that was before the world started to burn this year. “My true love is comedy and romantic comedy. When Harry Met Sally is as the top of my list. I really wanted to get back to comedy. It’s what really makes me happy,” he shares.

“And then this script came across. Rachael came up with the idea and she’s the producer and the star. And I went in to meet and I just fell in love with all of them. I said to everybody in the room that day, ‘My goal for this movie [is] to put a little goodness out there. I just want people to have 90 minutes of laughter and feel good and feel better coming out of the movie than going in.'”

In the film, Johnson gets a chance to throw a wink to When Harry Met Sally with a leafy walk-and-talk scene. “That was really important to me. It’s just one of my favorite movies of all time. I liked this formula. There’s nothing wrong with a formula that works.”

“And two people that meet and, and don’t like each other and can’t stand each other and then find their way to falling in love. I love that. So, for me, it was that kind of vibe. I was thinking also about all those little intermittent scenes of people on camera talking about how they met and that’s all online now. When I was with the crew…out doing a location scout, I asked how many people here met their partner through online dating [and it was] six people.”

Johnson enjoyed filming in Vancouver, and tapping into the Canadian talent onscreen and off. Aside from Durupt, the cast includes familiar faces Kandyse McClure and Alvin Sanders. “They killed it. I think it’s just probably the best cast I’ve ever had,” he says. “I thought all the local actors were just absolutely killing it. And Sean and Lisa are both so fantastic. They’re like an old-fashioned comedy team. If one one of them did improv, the other one’s right there. They just had me in stitches the whole time.”

“I found that across the board, everybody was so good. Just hitting it out of the park. I really pushed for Vancouver. It’s got so much character to it. I wanted the fall and the leaves turning and I wanted that beautiful Gastown vibe, like Pioneer Square has in downtown Seattle and the beautiful Chinatown. It’s just got so much texture and beauty to it. My DP, José [David Montero] is so talented. I was so happy to be shooting there.”

That comfort level helped, too, with the finale scene, which was captured quickly. “We had one night to get…this is big emotional scene. And there’s so much going on and we really had like one take to get it,” he recalls. “And I’m pretty cool on set…usually keeping everybody else calm and I was wired. And I remember Damon and Rachel coming to me and [they said], ‘Don’t worry, we got this. It’s gonna be fine.'”

Next up. Johnson is writing an original film he describes as Under the Tuscan Sun meets War of the Roses.

Love, Guaranteed will be available on Netflix on September 3rd. Here’s a sneak peek.

Photos and Video Courtesy of Netflix.