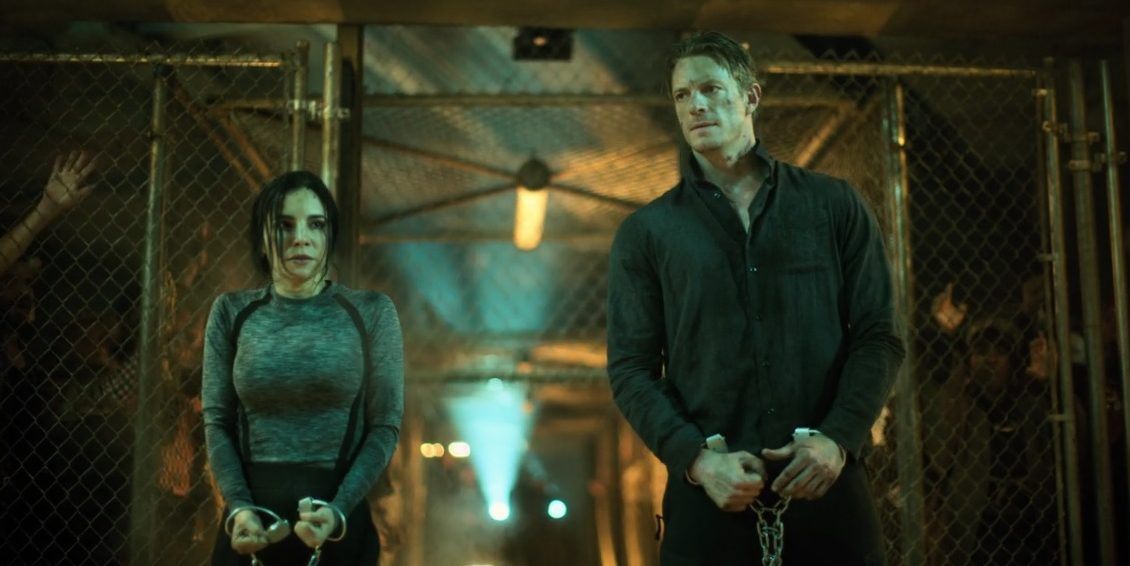 Hey, so a long weekend is upon us and perhaps you’re looking to binge something at home or while traveling this weekend? I wrote earlier this year about Altered Carbon, and while I intentionally took it one episode at a time, its 10-episode first season is totally bingeworthy. Here are my Top 5 Reasons why you should add this one to your queue.

Joel Kinnaman is back on TV

File under “duh,” but just in case you missed out entirely on The Killing (which is also on Netflix), and only know him from Suicide Squad, Kinnaman is really, really good at the dramatic roles. Yes, in this, he’s a smartass, bulked up, and completely capable of ass-kicking (which he does, A LOT), but he’s also playing two separate people, and then a commingling of both and he unleashes a fantastically layered performance that’s at times ferocious and quietly heartbreaking.

Altered Carbon has a huge, and hugely diverse, multi-national and multi-ethnic cast. Martha Higareda is the defacto co-lead, playing Kristin Ortega, a detective with her own agenda that becomes painfully clear around the mid-mark and then kicks her and Kinnaman’s performance to a complete other level.

His other partner is Vernon, played by Chicago Med‘s Ato Essanoh, who is beholden to Kovacs and then steps up to come into his own. Will Yun Lee of Falling Water plays another iteration of Kovacs in teasers here and there and then completely in “Nora Inu,” where he stars opposite RenÃ©e Elise Goldsberry, who also appears sporadically until this episode.

The hour is wholly dedicated to unpacking their origin story, and it gives us a better look at Reileen, Kovacs’ sister, played by Dichen Lachman. Ortega’s police partner, Abboud, is played by Waleed Zuaiter of USA’s Colony, in a really beautiful role. Ortega’s Mom, Alazne, is played by Fear the Walking Dead‘s Marlene Forte.

No spoilers here, but one of the throughlines in the season involves people falling in love and lust at their own, and often, each other’s, peril. We get a central love story that spans centuries, a new love story grounded in an old romance, a very long, century-spanning love story that’s based more than a little bit on rage and betrayal, and a love story that’s flipped a bit based on the actual body of one of the partners.

Aside from the general futuristic Blade Runner-esque look and feel, the central plot device of Altered Carbon is that the body is a host for a “stack,” an implant that renders the body “alive” and retains the consciousness and memories of the actual human being. There’s a secondary push and pull between factions who hold onto the notion that the soul trumps that arrangement.

AI is also everywhere, and one of the main characters in the proceedings, exquisitely played by Chris Conner, is wholly AI, rendered to be human in every way except corporeally. It’s a performance that’s a genuine joy to watch. And AI becomes healing, giving some characters the closure that would otherwise elude them. It’s also interesting that even in this future, the world still needs hackers to get things done.

Altered Carbon spent months shooting in Vancouver and tapped several Canadian folks that we were already pretty fond of. Most prominent is Kristin Lehman (Ghost Wars) as Miriam, the monied and powerful wife of Laurens (James Purefoy), who adeptly plays the role her husband wants while not-so-subtly bristling at the restraints of her long life and marriage.

iZombie‘s Hiro Kanagawa is a police captain who’s in over his head trying to keep the peace and still walk the line among the haves and the have-nots. Michael Eklund (Wynonna Earp) and BSG‘s Tahmoh Penikett play a couple of particularly aggressive henchman. Arnold Pinnock (Travelers) plays a facilitator with unclear alliances. Hallmark folks like Fiona Vroom and Chris McNally also appear in supporting roles.

Altered Carbon is available now on Netflix. If a full binge isn’t your thing this weekend, but you have time for a few episodes, you can find my individual previews here. Enjoy!

Finale Puts Krypton on a Highway to "The Phantom Zone"