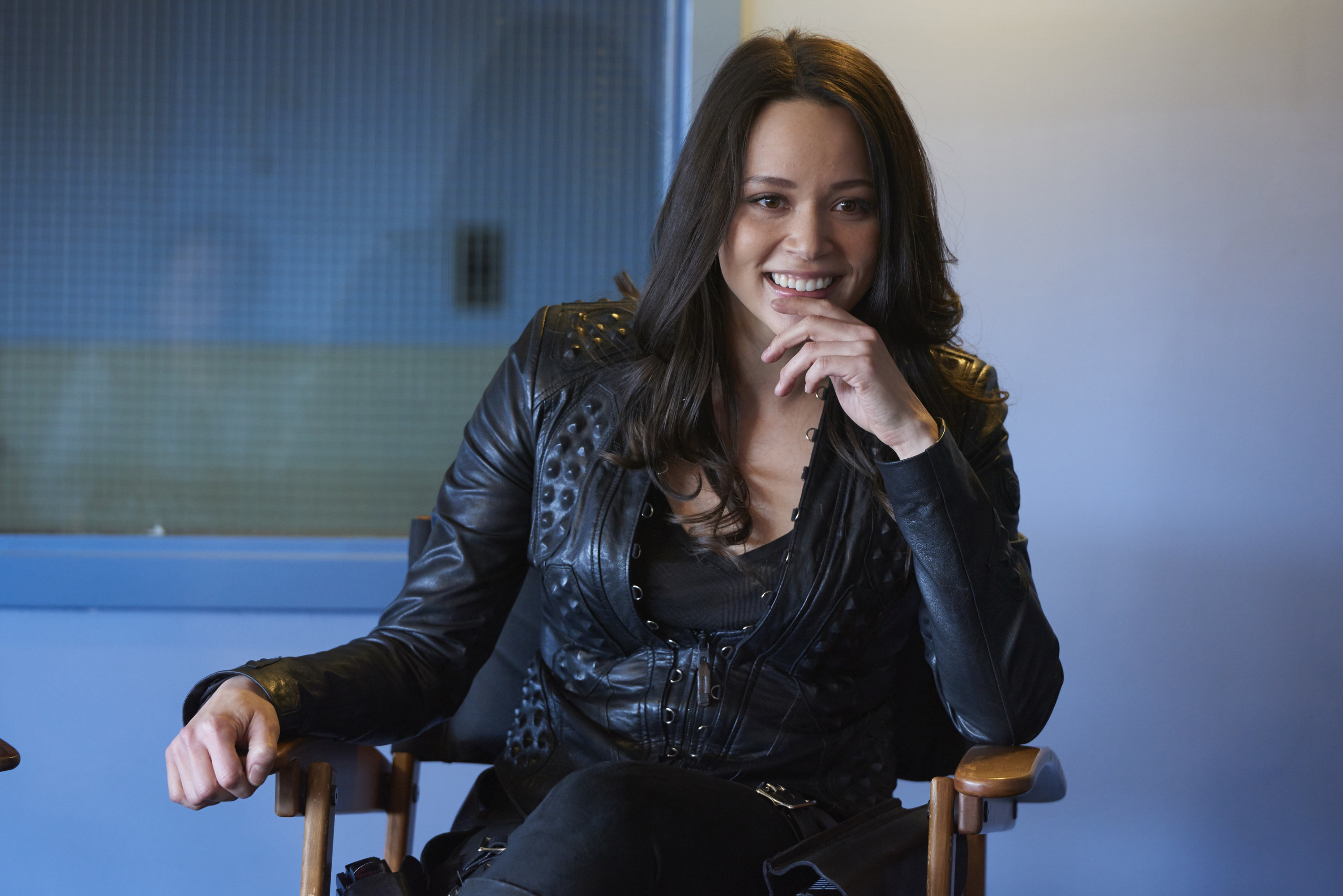 Just two more sleeps until the return of Dark Matter, so hereâ€™s another tease from our set visit in February, as cast member Melissa Oâ€™Neil talks about the fallout from the finale and whatâ€™s next for Two.

Oâ€™Neil says her character keeps a lid on what she knows about Six (Roger Cross) and his betrayal.Â â€œ[Sheâ€™s] the only one that actually saw it was Six, before he zaps her and she passes out. When she wakes up, she knows who betrayed them. For the most part she keeps this to herself,â€ she says.

â€œAs ever, she is level headed about what is going on…I think she wants to know â€˜why did you do this?â€™ Along with Five, she has always felt they are a team and have built this family and that kind of betrayal, I donâ€™t think any of us saw that coming.â€

â€œWhen [Two and Six] do ultimately meet, it feels likeâ€¦a discussion. Not a crazy assault. This abuse she puts onto him for betraying them, itâ€™s more about, â€˜help me understand what you were thinking, what were you doing, as I thought your loyalties were with us,â€™â€ she points out.

â€œEven though she has her own moral compass, where she tries to figure out whatâ€™s right and whatâ€™s wrong, how to navigate these situations, her loyalties always lie with the ship. If things went wrong, she would still be there with her crew and thatâ€™s whatâ€™s hard to understand as she thought they had that in common.â€

Going into season two, Oâ€™Neil gets to be more physical in the role. â€œOver the summer, I had been training a lot to work with explosive weight training to get those fast twitch muscles going,â€ she explains. â€œI felt a huge difference, I felt like I was fighting really fast and itâ€™s nice to get that feedback. Mel[anie Liburd] is a great fighter and her stunt doubles fantastic.â€

â€œI think thatâ€™s going to be an interesting way to kick off that episode and introduce that new character and get some action going. There was only one other fight last season where Two is fighting a woman and that was Shaunâ€™s sister. That was a great fight.â€

Two and Nyx (Liburd)Â strike up a friendship thatâ€˜s built on more than competition. â€œI love how they start off sizing each other up as they obviously donâ€™t know whatâ€™s going on when they are inside the prison. I think there is a sisterhood building between these two. I think if anything they are not put off or made to feel defensive about the other strong woman in the room,â€ she says.

â€œIn fact they are empowered by it and impressed that there is another chick that can hold her own. I think thatâ€™s exciting to see as everyone wants to see that in the world in general, for woman to be bolstering each other. Iâ€™m proud we get to display a strong female relationship like that.â€

As for Devon (Shaun Sipos), Oâ€™Neil says she regards him is more of a curious way. â€œThereâ€™s no reason to be threatened, he has something to add and letâ€™s be real, itâ€™s nice to have somebody with a mug like that for a face on the ship,â€ she laughs. â€œFor the most part he remains an enigma as he doesnâ€™t open himself up to her and she doesnâ€™t know whatâ€™s going on there. She tries to pry a bit but sheâ€™s not going to drag it out of him. It remains to be seen whatâ€™s going to happen there.â€

The other relationships with the existing crew will also change. â€œ[The relationship with One (Mark Bendavid) and Two] will evolve in a way I think will genuinely shock the viewers,” she teases.” The relationship Two has with Five [Jodelle Ferland]Â goes through a good bit of struggle this season and we see both characters grappling with their inner selves and their inner selves dealing with each other. Thatâ€™s been a good landscape to explore as for most of us, our inner selves are very different to the external selves we present to other people.â€

We also discovered in season one that Two isnâ€™t wholly human, and Oâ€™Neil explains she wasÂ as in the dark as the audience about where that leads. â€œI imagine we will explore that a bit more. We know she isnâ€™t exactly human but if you open her up she has flesh, guts, blood, and a heart,â€ she explains. â€œBut sheâ€™s got these nanites going through her, sheâ€™s been bioengineered and thereâ€™s something a bit different about her but that doesnâ€™t make her any [less] organic than everyone else.â€

Dark Matter airs Fridays at 10/9c on Syfy. Here’s another look at what to expect.