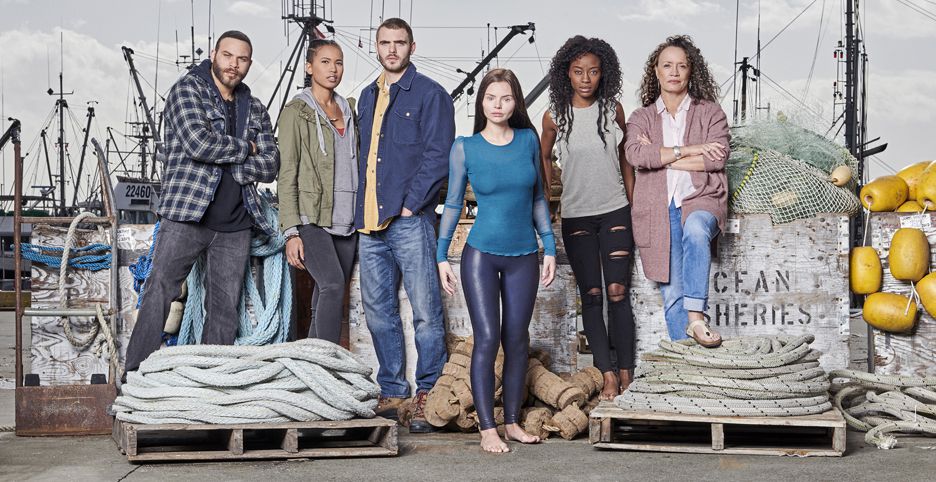 Set in Bristol Crove, Washington (a.k.a. the super-picturesque villages and waterfronts outside of Vancouver) the series begins when something in the water is accidentally brought on board a fishing boat, unleashing multi-pronged repercussions.

Alex Roe (The 5th Wave) plays Ben, a marine biologist who was next in line to take the reins of his family’s fishing empire until empathy kicked in and he changed gears toward preserving ocean life instead of hunting it. When his friend, Xander (Life’s a Drag‘s Ian Verdun) recounts the adventure on the boat, the most obvious supposition–that the town’s long-held touristy folklore about mermaids might actually be true–seems highly unlikely until other pieces of the puzzle fall into place.

The biggest puzzle piece is Ryn (Game of Thrones‘ Eline Powell), an initially mute young woman who arrives in town and attaches herself to Ben, his girlfriend and fellow marine biologist, Maddie (An American Exorcism‘s Fola Evans-Akingbola)–whose Dad (Yellowstone‘s Gil Birmingham) happens to be the Sheriff–and local shopkeeper and de facto town historian, Helen (Star Wars‘ Rena Owen). The trio work to protect and help her as her quest becomes clear.

It’s an intriguing story, beautifully filmed, similar to Lifetime’s Sea Change backdoor pilot last fall. With Siren, the characters are well past high school and there’s the mystery of Ryn plus a larger mystery, and both are folded in against the town’s somewhat secret history.

The performances are really good across the board, especially as the disbelief falls away and the characters switch gears to accepting what they see presented to them and take action.

Emily Whitesell (Finding Carter) executive produces alongside newcomer Eric Wald and Dean White (The 100), who conceived the story, and Brad Luff, Nate Hopper and RD Robb. Both of the premiere episodes were written by Wald. The pilot was directed by Scott Stewart (Defiance) and “The Lure” was directed by Nick Copus (Gotham).

Siren begins Thursday at 8 pm/7c on Freeform. Here are a few sneak peeks.

Ben McKenzie on Directing Gotham's "A Dark Knight: One of My Three Soups"