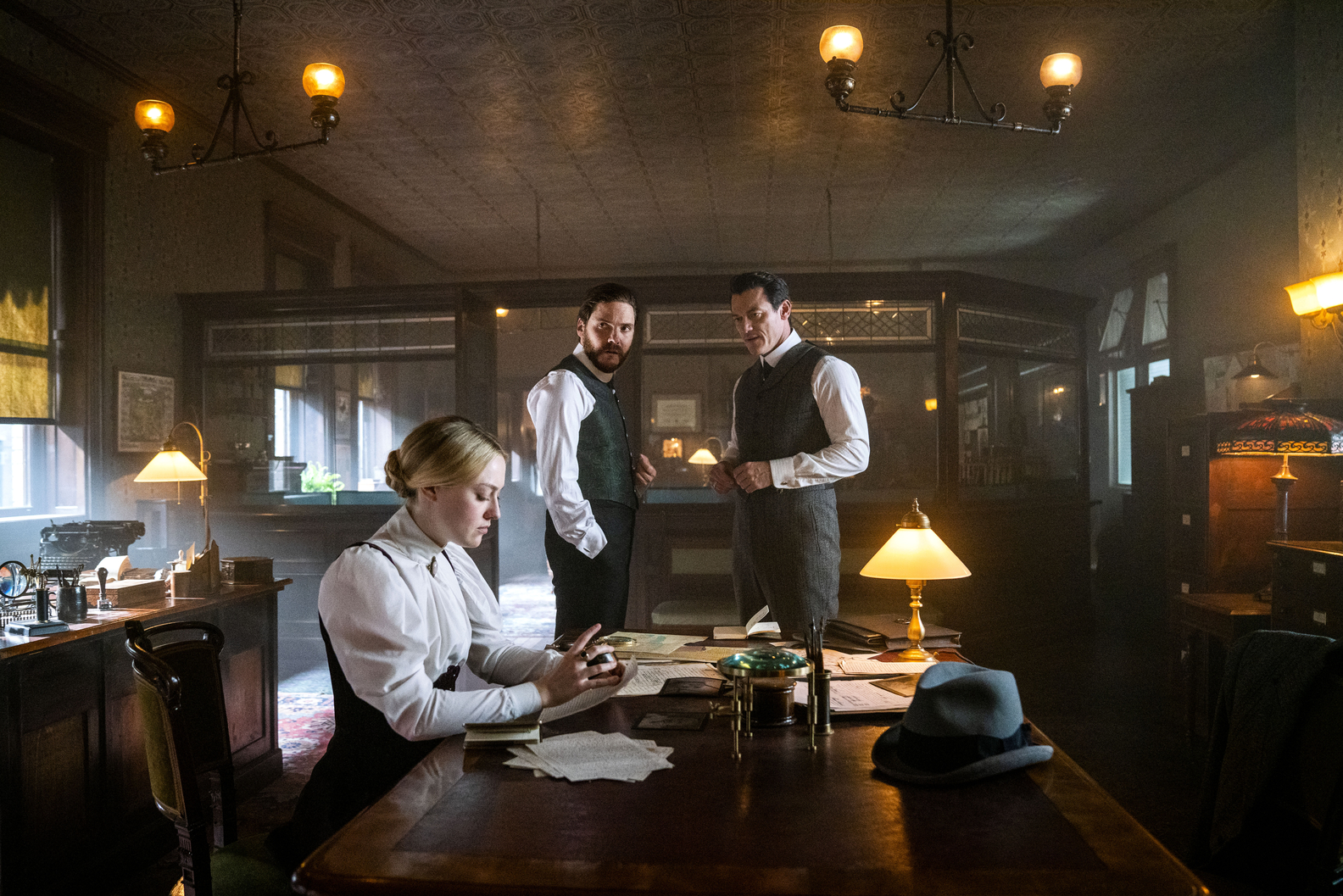 It’s been 27 months since The Alienist concluded its first season on TNT back in March of 2018. The “renewal” didn’t come until that summer, and it took another year for the series to go back to camera, but eight new episodes are finally here and they were well worth the wait.

I put renewal in quotes because it’s being billed as a separate series rather than a proper Season 2, which sort of makes sense and sort of doesn’t. Our extended tribe are all back a year after the mystery captured in Season 1, but this time, the action spins more around Sara Howard (Dakota Fanning), who’s running her own detective shingle.

Laszlo (Daniel Brühl) is at her service with his special insights into the criminal mind and John (Luke Evans) is now a reporter for The New York Times. That’s a bit complicated because he’s also engaged to Violet (Emily Barber), the daughter of William Randolph Hearst (Matt Letscher), the publisher of the Times‘ competitor paper, The New York Herald, which is more interested in selling papers than printing the truth.

As the season begins, we’re dropped into a baby’s kidnapping and the subsequent, very fast, execution of the presumed-guilty mother, which devastates the trio. The baby is still missing, which, in their minds, makes the execution a particularly brutal rush to judgment. Determined to find the child and exonerate the mother–and shame the doctor overseeing her care in the process–they’re soon redirected to a similar, and similarly terrifying, case.

The new case can put Sara on the map as a formidable detective, and she rallies her forensics team to get to the bottom of things. That includes includes NYPD detectives Lucius (Matthew Shear) and Marcus (Douglas Smith) Isaacson, Cyrus (Robert Wisdom) Laszlo’s former houseman who now runs a bar, and the all-female team in her office, led by her right-hand woman, Bitsy (Melanie Field).

It’s an emotional assignment for all involved, especially on the heels of the first case. Thomas Byrnes (Ted Levine), who’s no longer chief of police, also returns as a perpetual thorn in their side.

Treading the same territory as the first season, it’s alternately an opulent and gritty–particularly in some of the obstetrics scene–watch as the delineations between the haves (who have a lot) and the have nots (who barely survive) pull no punches.

The cast is so, so good, and I got a little ferklempt at having them back on my TV. They fall right back into the warm, familiar, protective, sometime-fractious rhythms of family members who have a unique shorthand and who’ve survived an experience that’s forever etched into their collective memory.

I’ll be previewing each episode this season, so that’s all you need to know going in. The Alienist: Angel of Darkness will air Sundays at 9 pm ET on TNT Drama. The series premiere is two episodes, back to back, so plan accordingly. Season 1 is now streaming on TNT Drama; click here for my first-season previews. Here is a sneak peek of Season 2.

Photos and Videos Courtesy of TNT.

The Alienist: Angel of Darkness "Labyrinth" and "Gilded Cage" Preview

The Musketeers Preview: “The Prodigal Son”