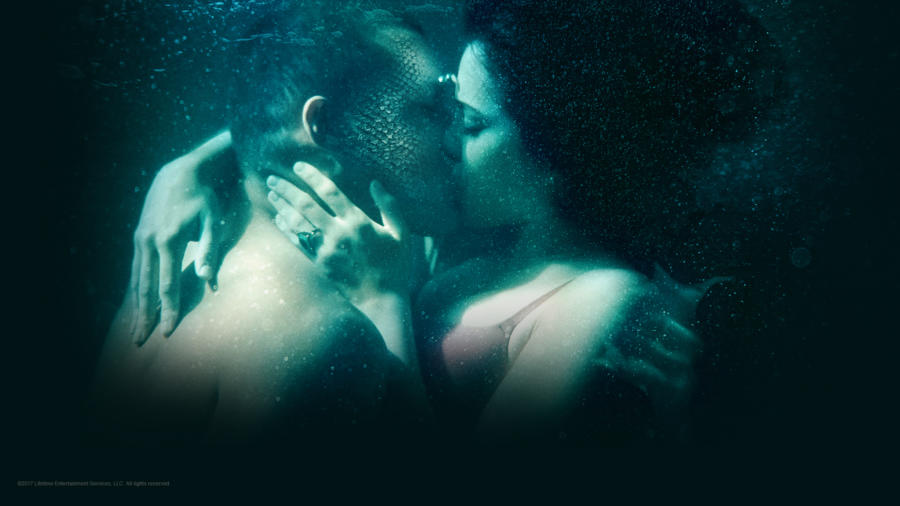 Alongside its Harlequin initiative, Lifetime is also leveraging the YA market with three premieres this weekend based on YA titles. Saturday night saw the back-to-back premieres of Ten: Murder IslandÂ and Drink, Slay Love. Sunday night, they go for the supernatural crowd with Sea Change, based on the novel by Aimee Friedman.Â Initially filmed as a series pilot lastÂ summer in Nova Scotia, this one was on my radar because it’s from the Haven producing team of Shawn Piller and Lloyd Segan.

Dabbling in the same moody territory of CW’s newest hit, Riverdale, but this time in and around Haven‘s old haunts of Chester and Halifax instead of Vancouver,Â the film is a haves vs. have-nots with a side of murder, secrets, and other thrown in.Â Incoming high school senior Miranda (newcomer Emily Rudd)Â is our point of entry to Selkie Island, where she arrives as the newest “Heir,” (i.e. a child of an original moneyed family) although this is her first foray home since she was “pre-verbal.” She’s been sent there by social services in the wake of the sudden death of her father (played by Piller in still photos).

Reunited with a mother (Maria Dizzia) she does not know, Miranda navigates the town through diametrically opposed allies, Cece (Lost in Space‘s Taylor Russell), the most balanced of the Heirs, who’s the daughter of mom Ameila’s BFF, another Heir, TJ (Keenan Tracey), whoÂ gives her theÂ lowdownÂ about the town on the ferry ride over,Â his rightfully threatened almost-girlfriend, Ginny (UnReal‘s Siohban Williams),Â and the mysterious townie, Leo (Skyler Maxon), whom she meets on the beach at dusk. Soon she finds herself in the middle of a class war,Â pesky love geometry, long-held secret histories, and murder.

Chris Grismer directsÂ and is right at home here after helming theÂ similarly-themed The Secret CircleÂ and The Vampire Diaries–it looks fantastic. Adam Giaudrone (Being Mary Jane) and Liz Sczudlo (Switched at Birth) adapted the book.

I have no idea if this is a litmus test to perhaps reboot the pilot and garner a series order, or if the story ends here, but Piller Tweeted it’s possible we’ll see more.Â It’s an intriguing story to keep going,Â albeit one that skews younger than fellow networkÂ series UnReal and Mary Kills People–which might not be a bad thingÂ if they’re looking toÂ shake up their viewership. With the success of Riverdale and the end of The Vampire Diaries and soon Teen Wolf and The Originals, there’s room on TV for Sea Change if Lifetime wants to give it a go as a weekly.

Sea Change premieres at 8/7c Sunday on Lifetime and repeats at midnight/11c. Here’s a sneak peek.