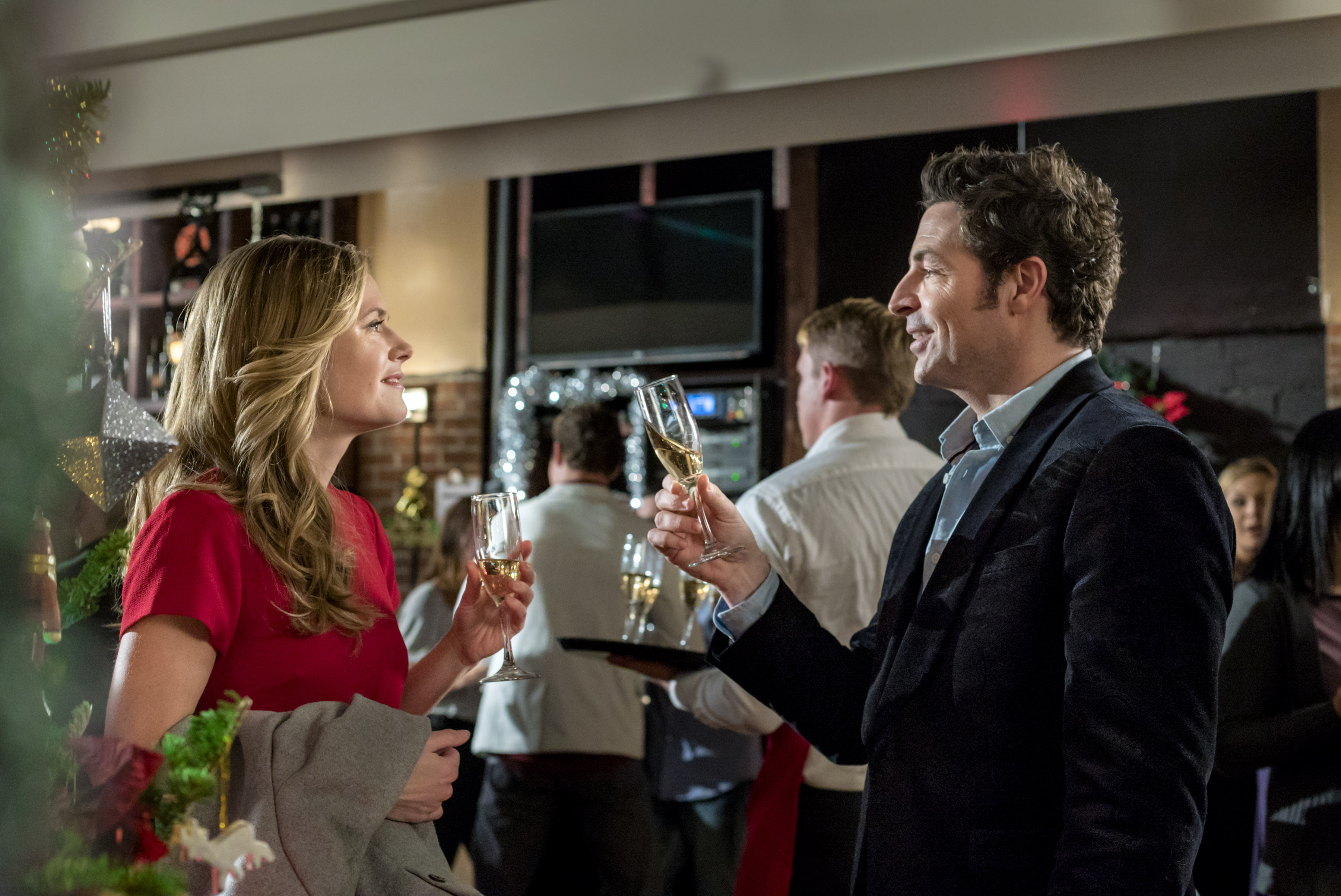 With winter weather descending on a good section of the U.S, it’s a great weekend to stay inside and binge the holiday movies. Here’s a look at eight airing over the next two days. Click here for a separate piece on Karen Kingsbury’s Maggie’s Christmas Miracle and my interview with Luke Macfarlane. Click on the titles below to go directly to each movie’s web page. Times listed below are first airing; all repeat through the end of the year.

An aspiring New York actress (Maggie Lawson, whose Christmas-timed Psych: The Movie is also now running on USA) is ready to pack it in and take a real job in Chicago after years of near-misses and bit parts until she lands the role of a lifetime in a new production of A Christmas Carol. However, the play’s director is the successful TV actor (Brennan Elliott) she blames for her biggest professional disappointment.

Lacey (Merritt Patterson) takes a rare break from work for the Christmas Eve wedding of her friend Ava (Brittney Wilson) and reconnects with her former flame, Ean (Steve Lund). The two decorate the cottage where the newlyweds will spend their honeymoon, and feel their chemistry return. One catch — Lacey is already dating her equally workaholic business partner, Roger (Victor Zinck, Jr.). When Roger arrives for the wedding, she has to decide who’s the best match for her. [Note: The preview below looks like it’s for another film Jared Padaelcki did with the same title, but it’s correct.]

A runaway bride, Kate (Cindy Busby), making herself scarce for the holidays, meets a ski patrol rescuer, Jason (Travis Milne), at a resort. Her December days begin to brighten, until her parents and jilted fiancé, Alex (Mark Milburn), show up at the mountain to reset the wedding for Christmas.

Photographer Holly Logan (Jana Kramer) returns to her hometown of Gulfport, Mississippi, which is resurrecting their traditional Christmas light show for the first time since a terrible hurricane struck five years earlier. Holly volunteers to pitch in, but soon has second thoughts when she discovers the festival is run by her high school sweetheart, Mike (Wes Brown). With help from her match-making mother, Caroline (Faith Ford), and Mr. Kriss (Barry Bostwick), the kind man who will play Santa in the town’s celebration, Holly begins to fall in love with her hometown, and Mike, all over again.

A real estate developer (Bobby Campo) is given the opportunity of his career to transform an old shopping complex into a prime location. Unfortunately, there is one tenant who is holding outâ€”the Christmas shop owner (Ellen Hollman) he met by happenstance just days ago.

A Madison Avenue executive, Amy (Denise Richards), discovers an unusual Christmas surprise when she inherits her Aunt’s hometown bakery and learns the other half was left to her long-ago boyfriend, Jack (Patrick Muldoon). Unresolved personal issues resurface between them, as the exes return home to co-manage the store, along with its traditional holiday cookie bake-off. Note: This one is also airing on ION on December 16th.

Can a young woman overcome her past and reach her dreams? Find out in an inspirational movie based on the true story of Donaly Marquez.

Dateless for the Christmas ball, 39-year-old bachelor, King Charles of Baltania (Ingo Rademacher), tracks down his American college sweetheart, Allison (Tara Reid), only to discover she has never been married, yet has raised a 17-year-old daughter, Lily (Haley Pullos), who mathematically might be Charles’ biological princess.