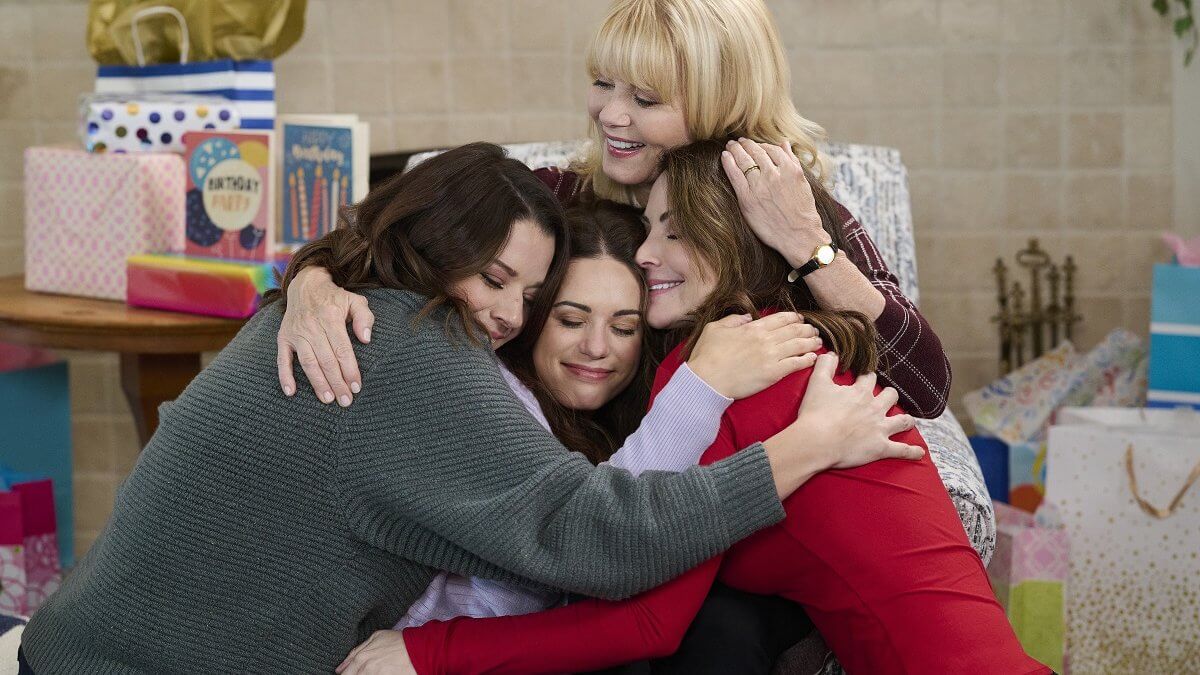 Sunday night on Hallmark Movies & Mysteries, director Ali Liebert helms North to Home, an ensemble family drama starring four of Hallmark’s leading ladies–Lyndsy Fonseca, Kimberly Sustad, Erica Durance, and Barbara Niven, as three daughter and their mom who are forced to face old trauma when they gather in Alaska for a birthday celebration.

Youngest daughter Posey (Fonseca) is the only one who’s stayed behind with her parents (Niven and Fred Keating), working at the family cafe and climbing Alaska’s peaks and working search and rescue in her free time. The former is a commitment and the latter is a passion that becomes even more tempting when her mom’s guest house tenant, travel writer, Luke (Tom Stevens) shares her interests.

Middle sister Beth (Sustad) is a suburban New York married mom of two girls and former marketing exec who tabled her career to stay home with her daughters. When her former boss, Corinna (Luvia Peterson) comes calling with a very tantalizing offer, it reawakens something she’d let go dormant and creates conflict with her husband, Jason (Matt Hamilton).

Eldest sister Hannah (Durance) has a successful NYC finance career and a happy marriage as one half of a DINK with her husband, Adam (Matthew James Dowden), and she’s preoccupied by the ill timing of the trip home and the rift with Beth, who she’s disappointed time and again by breaking commitments.

Mom Suzanne is facing a significant birthday that also coincides with the 25th anniversary of a tragedy that changed all their lives. As the birthday approaches, and all three daughters are back under one roof, they have to face the past and evaluate the individual personal and professional crossroads at which they’ve all landed.

It’s a warm, messy, complicated family story that explores the ties that bind, sometimes a little too tight, and the closure that can sometimes come from finally saying your piece, confronting old wounds, and finding forgiveness for yourself and others. Frequent Hallmarkie Liebert directs a script by S.W. Sessions adapted from Sarah Morgan’s novel The Christmas Sisters.

Outlander Preview: “By the Pricking of My Thumbs”