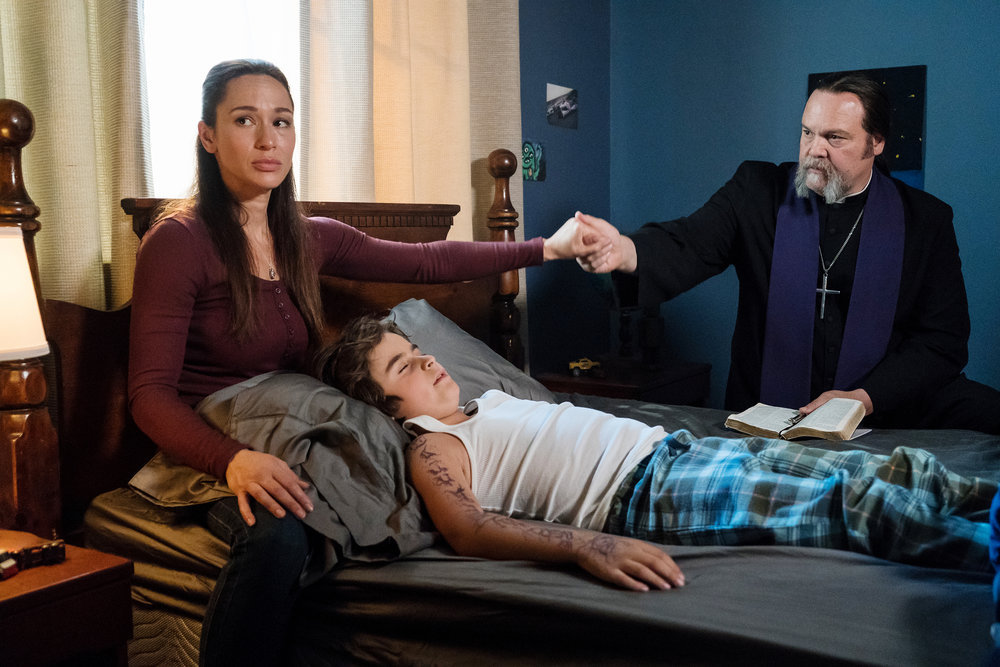 Ghost Wars amps up its seriousness tonight in the “The Exorcism of Marcus Moon,” which, as its title suggests, focuses on what happens when the ghosts take their war to the very young–in this instance, Marcus (Chance Hurstfield), the adolescent son of Sophia (Sharon Taylor), the town’s mortician.

Sophia turns to Father Dan (Vincent D’Onofrio), who’s experiencing a ghost-driven uptick in his weekly sermon attendance, for help when Marcus starts acting out and odd. Dan has already been nudged in her direction by Roman (Avan Jogia), who alerts him after he also sees something alarming in Marcus

After that tip off, Roman is occupied for the rest of the hour by Landis (Kandyse McClure), who asks him to help her figure out–scientifically speaking–what the hell happened with the earthquake and her own visions afterward.

The episode is a showcase for Taylor, who American audiences will see this winter on WGN America in the excellent Canadian import series, Bellevue. She runs the gauntlet here as a woman who was fairly pragmatic about the vagaries of good/evil/life/death until the ghosts arrived and now she’s rattled to her core by their assault on her child.

It was written by (Van Helsing‘s) Karen Lam and directed by one of my absolute favorite multi-hyphenates, Motive‘s Kristin Lehman, who does double-duty in the episode as Marilyn is drawn into the mystery at separate intervals by Sophia, Dan, andÂ her daughters.

It’s a taut, emotionally wrought hour that’s balanced out by Landis’ practical and analytical sessions with Roman, which are educational for both of them.

Ghost Wars airs at 10/9c Thursdays on Syfy. Here’s a sneak peek. In case you missed it last week, check out my exclusive interview with showrunner Simon Barry.

The spirits are growing more and more vicious.

Prepare to fight. #GhostWars is all-new THURSDAY at 10/9c on @SYFY. pic.twitter.com/7xrEpfgv40

A Girl in the River: Oscar-Winning Director Sharmeen Obaid-Chinoy Shines a Light on Honor Killings [Exclusive]