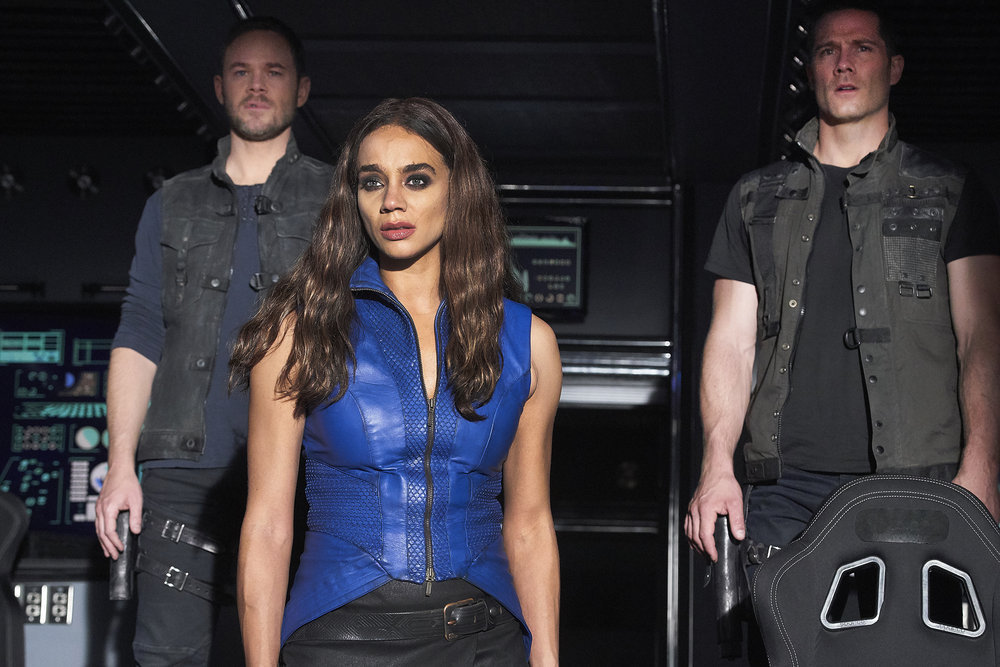 Hey there, Killjoys kids. How are you doing? We’re eight down and two away from the series finale. In tomorrow night’s episode, the next-to-last Killjoys ever, the wink-nudge misdirect is alive and well in an episode that also brings us reunions, gambles, pep rallies, confessions, and a mighty big baller move.

I’ve always loved that this show lets us in on part of a caper without tipping their hand to the whole thing until they’re good and ready, and then when we find out the truth alongside the cape-ee, we’re not even mad. There’s a fun, bendy, “if…then” multi-player doozy in “Terraformance Anxiety,” written by showrunner Adam Barken and directed by producing director Stefan Pleszczynski.

After some Gared-, Pree- and Turin-delivered intel, Team Awesome Force quickly realize they have to move up their timeline to rescue Westerley, which involves making some strange bedfellows. It will also involve some subterfuge, misdirection, and unwitting reverse double recon.

While TAF target the spidey factory where Dutch previously channeled Ripley, Pree and Turin hustle everyone in Old Town into the Royale to buy them some time while the environment outside grows more dangerous. With most of them mind wiped, Pree rediscovers the power of song. And once again, Turin’s heart grows two sizes.

The Supermax receives surprise guests and Dutch has to navigate her conflicting opinions about the redeemability of dear old dad. Khylen’s got his own questions after realizing he may have just heard what he wanted to hear in that galaxy quest discussion last week when he opted out of killing The Lady. Meanwhile, The Lady gets closer to what she wants and that leaves us with a wicked cliffhanger before next week’s finale. Set those DVRs to run long!

In the middle of all that, Johnny and Zeph hatch a new weapon, D’av is hilariously awkward about trying to find a moment to talk to Dutch, and Dutch nudges Johnny toward his post-RAC path. The team is also forced to take the most drastic and emotional of measures in an attempt to save their people. It’s a terrific episode that’ll have you ready (or not) for the finale.

Killjoys airs Fridays at 10 pm/9c on CTV Sci-Fi Channel (formerly Space Channel) and Syfy. All of our Killjoys coverage, including 18 Season 5 interviews so far and my mash letter to the show, is here. You can catch all four seasons and the first eight Season 5 episodes on demand on the CTV Sci-Fi Channel app and Syfy app and website. Here’s a sneak peek of “Terraformance Anxiety.” Come join the live Tweet and then check back after the East coast air for a new interview with Adam Barken!