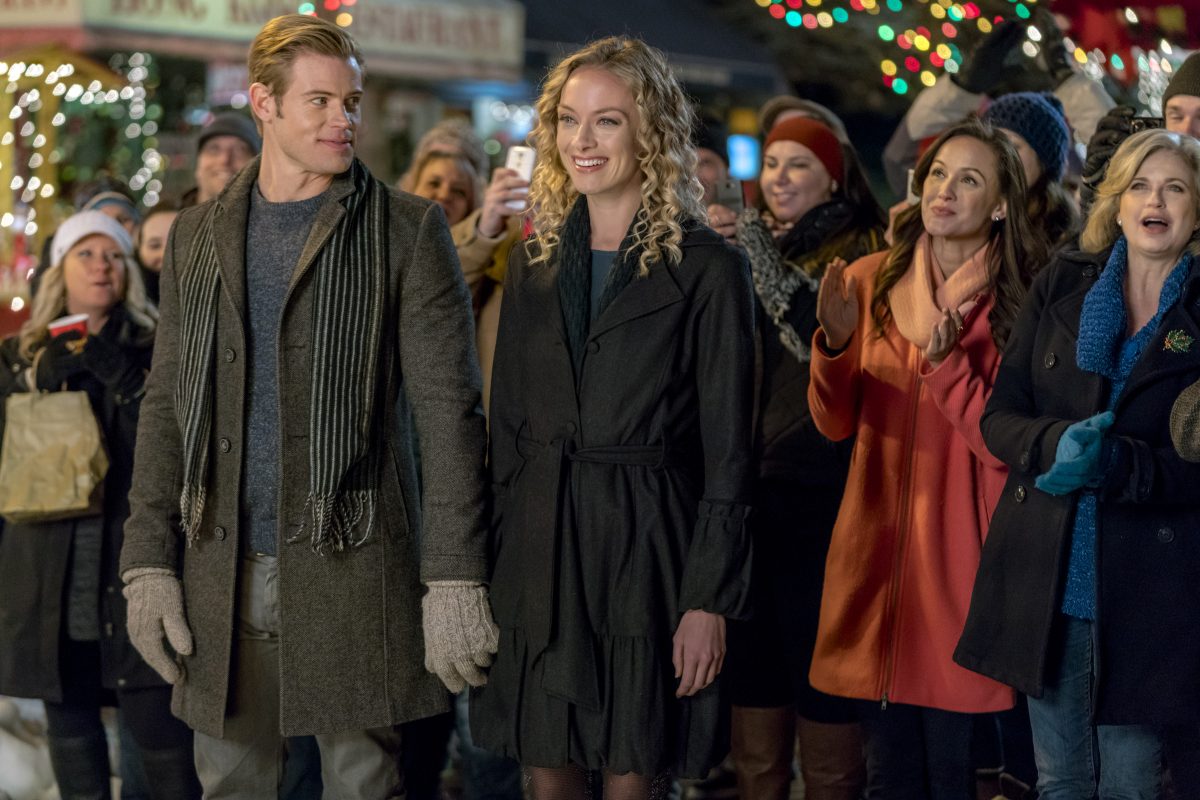 Hallmark Channel gets the jump on its 2017 holiday season with Marry Me at Christmas, starring Reign and Lost Girl‘s Rachel SkarstenÂ in her first film for the network (after the HHOF In My Dreams, which aired on ABC in 2014) and Sun Records’Â Trevor Donovan, who was last on Hallmark Channel a year ago in Love on a Limb.

In the new film, Skarsten (rocking a killer assortment of coats) plays Maddie, the owner of a bridal shop in the Northern California resort town of Fool’s Gold, whoÂ agrees to plan the wedding of a young couple, Ginger (Cedar Cove‘s Emily Tennant), who is working for the mayor,Â and Oliver (Blair PennerÂ of The Flash), a doctor whose upcoming residency on the East coast has forced them to fast-track their big day.

Although she’s initially reluctant to graduate her involvement from wedding dress provider to full-blown wedding planner, Maddie’sÂ BFF and business partner, IsabelÂ (Signed, Sealed, and Delivered‘s Crystal Lowe),Â conviences her to rethink it because they’re in serious financial danger of shuttering the shop at the end of the year.Â SheÂ agrees and then finds out that Ginger’s brother, Johnny (Donovan),Â is an action hero movie star who’s taking a break from his paparazzi-laden LA life to help with the wedding.

Maddie and Johnny are thrown together repeatedly to help with the preparations, and with a little maneuvering from Ginger, spend more time together than necessary. While Johnny warms to Maddie pretty quickly, she’s hyper-aware that his stayÂ in town has an expiration date.Â Her hesitation and theirÂ inability to wholly trustÂ each other complicate things, as does a last-minuteÂ tabloid scandal.

It’s a sweet movie that’s of the more wistful variety that I gravitate toward, and that’s no surprise given that it was adapted from Susan Mallery’s novel by Julie Sherman Wolfe, who wroteÂ Birthday Wish, which y’all know I love. Regular Hallmark family film and series director Terry IngramÂ directed.

I’m super glad that Canadian SkarstenÂ was cast as the lead and I enjoyed seeingÂ her change it up a bit as someone who’s independent but also vulnerable. When we last saw her on Reign, she was independent and lethal. Donovan is good as the older brother investedÂ in giving his sister the best wedding day possible, especially sinceÂ they’re each other’s only family. Perhaps finding love at the same time is a bonus.

Marry Me at Christmas premieres Saturday at 8/7c on Hallmark Channel. Here are a couple of sneak peeks and a snippet from a reading that Mallery did where she talked about the movie.