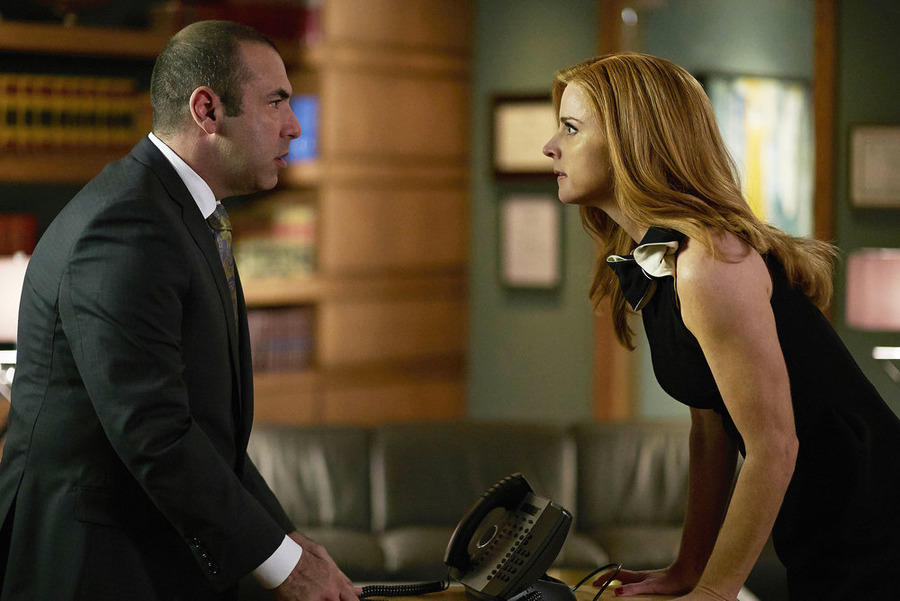 Harvey really drove home the “Hitting” part of last week’s episode, which happened to be called “Hitting Home.” At the end of the hour, he punched his fellow name partner right in the kisser after Louis hit a little too close to home with his verbal attack.

The two titans clashed in a spectacular way. Harvey finally decided to come clean with Louis and tell him about the fact that he hooked up with Esther. Of course, Harvey was too late. Donna strongly advised him to tell Louis earlier in the episode. Why didn’t he listen to her? He’s so stubborn. He — of course — chose to go with avoidance and believed Louis would never find out. Not a wise move.

On top of that, he must have been feeling guilty for his actions — the not telling Louis part, not the hooking up with Esther part, that is. Because when Louis’ sister wanted to spend more time with Harvey, he pretty much eviscerated any chance of that ever happening and ended up hurting her big time. Remember earlier when he was sweet but dick-ish with Esther? Take out the sweet part and that’s how things ended with these two.

As for Louis, he was no better. It’s understandable he would want to protect Esther. His verbal attack on Harvey was over the top hardcore and a little too on the nose considering what Harvey had recently been discussing with his therapist. Louis unknowingly triggered some of Harvey’s major issues, which is rich, considering it’s because of Louis’ own childhood issues that he made Harvey promise to stay away from his sister. Harvey and Esther are adults, Louis.

Louis: I found out that you’re nothing but a lying, cheatingâ€¦

Harvey: I didn’t cheat with Esther. It was two grown people making a god damn decision for themselves.

Louis: Well that decision ended with her walking out of here near tears because she didn’t have all the facts. Like the fact that you’re a serial womanizerâ€¦.who can’t stand when anyone else has anythingâ€¦

Harvey: Shut the hell up!

Louis: So he takes whatever woman’s in sight…

Louis: Because he’s so messed up from whatever god damn thing that happened to him in his pathetic childhood

Harvey: Shut the hell up!

This is when Harvey punches Louis. And then Louis goes after him to which Harvey throws him into the glass table.

Both of these guys deal with things in an attack first mode so this escalation was no surprise. And now we’re in a position where it’s as bad as it gets. The verbal attack got physical. And now I can only imagine how Louis will retaliate.

Don’t think Louis will remember that Harvey went to bat for him with his sister. He didn’t take her case because he felt she should be turning to Louis for support. And Louis’ Donna fixation is well known. He projected it all over this confrontation. After all, Harvey and Donna recently shared a really cute friendship dinner together. Louis is deathly scared of losing her.

Harvey has some serious abandonment and trust issues. Louis’ insecurities are legendary. Neither man is blameless in this messy situation. Jessica had to come in and tell Harvey to go home. That leads us to tonight’s episodeâ€¦

Yeah, I’m woman enough to admit that I’m a little scared to watch the fallout from the Harvey/Louis smackdown.

Meanwhile, Donna (Sarah Rafferty) counsels both men on how to rectify their issues.

And Mike (Patrick J. Adams) must find a way to turn down his recently announced promotion without raising suspicion â€“ while he and Rachel (Meghan Markle) combat an opposing attorney who holds the key to uncovering his secret. Guest stars: Troian Bellisario, Christina Cole and John Pyper-Ferguson

In season four, Mike Ross met Claire in a flashback to his days as a bike messenger. A law student at the time, Claire returns to present-day Pearson Specter Litt as opposing counsel on one of Mikeâ€™s cases

-Who will be making the mea culpa?

-There’s another Daniel Hardman sighting. I knew that last episode’s appearance wasn’t going to be the last. Does this mean Jack Soloff and Hardman continue to work against Pearson Specter Litt? Well, they’re sure to be happy about what transpired between Harvey and Louis.

-Hmm…Pretty Little Liars‘ star (and Patrick J. Adams’s significant other) Troian Bellisario returns. What does this all have to do with his secret? How does she figure into things this time around? She knows a lot about Mike. She can do some damage if she wants to.

-On the other hand, Troian and Patrick shared a lot of chemistry in the previous episode. What’s going to happen when Rachel meets Claire?

-Mike may have to take that potential promotion because if he turns it down, people will wonder why. People like Jack Soloff and Daniel Hardman. Anytime Hardman’s around everyone needs to watch out.

-Will Donna be able to work her magic with Harvey and Louis? And when will we meet the guy she’s dating? We first heard about Mitchell last week.

And how about Dr. Agard? How will she counsel Harvey on what he did to Louis?

Yeah, tonight promises to be another intense episode.Â Suits airs tonight at 9/8c on USA Network.

EXCLUSIVE Under the Dome Preview Clip: "Plan B"