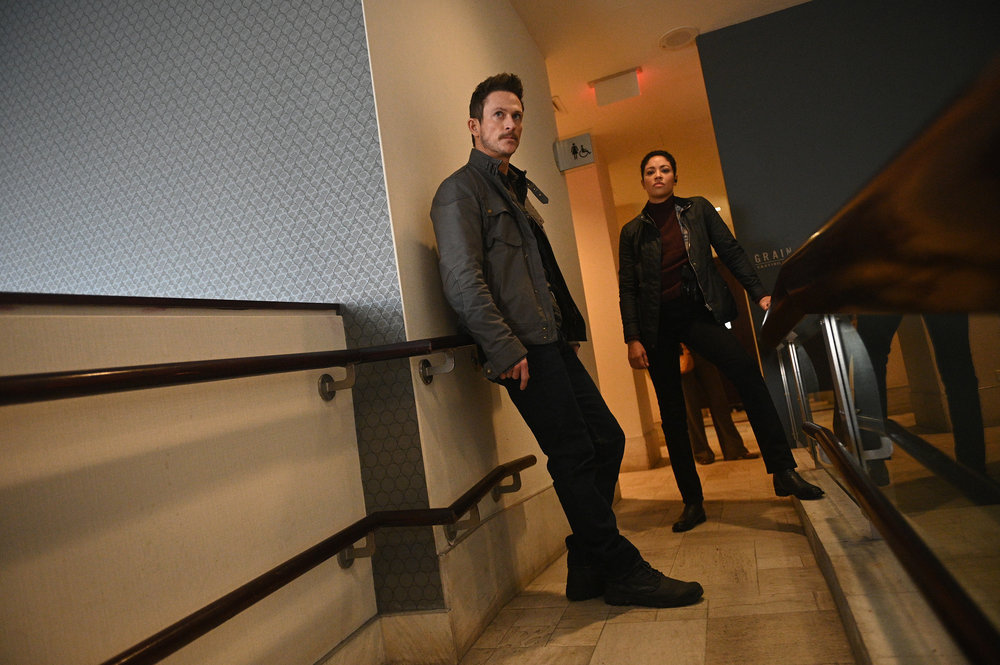 There’s a very specific look, feel, and general vibe that happens with science fiction and genre series set in the present day that film in Vancouver, going back to OG The X-Files, Millennium, and the 90s version of The Outer Limits up through Fringe, Supernatural, and even last fall’s NeXt. Monday night, NBC rolls out Debris, which checks all those same boxes. That’s a good thing.

The new sci-fi show comes from Fringe executive producer J.H. Wyman. It’s an odd fit for the network, but I’m hoping the mainstream viewers at NBC will check it out–over nine million people have watched the trailer since it went up last week, so that bodes well.

Jonathan Tucker, who was so good in the first season of Showtime’s City on a Hill and the final season of Justified (among many other things), co-headlines with Riann Steele (The Magicians). The series is a procedural of sorts about a CIA agent, Bryan Beneventi (Tucker) and MI:6 agent, Finola Jones (Steele), who are paired up on an international task force to track and retrieve the titular debris from an alien wreckage. Out in the wild, the debris has the potential to wreak havoc, and it’s created a criminal black market for people (like Taboo‘s Scroobius Pip) who will pay extraordinary sums of money to tap into its powers.

The agents’ base is an always-on-the-move airplane/office, which puts the duo in close quarters more often than not. While the debris has been on Earth for six months, we’re not told how long they’ve been partnered, but we can assume based on the conversations in the pilot that it’s a fairly nascent arrangement, so much so that they still report in to their superiors about what the other is doing.

Out of the gate, there’s a more emotional component to their investigation, which seems to surprise Bryan. Yes, the debris adheres to the sci-fi rule of making weird, scary things happen, but it’s also preying on very human emotions. Love, guilt, and grief are its currency in the pilot.

Bryan is fairly by-the-book as an investigator, and he’s rattled when an interviewee unearths old wounds. He learns something about his partner when Finola comes through with the empathetic yet pragmatic response that’s needed to work the case. She has her own history, too. Her father was a a world-renowned expert on extraterrestrials. His death followed her mom’s in short order so now she’s on her own, working to prove that she’s more than her namesake.

The case itself also gets personal when Finola is randomly targeted and Bryan moves hell and earth to extract her from danger. And then that strengthening bond gets another test when his boss (Norbert Leo Butz) shares intel and makes an unorthodox request.

The series is Wyman’s first since the back to back of Fringe and Almost Human, and here he produces alongside Jeff Vlaming (the OG XF as well as Reaper, Teen Wolf, The 100, and Fringe) and Samatha Corbin-Miller (Absentia and SVU). The other bonus from the Vancouver location is the fun HITG rotation. In the pilot, we get Wynonna Earp‘s Michael Eklund and frequent Hallmarkie Julia Benson guest starring.

I really liked the first episode, and it’s an interesting spin to pick up with the partnership already established and skip over the meet-cute and initial discovery of the artifacts. When I got about 15 minutes into it, I wondered if I had the right screener because there was no introductory exposition, which was refreshing. Tucker and Steele are very good together, and as Bryan and Finola, they’re creating a slightly uneasy but “we have to trust each other anyway” partnership that I want to watch develop. I’m not sure how many episodes we’re getting, but I’m hoping it’s ten or 13.

Debris airs Monday at 10 pm/9c on NBC and streams free Tuesdays on Peacock. Here’s a sneak peek and the first ten minutes of the premiere.