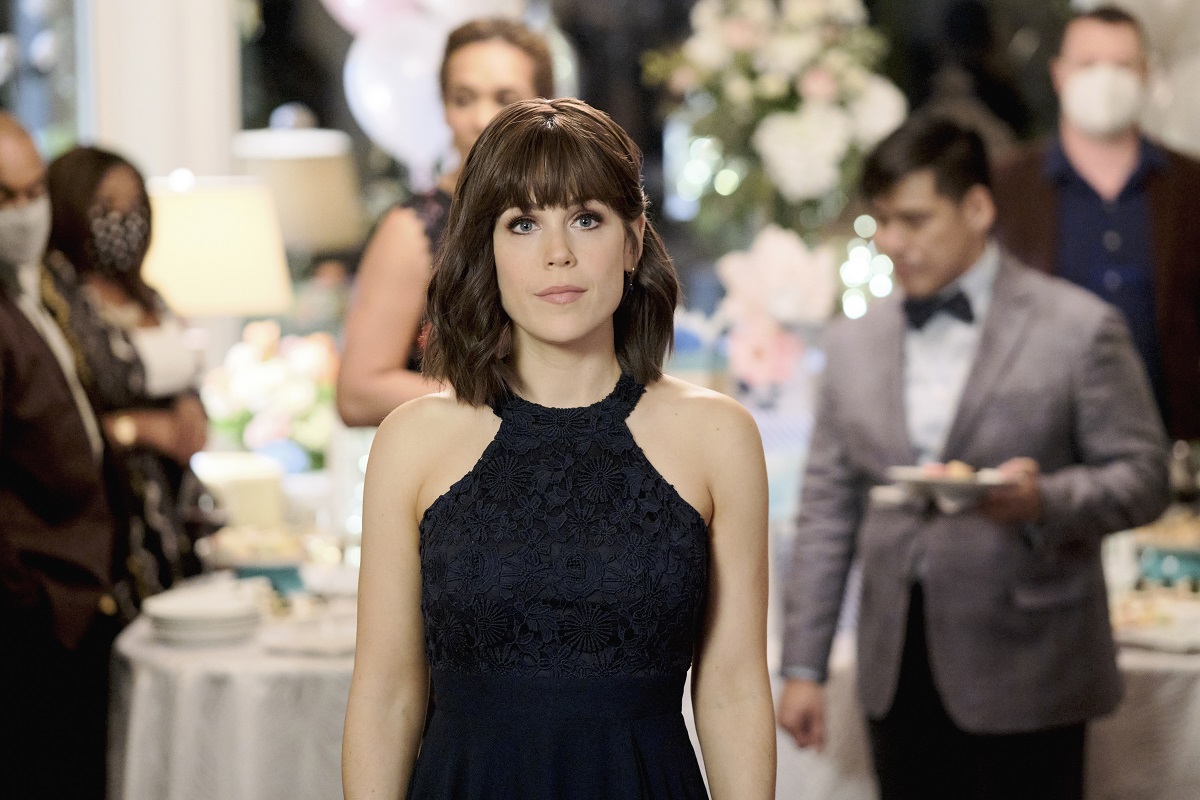 On the heels of the Season 8 premiere of When Calls the Heart, Erin Krakow is on Hallmark Channel both nights this weekend. Saturday, she stars in the premiere of It Was Always You, directed by Michael Robison and adapted by Kathy Kloves from Marian Thurm’s short story, “Today Is Not Your Day,” from a collection by the same name.

In the film, Krakow is Elizabeth, a dentist who’s happily engaged to George (Giles Panton), her dental practice partner and a childhood friend with whom she reconnected in dental school. When they make the trip home to his family’s ocean-side (we’re just going to call it) estate to commence wedding planning and celebrate his mom’s birthday, things go a little sideways.

George’s younger brother, David (Tyler Hynes) arrives for the party, and there’s some leftover adolescent friction (for reasons that aren’t ever completely clear) that make Elizabeth and David oil and water whenever they’re together. After George goes back into Seattle for a patient emergency, a storm takes out the only bridge back.

Suddenly, Elizabeth is left to plan her wedding on her own. Or, she would be, if David didn’t keep inserting himself, initially a most unwelcome interloper, and then later, not so much. Which makes wedding planning a little awkward.

When I chatted with Krakow about WCTH (that interview is here), we also talked about the film. “It is one of my favorite, favorite Hallmark Channel scripts that I’ve read and participated in. Kathy Kloves is a genius. And I’m just so excited for people to get to see it,” she says.

Krakow appreciated that the film isn’t just a romantic love story, but also story about loving the family you find and loving yourself. As a girl, Elizabeth found solace with George and David’s family after her parents’ split. “The connection that Elizabeth has with this family has just always been so special to her. And I think, growing up, she looked to them as what she wanted to recreate in her adult life,” she explains.

“I think because she and George were so similar, it just seems like the most natural fit. And that’s kind of the way she’s lived her life. She has this checklist and she follows it and she does the things that seem sensible. I think when she has this opportunity to spend all this one-on-one time with David, and has a little space away from George, she realizes, through David’s gentle prodding and challenging, that she really isn’t the person that she’s been trying so hard to be all these years. There are deeper layers to her.”

Those shifting feelings then cascade across the extended family of George and David’s sister, Louise (Elysia Rotaru), Mom Diana (Frances Flanagan), and Grandma, Vivien (Paula Shaw), who are all still very much present. (Look for Louise to have her own sweet arc with local postman, Eugene, played by Hallmark regular Nelson Wong. Note to Hallmark: I’d watch a spinoff film just about them.)

It Was Always You premieres Saturday at 9 pm/8c on Hallmark Channel in the US and W Network in Canada. Here’s a sneak peek.