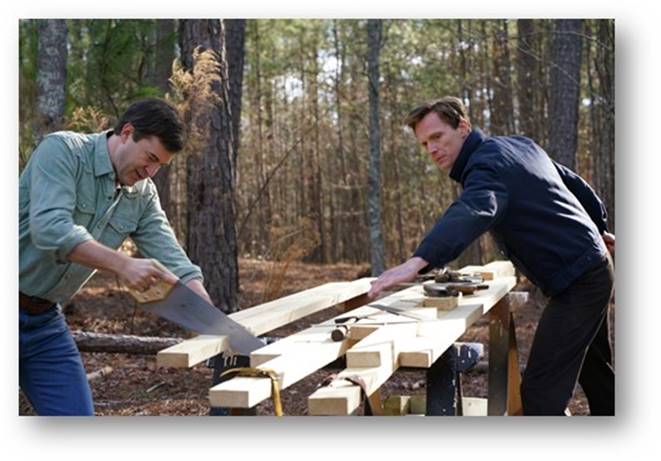 Episodes 5 and 6 are my favorite of the series — and every episode has been so good. This week’s “Abri” is Fitz-centric and next week’s episode is Ted-centric.

In “Abri,” it’s 1996 and David Kaczynski isn’t sure what to do. His wife, Linda, has read the Manifesto and she’s convinced the ideas and writing are a match to Ted. When David finally agrees to submit a sample of Ted’s writing to the FBI for analysis, it’s only under the condition of strict anonymity.

At the same time, Fitz is back home in Pennsylvania and it’s probably a bit of an understatement to say he’s going stir crazy. Even though he’s with Ellie and his sons, Fitz is still obsessed with the Unabom case. Despite his severely lacking interpersonal skills, Fitz has managed to maintain contact with Tabby and through her, he gets some access to the case. When he realizes there are striking similarities to the sample David submitted and the Manifesto, Fitz knows he has to track David down — even though it’s against protocol and he’s no longer on the case:

Will Fitz manage to convince Ackerman, Cole and Genelli that Ted Kaczynski is the Unabomber? And what are the consequences of violating orders? When I talked to Director/Showrunner/EP Greg Yaitanes about the series last week, I also asked specifically about episodes 5 and 6 and presenting these characters, warts and all:

Greg: “I think that was a bit of a shock to real Jim. Itâ€™s tough for anybody to have it out there. The Unabomb case really did have a lot of collateral damage to it. We wanted to portray what was happening honestly and that was something we had conversations with Jim [about]. This was not going to be Elliott Ness riding high in The Untouchables here and be spotless.

It is tearing [Fitz] apart and heâ€™s conflicted because he believes in whatâ€™s being said. Meanwhile, the other side of him canâ€™t allow it to happen so you feel that push and pull. Everybody reacts to that kind of friction differently, so when he gets this case it was very isolating and it alienate a lot of the people around him, both at work and in his personal life.”

Nothing is as it Seems in Preacher "Dirty Little Secret"