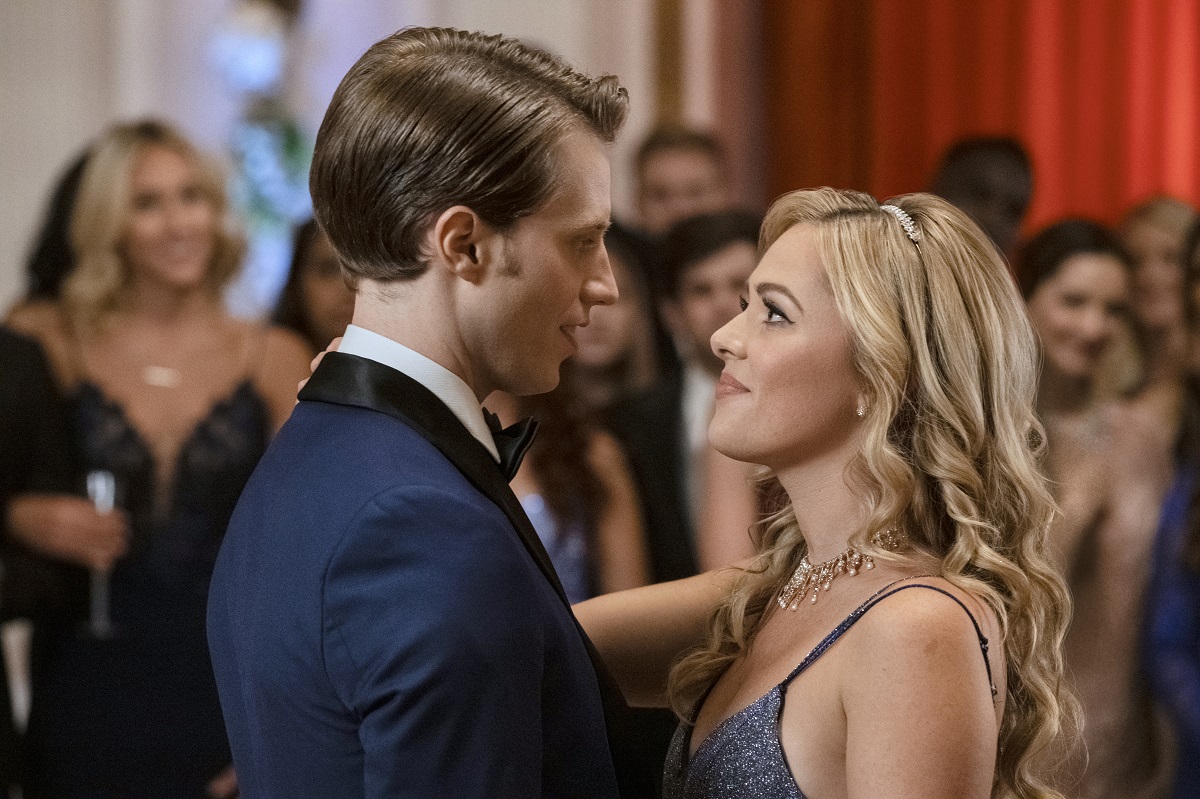 Hallmark Channel kicks off its 2021 Spring Fling with a little royal flair Saturday night with the premiere of Fit for a Prince, starring Natalie Hall (You’re Bacon Me Crazy) and Jonathan Keltz, in his second princely outing for the network, following 2018’s Once Upon a Prince.

Hall plays Cindy, the wizard designer behind the curtain of dress-designer-to-the-stars, Rebecca Raslyn (Paris Jefferson). Rebecca’s long since ceded daily design and shop operations to Cindy, but to the outside eye, Cindy’s her head seamstress. Cindy’s generally OK with that arrangement because Rebecca’s dangled the carrot of helping her launch her own company, but she’s less OK with it when a plum assignment lands in their lap and then keeps growing.

Initially commissioned to create a few dresses for the Hamiltons, a local wealthy family who’s hosting a charity event for the visiting Prince Ronan (Keltz), the order starts multiplying. That puts Cindy in a bind to give her seamstresses and right-hand man, Reggie (Ish Morris from Killjoys) a break. Her meet-cute with Ronan takes a turn when he realizes she’s the one on the hook for all the work.

He’s also a bit taken with her, and overreaches past Rebecca and Cindy’s comfort levels to invite Cindy into the rarefied world of his hosts. Cindy’s flattered and happy to push those boundaries a bit until she’s mean girled by Brooke Hamilton (Rebecca LaMarche) and Julia (The 100‘s Melinda Michael), Ronan’s prearranged date for the party.

Thankfully, Ronan isn’t wholly unaware of those manipulations and pushes some boundaries of his own to go against proper procedures and decorum to make her feel more welcome, and the Hamilton matriarch, Virginia (Mary Long, who co-starred with Keltz in Love at Look Lodge), is also an ally. And then he steps up in a big way to help her.

It’s a really cute way to kick off a month of premieres, and it’s a fun, frothy story where the drama’s more courtesy of the girls who are jealous than any conflict trying to proceed with Ronan, and that’s a welcome switch up. Marita Grabiak (The Nature of Love and The Order) directs a script by T. Booker James (A Welcome Home Christmas).

Fit for a Prince premieres Saturday at 9 pm/8c on Hallmark Channel. Here are a couple of sneak peeks.