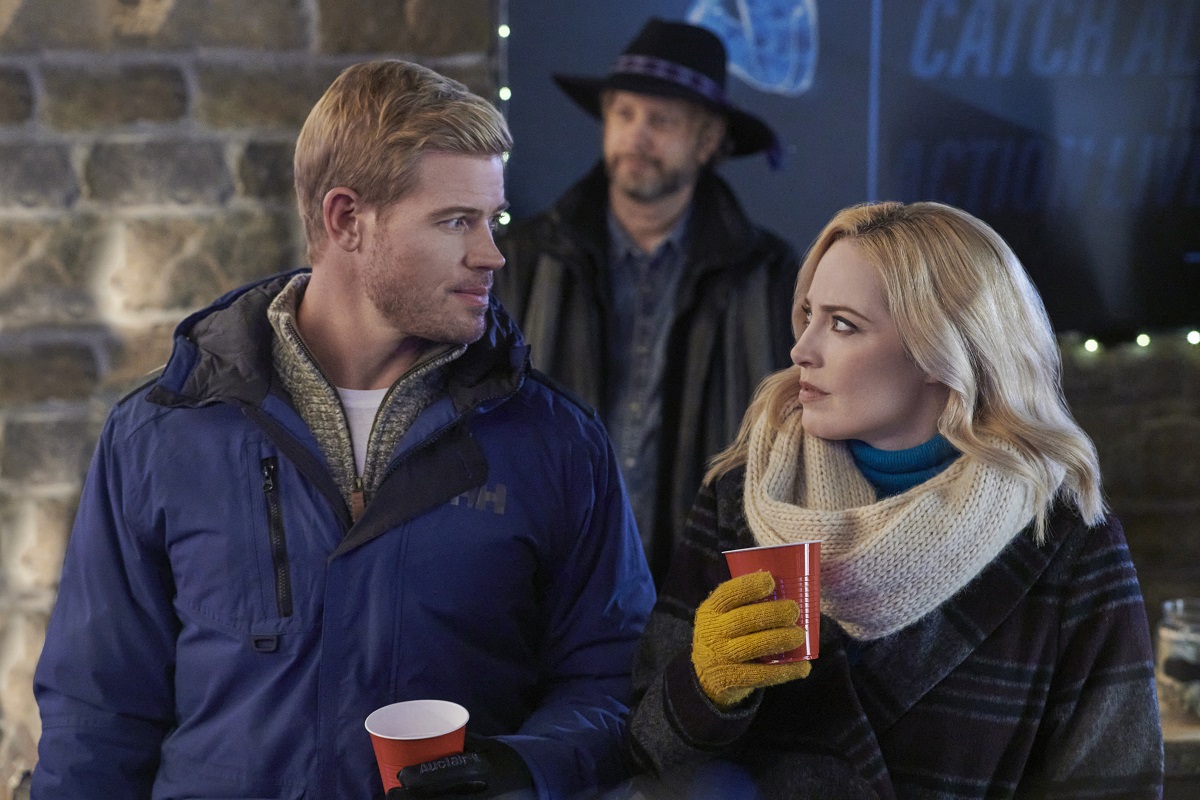 I do love when my fandoms collide, and Saturday night we have the fab swell groovy Charlotte Sullivan of Mary Kills People and Rookie Blue [and insert iconic role here] in her Hallmark Channel debut, starring opposite Trevor Donovan in Two for the Win.

In the film based on Sarah Morgan’s novel, Sleigh Bells in the Snow, and directed by Jerry Ciccoritti, and adapted by Andrea Canning and Nina Weinman from Canning’s story, Donovan is Justin, a world-renowned champion skier who may just be on downhill slide after an injury from which he hasn’t quite rebounded.

When he returns home for a test run ski event to dip a toe back into competing, he’s coach-less, until his manager, Anna (Amanda Martinez) pairs him with his estranged childhood BFF and one-time coach, Kayla (Sullivan), who he left behind years earlier without looking back.

Kayla’s gone on to run her family’s ski school with her sister since the death of their parents, but when Justin returns home, she can’t deny those old wounds still sting. And he can’t deny that she’s the only one who can get him out of his head and back on the mountain.

Once they’re teamed back up to train, they quickly find their old vibe, and before long, Justin realizes that he left behind some pretty significant friendships–Kayla, her sister, Jenny (Siobhan Murphy), and their friend, Wyatt (Farid Yazdani), and his mom, Gretchen (Seana McKenna), and that perhaps he’d misinterpreted the zeal of his father, Tom (John Ralston), who was also a champion skier.

Of course, because it’s Hallmark, there’s a wrinkle, and the nice twist here is that it arises with an opportunity for Kayla, not Justin–and that they actually have their personal stuff sorted before that throws them a curve. It’s a fun, different, outing, and such a thrill to have Sullivan come play in what I hope is the first of many Hallmark projects.

She has a terrific knack for consistently playing characters who are having none of your shenanigans. It’s endeared her to a very staunch fanbase, and it works to great effect here as Kayla has no filter. She and Donovan have a good time together as Kayla gives Justin the straight truth about where he is–and isn’t– in his recovery.

And she pulls no punches about telling him how it felt when he ghosted her. When their friendship is back on track and becoming something unexpected, she just radiates joy, along with that pitch-perfect, sly, wink-nod twinkle. Also, there’s line dancing. Who knew? Love that she did this.

Two for the Win premieres Saturday at 9 pm/8c on Hallmark Channel. Here’s a sneak peek.