The end is nigh. John has been tried both in the court of public opinion and before the board by religious zealot Increase MatherÂ and he has beenÂ found guilty. The four girls who were promised not to be burned at the stake for condemning John as a witch are instead hung. Having failed to deliver on her promise to keep Mercy’sÂ friends safe, Mary is now the target of her former protegÃ©’s vengeance. Knowing nothing of Mary’s true nature, Isaac has nevertheless asked her to work “her magic” and do something to prevent John’s imminent death. But the Grand Rite is almost complete. Only Mary’s death will prevent the malum from unleashingÂ its plague.

John Alden is in a very bad place. In jail and sentencedÂ to die, he’s lost all hope. According to series star Shane West, John has “lost the love of his life, he’s lost the trust of his town,” and the “new friend he’s made in Cotton Mather. Everything is done.” He’s exhausted and tired of fighting. Before now we would have seen John “trying to break out,” but if “he has to hang,” West says he’s resigned to his fate.

You want to know who dies? I’m not telling, but with a show like this, EP and showrunner Brannon Braga teases, “you just never know who’s gonna make it.” With any supernatural or genre show, anything is possible. One character who surprised Braga early in the season was Elise Eberle‘s Mercy Lewis. According to Braga, she was only supposed to have a peripheral role, be “a supernatural Lindsay Lohan from hell. A local celebrity.” But her performance convinced Braga that they “had to do more with her.” It’s important to have a plan for the series, but Braga says it’s “seventy percent planned, thirty percent inspiration.” West adds that “you have to see what” develops naturally. West explains that John and Cotton’s relationship “grew over time” because of “Â that connection or that rapport that Seth and I had together.” Braga adds “that chemistry definitely informed the writing.”

TheÂ finale isÂ a true cliffhanger in every sense of the word. This episode “is a culmination of all the story strands that have been building throughout the season,” teases Braga. West agrees that “it’s a great way to end a season. If you’re a fan of the show in general, you’re going to be excited to see what happens to all these characters in the second season.” Braga adds, “there are a couple of shocking twists. People will be surprised” by how some of these storylines get resolved or continue to evolve. Braga adds, “it’s safe to say that John’s life hangs in the balance.”

“All Fall Down” synopsis, from WGN America:

All Fall Down wraps the psychologicalÂ thriller’s darkly provocativeÂ seasonÂ andÂ sets the stage for what is to come.Â  Increase Mather reveals his true plan about John Alden, Mary Sibley reveals her grand plan to Increase,Â Alden findsÂ out theÂ truth about MaryÂ and Mary findsÂ out the truth about her coven. Meanwhile, the battle over Salem continues as the Grand Rite and Salemâ€™s fate is revealed.Â

All photos courtesy of WGN America. 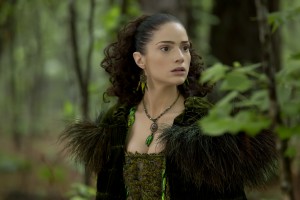 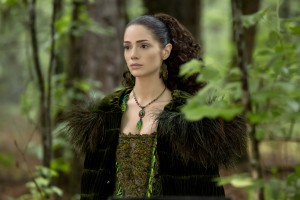 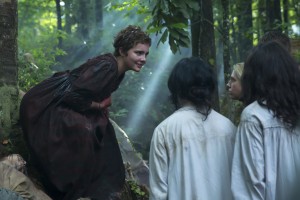 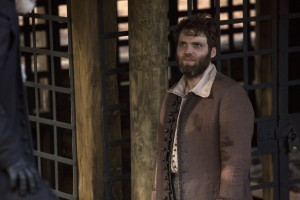 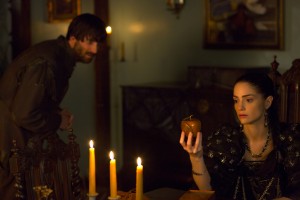 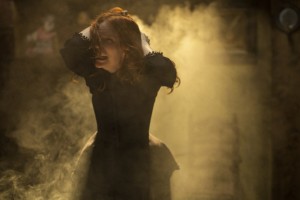