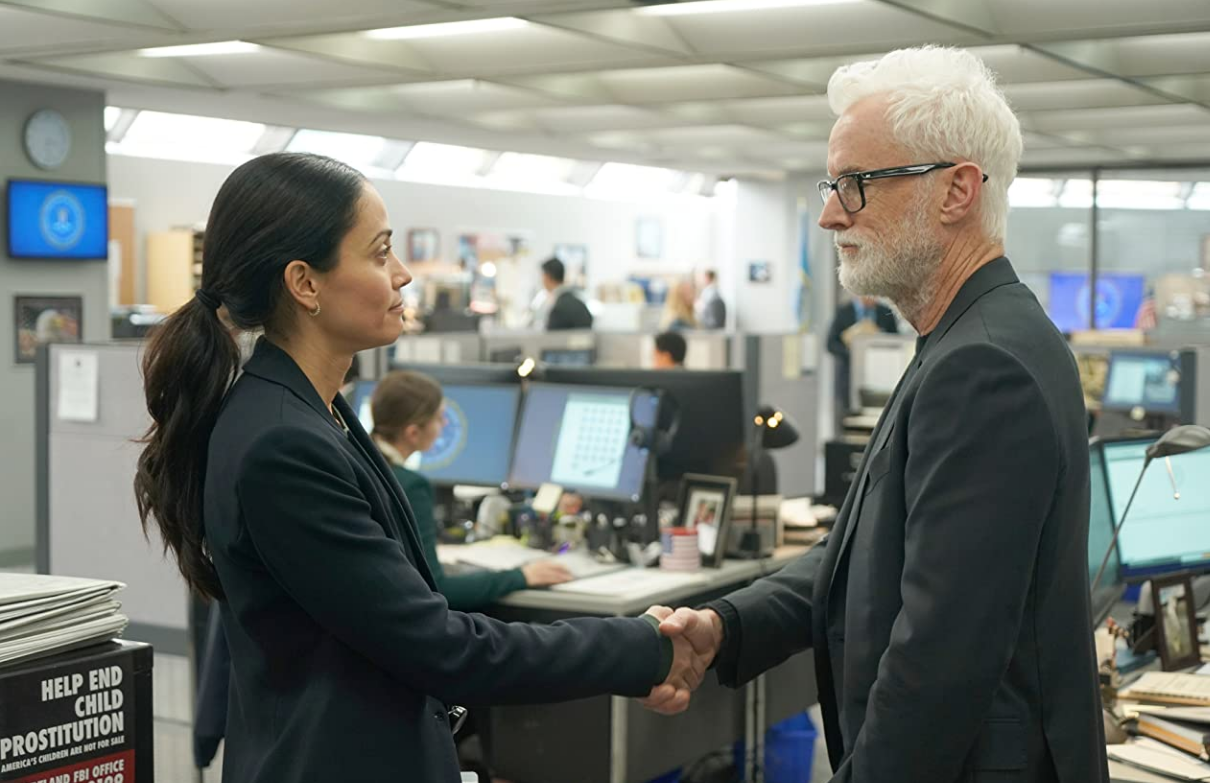 Not to lead y’all astray, but full disclosure, NeXt has already been cancelled by the network I not-so-affectionately refer to as FUX. That disclaimer out of the way, I stumbled onto the third episode of this X-Files-esque series last week and then found out it was already donezo, but by then, I was intrigued enough to go back and stream the first two episodes.

The hourlong drama, created by 24‘s Manny Coto, premiered in early October, aired two episodes, and then was off the air during and after the World Series before returning last week. It follows the unlikely team up of Shea Salazar (Fernanda Andrade) an FBI cyber-crime lead investigator and Paul LeBlanc (John Slattery), a Silicon Valley billionaire, following the death of the former’s dear friend (John Billingsley) in a car accident triggered by an autonomous car suddenly accelerating and t-boning him at an intersection. As it happens, he’d grown manic and paranoid about the tech around him. It’s not paranoia if you’re right, and he had good reason to be concerned.

Shea’s breadcrumbs lead her to LeBlanc, who was ousted from his company, Zava. Once she tells her tale, he suspects that his supposedly-terminated AI project may have had a hand in the accident. We soon learn that LeBlanc has his own paranoia and delusions, which are compounded when he learns his invention jumped a firewall and is out in the wild.

As the duo begrudgingly lean on each other to further the investigation and chase down an invisible target that has eyes everywhere and can often see them coming, the increasingly creepy blowback reverberates through the FBI, Zava, and their families. I really, really liked the first three episodes, and the XF-ish vibe is helped by the fact that it filmed in Vancouver. I do love when a series effectively taps the city’s energy–it has a storied history with sci-fi TV.

The first episode I watched last week immediately made me think of that series’ first-season episode, “Ghost in the Machine.” I’m also generally a fan of these kinds of stories, from cutting my adolescent teeth on the OG Wargames through to The Net and The Matrix, various episodes of The Outer Limits, and the more recent Blackhat and Ex Machina, and last season’s one-and-done, Emergence.

It’s fun to see Slattery in this role–a modern day, unhinged version of his Howard Stark, if you will. Andrade is new to me, and she and Slattery are great as newfound acquaintances who irritate the hell of out of each other but are still tethered together by the greater goal. Evan Whitten is terrific as Shea’s young son, Ethan, who gets more than he bargained for from the family’s home assistant/speaker.

NeXt airs Tuesdays at 9 pm/8c on FOX. The first three episodes are now streaming online on FOX and Hulu and are available on demand. At press time, the seven remaining episodes are still slated to air every Tuesday through next month. Here are a few sneak peeks.

[Updated: 12/22/20: I’ve watched the whole season, and it wraps up in a very satisfying way while leaving the door propped should they find another home. Definitely recommend this if you’re looking for a good binge in the style of old-school X-Files. The whole season will be available for streaming on FOX’s website on 12/23/20]

Photos and Videos Courtesy of FOX