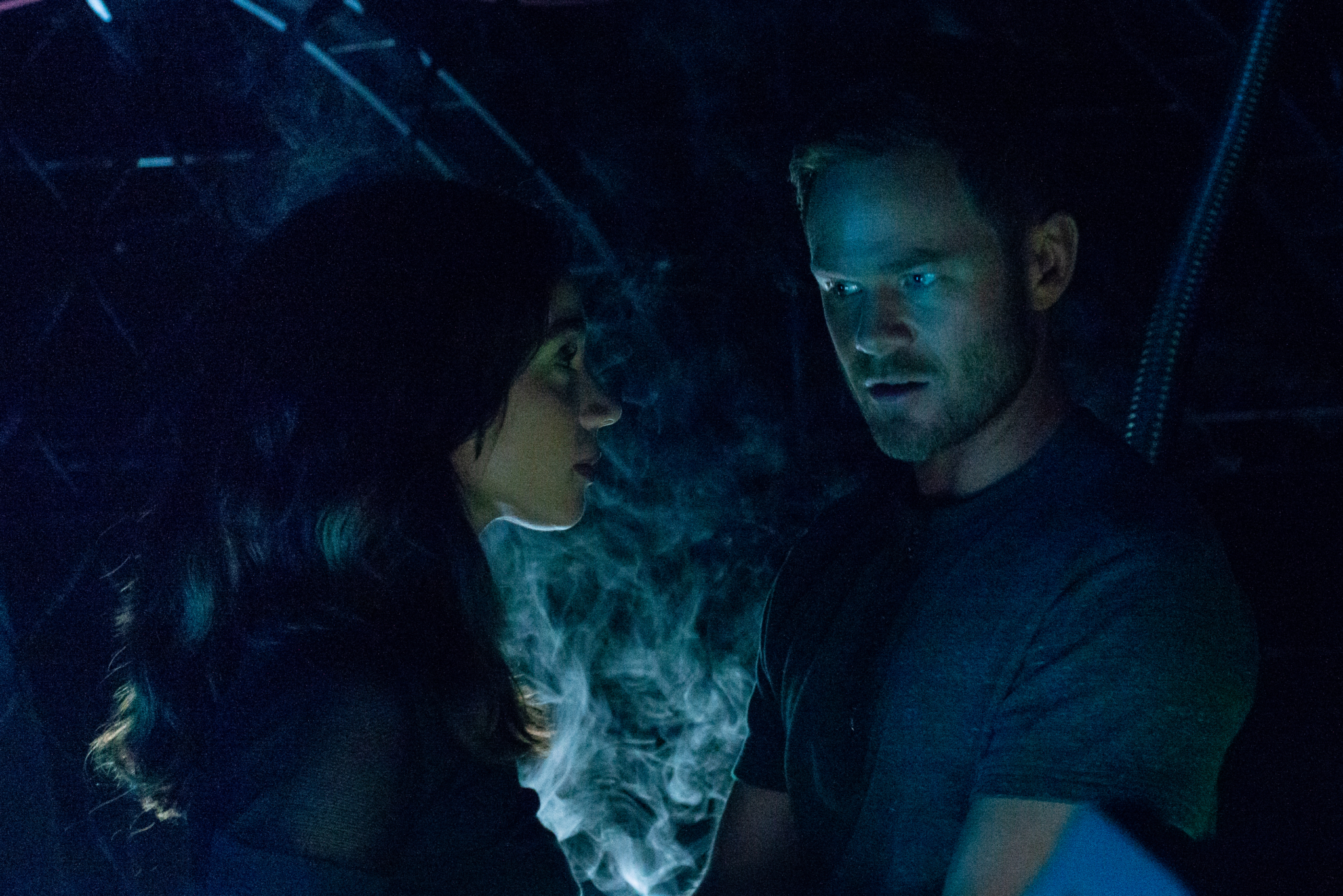 I pretty much want to just say, “WATCH THIS EPISODE LIVE,” and leave it at that, but that would be a copout. Instead, let me tell you how and why it’s full of awesome.

As we saw in the closing moments of “Bring on the Rain,” Team Awesome Force was surrounded by guards and it didn’t look good for a getaway. Cut to the opening moments of “Three Killjoys and a Lady,” and we find them locked up and at the Lady’s mercy aboard her ship—Johnny and Dutch tortured and D’av not so much. That last part creates some dissension later. The Lady also finally tips her hand about a significant weakness, and Khlyen continues to play both ends against the middle.

Pretty soon, their luck changes and they’re back on Lucy. The fact that they’re not immediately tailed gives Dutch (rocking a spiffy shorter haircut) pause, but it doesn’t last long when she has other things to be concerned about—a sneaking suspicion that perhaps she, D’av, and Johnny are not who they seem to be and the Lady might be riding shotgun.

And from there we spend the episode trying to find out who’s who as they each try to prove it. Sidebar: Per the trailer, there’s a little implied nudity but don’t get too excited. We are, however three for three on dick jokes.

It’s a perfect setup for a bottle episode and writers Vivian Lin (in her first script credit) and Derek Robertson (in his second Killjoys episode after “It Takes a Pillage“) and director Paolo Barzman (who directs his 5th episode) do a terrific job of casting doubt on the characters onscreen and for the audience as everyone is just slightly “off.” And Lucy tries to be the voice of reason in the mix as the trio act out, test each other, and speak truths that will be hard to walk back.

Without giving anything away, I’ll just say the setup yields hugely emotional moments for the team, including Lucy, who we see in the holoflesh again when Tamsen McDonough appears. It’ll be an episode that’ll take them all some time to recover from, compounding their mindwipe PTSD.

Who they were to each other inside the memory matrix was a brief foray into a faux, sometimes-idyllic life. That’s not an easy thing to let go when the memories linger and the feelings were real. Aaron Ashmore continues to astound, completely inhabiting all the facets of Johnny’s evolution, pain, heartache, and triumphs since Season 1. There’s a reason he’s Johnny Favorite for Dutch, and for us at home.

Killjoys airs Fridays at 10 pm/9c on Space Channel and Syfy. All of our Killjoys coverage is here. You can catch all four seasons and the first two Season 5 episodes on demand on the Space Go app and Syfy app and website. Check back Friday after the East coat airing for my exclusive interview with Vivian Lin and Derek Roberston. Here is a sneak peek of Friday’s episode.