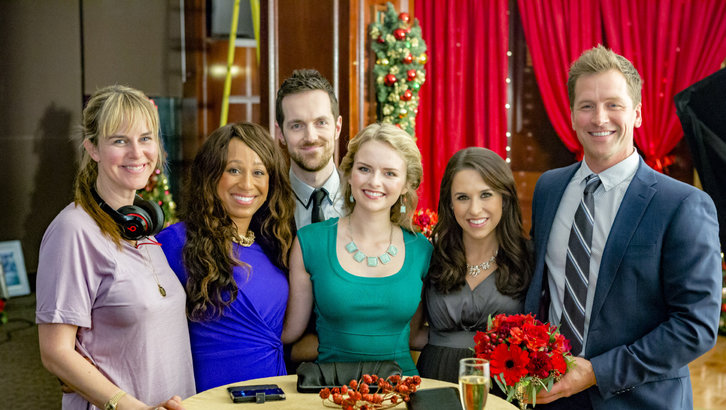 Our next 12 Days of Hallmark Holiday Favorites is a bit of a no-brainer. Lacey Chabert has appeared in seven Christmas movies since 2012, not to mention her library of non-holiday films. We’ll start with the 2017 entry and dial back.

The Sweetest Christmas cast Chabert opposite Lea Coco in the story of a pastry chef who rekindles with an old boyfriend when she enters a competition and turns to him for an assist when she needs a kitchen. It airs on Hallmark Channel Christmas Day at 11 pm/10c and on New Year’s Eve at midnight/11c

2016’s A Wish for Christmas stars Chabert and Paul Greene in a tale of a woman who finds her backbone when one professional snub too many makes her ask Santa for the ability to speak her mind, but it’s a limited time offer. You can catch it Christmas Eve at midnight/11c and December 29th at 4 pm/3c on Hallmark Channel.

Chabert and Brennan Elliott, who are Hallmark fan favorites from the All of My Heart films, star inÂ A Christmas Melody (directed by Mariah Carey) as a single mom and music teacher who find romance when they have to work together on her daughter’s Christmas pageant. It airs December 23rd at 6 am/5c and December 28th at 2 am/1c on Hallmark Channel.

Family for Christmas, also from 2015, plays the “what if” game as Chabert reminisces about her lost love (Tyron Leitso) and makes a wish that gives her the opportunity to travel that alternate path. It’s no longer airing this season, but keep an eye out for it in July and next winter.

In 2014’s A Royal Christmas, Chabert is Emily, a working-class American seamstress who finds out at Christmas that her lovely European boyfriend, Leo (Stephen Hagan) is actually a prince, and his mother (Jane Seymour) is none too pleased about their romance.Â  It airs December 23rd at 10 pm/9c and December 28th at 2 pm/1c on Hallmark Channel and is on Amazon Video and DVD.

Also in 2014, over on UP Television, Chabert did the charming The Tree That Saved Christmas. In it, she stars as a woman who changes her mind about skipping the family Christmas when she learns that her family’s tree farm is facing closure and a sale. Corey Sevier co-stars as her high school sweetheart who stayed behind. You can catch it on UP on December 23rd at 1 pm/NOON c.

2012’s Matchmaker Santa has Chabert as a baker again and throws in a little It Happened One Night/The Sure Thing as her character, Melanie, is paired on a road trip with her mismatched boyfriend’s BFF (Adam Mayfield) and discovers he’s much better suited to her. She also keeps getting surprise visits from someone who may or may not be Santa Claus. It airs Christmas Eve morning at 2 am/1c and December 27th at 6 am/5c on Hallmark Channel.