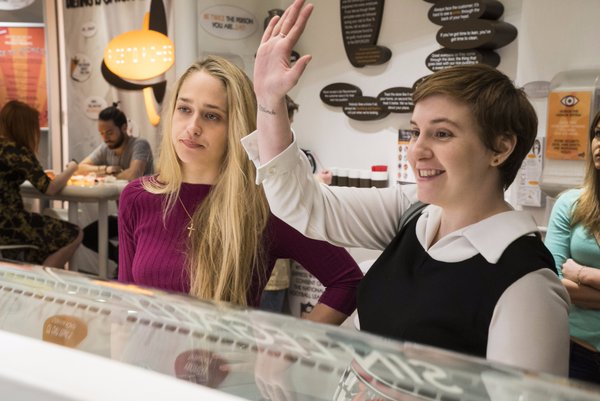 Shoshanna: “Even though I’ve only been here for a very short while I truly feel like this is my home and you people are my family and I don’t really care about people in America anymore.”

For the record, I would love for there to be a Shoshanna in Tokyo Girls spinoff comedy. I would also like there to be another spinoff series once Girls ends that’s centered on Elijah and Dill Harcourt. Is that too much to ask?

Dill didn’t appear in last week’s episode but we did get plenty of Tokyo Shosh. I loved every bit of it. It feels like she’s found herself in Japan. That’s why it was so difficult to see her job come to an end there. BecauseÂ clearly, Shoshanna doesn’t want to go back to America where her “kind of” boyfriend Jason Ritter is anxiously awaiting her.

Okay, time out. I am such a huge fan of Jason RitterÂ that I’m supremely sad I’m not rooting for Shosh and Scott to be together. I always root for Ritter on whatever show he appears on. I championed him on Parenthood — I was completely #TeamMark over #TeamHank. I lost that one in the end and I still haven’t come to terms with it. I don’t know that I ever will.

Back to Girls and Shoshanna, who’s been managed out of her job. She has some serious chemistry with her boss and even though they spend one really weird night out, I don’t think she’s going back to the U.S. anytime soon. This makes me happy. I need to see more of her in Tokyo.

Meanwhile, I was on Hannah’s side in the whole Fran/photos of his ex-girlfriends debate…until she deleted those photos off his phone. Boo. I wonder if the images still exist in his cloud? It’s official: Marnie and Desi are married and are currently on their honeymoon. As for Jessa and Adam, they were super cute watching his guest star appearance on that procedural crime series that starred Lucy Liu. Loved her cameo. Love Jessa being supportive even more.

While I was all about Shoshanna last week, tonight I’m all about Elijah and Dill.

Fun Fact: Vella Lovell, the actress who plays Heather on Crazy Ex-Girlfriend,Â playsÂ one of Marnie and Desi’s neighbors.