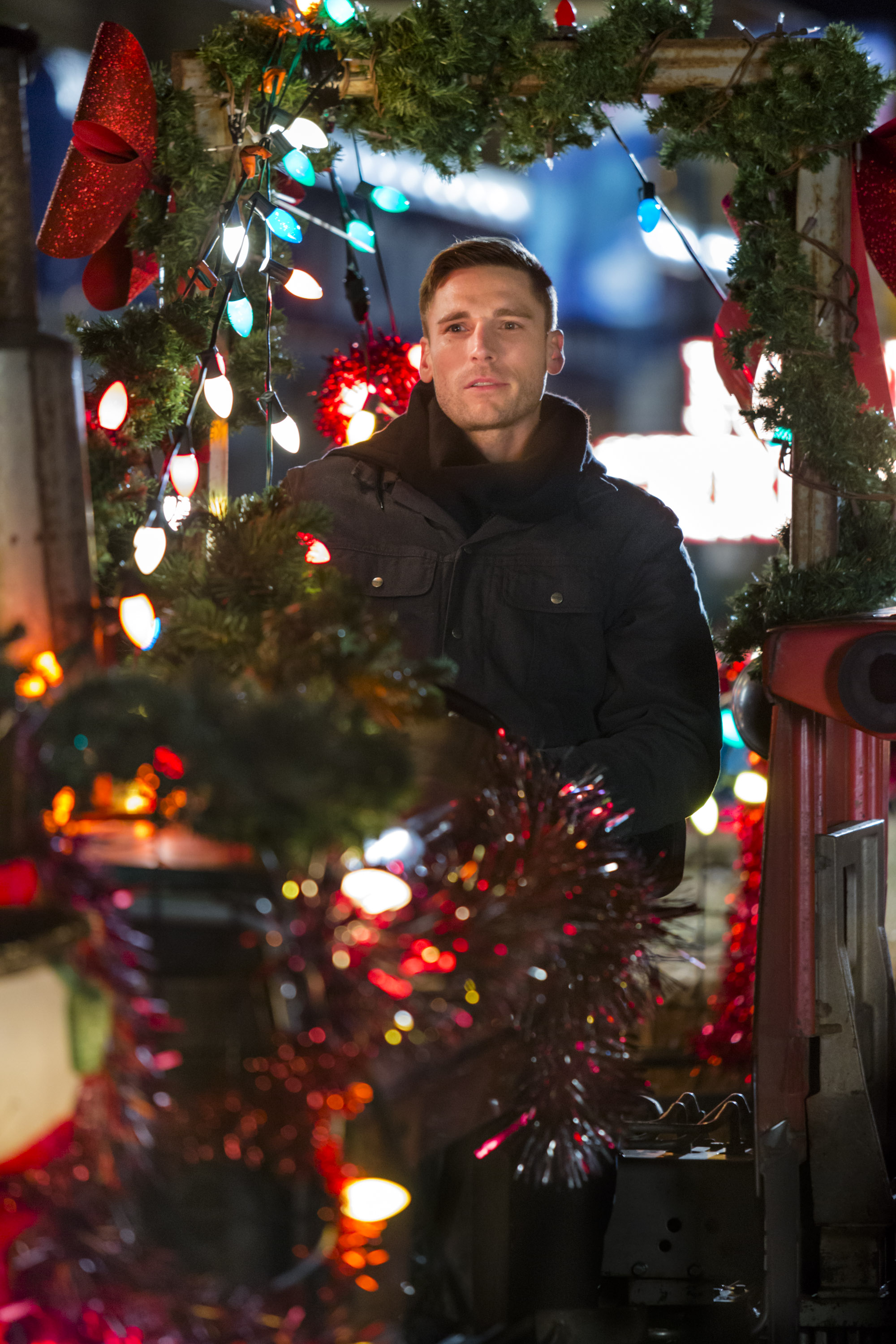 Stranded at an airport at Christmas-time, ASHLEY DAVISON accepts a ride from DASH SUTHERLAND, who has just rented the last car in town. Ashley sells crafts for a living, while Dash is supposedly a house painter. Although they initially clash, romance soon blossoms during their journey -- but the fact that Dash is a secret FBI agent who has been assigned to monitor Ashley, a suspected enemy insurgent, may ultimately put a crimp in their fledgling relationship... Photo: Andrew Walker Credit: Copyright 2015 Crown Media United States, LLC/Photographer: Eike Schroter

It’s time for the next installment of our 12 Days of Hallmark Holiday Favorites series.

If Alison Sweeney, Candace Cameron Bure, Catherine Bell and Lori Loughlin are the golden girls of the Hallmark universe, I think on the men’s side of things, some of the names that should be included in the “golden guy” conversation are Andrew Walker, Cameron Mathison, Paul Greene and Brendan Penny, to name a few.

For the purposes of this article, I’m zeroing in on Walker.His presence demands my attention. I mean, winter, spring, summer or fall, it feels like he’s in every single one of the holiday-and-season-themed originals Hallmark throws at us every year.

But that’s not where I was introduced to the actor. That would be on the cancelled-too-soon series Against the Wall, which aired on Lifetime. Abby, the lead female character, was embroiled in a triangle with a cop and a lawyer. Walker played Brady, the police officer in this equation.

Without wavering, I rooted for Abby to choose Brody even though he wasn’t as present as the lawyer. There was just something about Brody that made an impression immediately. And please don’t get me started on the cliffhanger ending that didn’t answer the question of ‘Who did Abby Choose?’ One of the more frustrating series finales since I loved the show so much. But I’m thinking Abby chose Brody. That’s the story I’m sticking to for now and forever more.

When it comes to Hallmark, it’s difficult to even narrow down everything Walker has been a part of. Over the years, our own Heather M has interviewed him several times and she has only great things to say about talking to him:

From Heather: He’s a gem. I’ve been watching his work for over a decade. He is always happy to chat, and he’s genuinely grateful for every project. It’s been fun to watch him take on these roles in recent years. In his earlier work, most often on Lifetime, it was even odds whether he’d be the bad boy love interest or just a bad boy (no complaints either way). I’m glad somebody took the first chance to make him a good guy love interest and he’s just run with it.

Here’s a list of some of Walker’s Hallmark Channel and Hallmark Movies & Mysteries appearances:

In A Dream of Christmas, he plays Stuart, the husband of Nikki DeLoach’s character, Penny.

Even though the two are married, she wishes she were single again. Shocking, I know. But when an angel grants her wish, she soon realizes she misses her relationship with her husband and regrets her new reality. She encounters him again in this alt universe but he’s taken.

Okay, here’s the thing about Debbie Macomber’s Dashing Through the Snow. The whole concept of this flick is crazy ridiculous. I mean, Walker plays a fed who gets close to Meghan Ory’s quirky person of interest as they road trip to Seattle. She’s wanted for something, I’m never sure. Apparently she’s a threat to national security. But guess what? I loved Walker’s chemistry with Ory so I simply concentrated on their interactions and their evolution from strangers to something more.

Speaking of chemistry, Walker’s the kind of actor that has it with just about every one of his costars.

Case in point: he and Arielle Kebbel showed mad sparks in A Bride for Christmas. Her character was a bit of a mess. She couldn’t commit for the life of her. In fact she’d broken three engagements, most recently leaving a guy at the frickin’ altar.

His character was also a hot mess. He made a bet with his friends that he could get a girl to marry him by Christmas…a mere four weeks away. The two were both commitment phobes but, of course, they found love with each other.

And here’s a bonus recommendation: Walker recently starred in one of my favorite new Christmas movies. It’s not on Hallmark, however. I suggest you find out if Lifetime’s Snowed-Inn Christmas is repeating again. He stars with One Tree Hill‘s Bethany Joy Lenz. The two snap, crackle and pop together as they play opposites. They are writers in competition with each other. Whoever gets the better story will stay with the company. The other one may be out of a job since downsizing is a real possibility.

The co-workers end up in Santa Claus, Indiana where they learn about each other and fall in love (duh!). But everything Walker’s character does in this movie is, well, everything. In all of his projects he has this way of injecting his characters with charm and joy and a vulnerability that compels you to root for him even though we all know what’s going to happen in the end. (Spoiler Alert: He’s gonna get the girl.)

In conclusion, Walker’s the perfect leading man and he should be celebrated. Here’s the rundown for some of his films and their upcoming airdates: