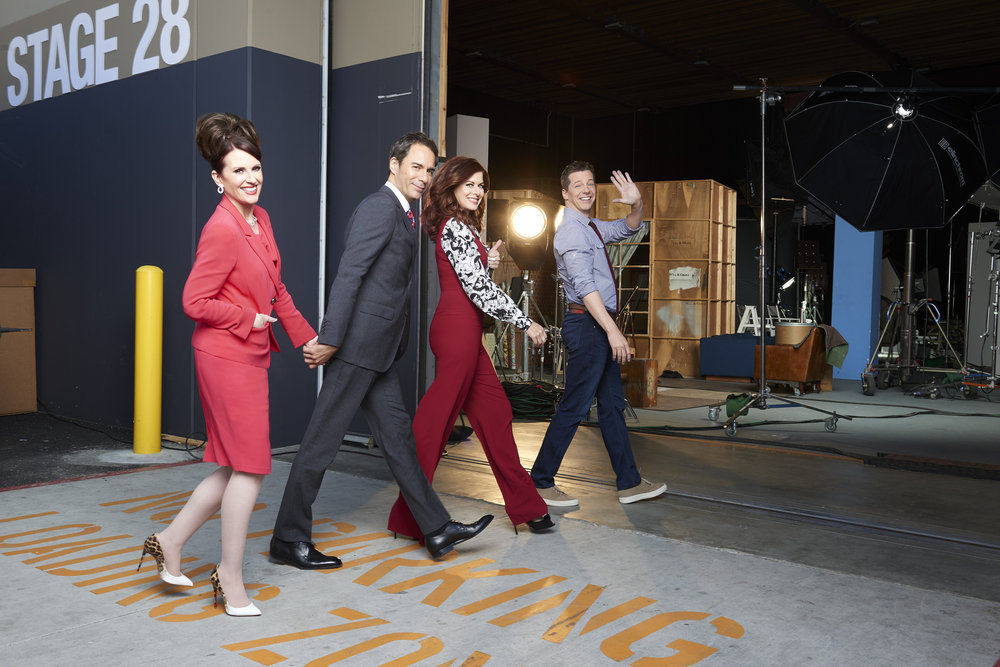 In its original eight-season run from 1998 to 2006, I had a love/meh relationship with Will & Grace, and while I watched it until the end, I did not watch all of its 194 episodes. Instead, it was one of those shows I would step in and out of as real life ebbed and flowed and I was in the mood for it.

As hysterically funny as it often was, it could also be surprisingly poignant. A few times here and there they just broke me–the nod to communal 9/11 grief channeled through Grace’s breakup with Nathan (Woody Harrelson) in “Bed, Bath and Beyond” and her wedding to Leo (Harry Connick, Jr.) that sparked a rooftop goodbye dance with Will in “Marry Me a Little More“–stand out. I also call someone “poodle” at least once a day.

That said, I was decidedly not a fan of the way the series wrapped up, with a time jump, two-decade estrangement, and separate marriages/lives/families before a reunion through their grown children. I just called bullshit that such a division would have ever come to pass between these two people. So, when the reboot was announced, I was on record that if that was retconned away, I was in. I’m happy to tell you that it is and I am.

Shephered by the original creators David Kohan and Max Mutchnick, that ending is reconciled pretty quickly and then we pick up with a modern-day quartet of Will (Eric McCormack, who you can also catch on Netflix in the excellent Travelers), Grace (Debra Messing who we last saw on The Mysteries of Laura), Jack (Sean Hayes, who has expanded his repertoire to producing shows as varied as Hollywood Game Night and Grimm), and Karen (Megan Mullally, who has a recurring voice role on Bob’s Burgers and in Children’s Hospital) still hanging out and cracking wise in Will’s apartment.

The premiere spends a considerable amount of time fretting about the current occupants at 1600 Pennsylvania Avenue, with whom Karen is on a first-name basis (of course). That theme is no surprise considering that the 9-minute short produced during last year’s election sort of kickstarted their return.

It’s funny to realize that the show missed out entirely on the last administration, so their vehemence here doesn’t have a callback to a happier time. If you watched the original run, you’ll recall they were sort of apathetic, if anything, about politics. On top of that, we also add the new trappings of social media and cyber-dating that weren’t quite as evolved, or were nonexistent, back in 2006.

The premiere easily dials right back into the vibe that was so endearing about these characters and their bonds with each other. I always believed Will and Grace were each other’s true love without the pesky romantic entanglements, so I’d bristle when they hit snags in their relationship and veered into really ugly fighting. Here, they acknowledge that they’re older and wiser, but not perfect, and they’re going to piss each other off, but they’re also each other’s constant and consistent, best hope for happiness.

Jack and Karen do the lighter lifting, with Jack still a free spirit searching for his purpose and maybe a little something on the side while Karen is still happily neck-deep in decanters, flasks, martini glasses, and so on. In the premiere, she laundry lists associations with predecessor Republicans but pauses long enough to do her actual job with Grace and be Jack’s cheerleader when needed.

In short, 11 years on, a lot is the same, and that’s OK. Right now a little escapism is more than welcome, and if it’s through old friends, even better. I’m happy they’re back to be silly and hopeful and genuinely affectionate with each other.

The reboot has been a gift for all involved (who were all busy on other projects but made time for this, similar to The X-Files snagging their cast again) because they’ve held onto all that camaraderie for over a decade. There’s a fair amount of on-camera, “Screw it, we’re having a ball and we’re going to laugh out loud,” going on. I think you will, too.

Will & Grace premieres Thursday on NBC in its old 9 pm/8c timeslot. You can catch Seasons 1-8 now, and repeats of the current season after their NBC airing, on Hulu. Here are a few sneak peeks.

Bull Loses His Polish in Season Premiere "School For Scandal"