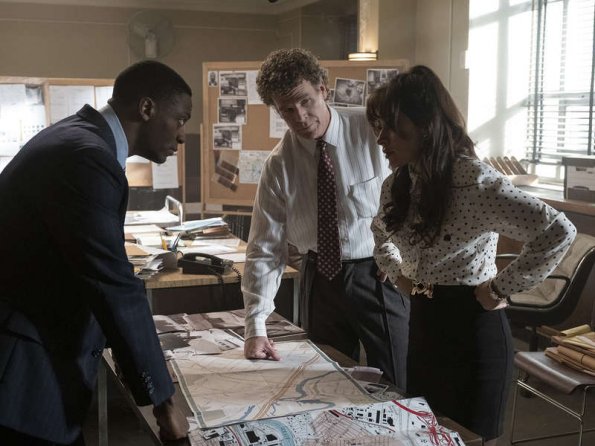 You could be forgiven for thinking that Jackie couldn’t do anything more hotheaded than he did last week when he shot Clay Roach point blank, but you be wrong. Tonight on City on a Hill, his self-serving ways get the better of him again, and again, there are consequences.

DeCourcy [I’ve had it wrong all this time–the name plate on his desk init caps the C!] finally has the right conversation to move the needle on the armored car case and it’s a momentary victory for him, Rachel, and Hank. He also walks down memory lane with Siobhan about the ebbs and flows of their relationship and the role of outside influences on their happiness.

Rachel and Hank tail Jimmy hoping for a break. Jimmy’s at his wit’s end and also does something rash that reverberates across the family. Frankie gets the guns and the team and readies the crew for another run, which makes Cathy exceptionally nervous this time around.

Rachel also finds Clay Roach and decides to have a conversation with Clasby (Michael O’Keefe) and she tips her hand on how she found him, which rattles him. That also cascades back to Jackie and sets him on the warpath.

Jenny makes decisions for herself and Benedetta and has a heart-to-heart with a classmate where we learn about the horrible thing that’s been hinted at. And that raises a lot of questions about the life she’s led since.

Adam Bernstein directs a script by Matthew Nemeth. If there wasn’t already a second season on order, I’d be concerned about where we are as we head into the finale next week, but the pacing works to set up a second season arc.