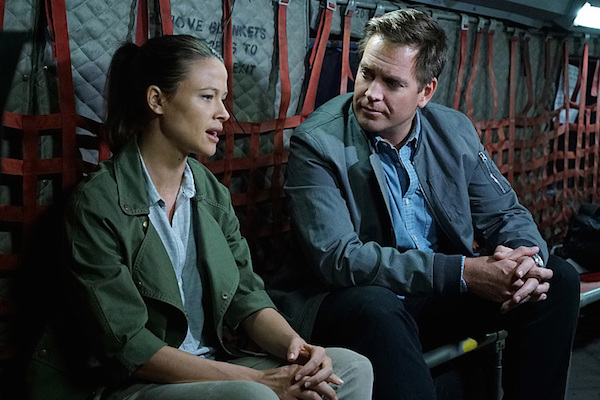 I’m not going to lie. I haven’t been this excited for an episode of CBS’ NCIS in quite a while. In fact, it’s been a while since I felt inspired to write about this series. It all has to do with the return of a certain character. For Tony DiNozzo fans, this moment is a LONG time coming.

Yes, Jeanne Benoit is back. I’ve been anticipating this episode ever since Scottie Thompson herself tweeted the news last month.

It has been quite a while… Reunited and it feels so good! @M_Weatherly @NCIS_CBS pic.twitter.com/27351cT9mD

Jeanne is Tony’s ex — the one he got much too close to while he was undercover way back in Season 4. In fact, it was his mission to get close to Miss Benoit. Don’t take it from me. Let McGossipGirl explain it. McGee is right. Things ended badly for Tony and Jeanne. In Season 5’s “Internal Affairs,” Jeanne came back into Tony’s life only to accuse him of murder. Her anger was palpable even as she knew she was lying to NCIS and the FBI. She wanted to hurt him as much as he had hurt her. Accusing him of killing her father the arms dealer was a good way to do it. Only, her testimony didn’t hold up. The then Director of NCIS — Jenny Shepard (Lauren Holly) — saw right through her act immediately. The last time we saw Jeanne, she and TonyÂ had what one could consider a devastatingÂ conversation.

When I say devastating, I mean it. Tony was never the same. He lied to Jeanne in order for her to be able to move on with her life. But we know he LOVED her. And after that lie, he wasn’t the same. I don’t know if it was the writers or the talents of Michael Weatherly, but this relationship and the way it ended so spectacularly bad weighed on Tony. Like McGee said in the clip, TonyÂ hated himself after what he did to Jeanne, especially the way he obliterated her in front of that elevator. BackÂ in Season 4, I wish the show had done a better job of executing this storyline, but it was always clear that this relationship was integral to Tony’s very existence. So even though I wasn’t a fan of the big picture, I adored many of the moments the two shared. The end of Tony/Jeanne shook him to his core. For the longest time, he wasn’t as confident. Things weren’t the same when it came to women. All you have to do is refer to Season 6’s “Knockout.” Just watch his scenes with Tara Kole (Mistresses’ Rochelle Aytes) to see what I’m talking about. This reunion promises to be dramatic and painful. I’m so curious to see how Tony and Jeanne will interact.

DiNozzo is reunited with his ex-girlfriend, Jeanne Benoit, when insurgents in Sudan attack a group of volunteer doctors, including her husband. DiNozzo and McGee travel to the crime scene for the joint murder and kidnapping case and join the search for the missing doctors.

I’m probably overhyping this but, for me, this is going to be huge. Epic, even.Â And if that isn’t amazing enough, there’s someone else I spotted on the guest cast list that I’m going to enjoy seeing tonight. Yes, Joel Gretsch also returns as Stan Burley. He was Gibbs’ Senior Field Agent before Tony. I don’t know how or why he’s coming back (we haven’t seen him since Season 10’s “Squall”) but I do know it’ll be good to see him again. Jon Cryer also returns with ties to the case of the week which is a good thing because Gibbs has another health scare. Watch the clip below for another “Saviors” sneak peek. NCIS airs tonight at 8/7c on CBS.

Currently you have JavaScript disabled. In order to post comments, please make sure JavaScript and Cookies are enabled, and reload the page. Click here for instructions on how to enable JavaScript in your browser.