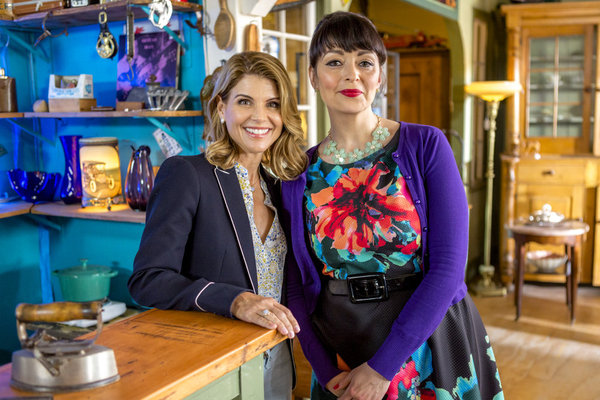 The films run the gamut in mysteries,Â feature all of the core cast (Lori Loughlin, Sarah Strange, Steve Bacic, Eva Bourne,Â Connor Stanhope,Â Kevin Oâ€™Grady,Â andÂ JayÂ Brazeau), and are all directed by Neill Fearnley (new to the franchise but known to several of the cast from When Calls the Heart and Cedar Cove). Three are written by Walter Klenhard (who’s now written 10 of these) and the last one of the month is written by Kraig X. Wenman. Here’s what to expect from each:

A collection of valuable classic surfboards brings Jennifer into this mystery after a young internet entrepreneur, Garrett Winters, is found drowned in the ocean, the apparent victim of a surfing accident. His beautiful wife, Annie, comes to the store because Garrett had a collection of old and valuable surf boards and she doesnâ€™t believe the death was accidental. Chiara Zanni, who we saw last month inÂ Home for Christmas DayÂ guest stars.

Jennifer agrees to sell some collectible tour jackets on behalf of bass player Lita Merrill, who is about to go on the road with local country singer John Dalton. On the day of Daltonâ€™s special hometown concert, Lita abruptly quits the band via a cryptic text. When she is subsequently found hung to death in her living room, the case is ruled a suicide. Jennifer canâ€™t square that conclusion and starts her own investigation. Guest stars include Hallmark familiar faces (and RL siblings) TeganÂ and Jesse Moss and Matt Ellis, Gabrielle Miller, and newcomer Kurt Teixeira.

Jennifer follows the trail of a killer after discovering a dead body in a suit of armor purchased for her client. Guest stars includeÂ Andrew Dunbar, who played Detective Iverson in the first film, Cedar Cove‘s Sebastian Spence, andÂ Eric Pollins (A Dash of Love).

A Case of Murder — August 27th
Jennifer purchases an old tape recorder which holds a recording she suspects might be of an actual murder.

The films will premiere every Sunday in August at 9/8c on Hallmark Movies & Mysteries. Here’s a sneak peek.

Game of Thrones Preview: "The Spoils of War"