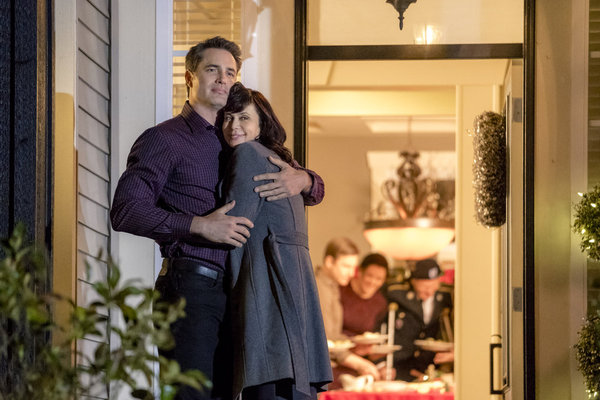 If the first two out of the gate are any indication, we’re in for a very strong Christmas movie season. Hallmark Movies & Mysteries does their Christmas in July sneak peek premiere Sunday night with Home for Christmas Day, which stars Catherine Bell in her very first non-Cassie Nightingale role for the networks, Victor Webster (a Hallmark film regular who will also recur on Chesapeake Shore‘s upcoming second season), Cedar Cove‘s Matreya Fedor, and When Calls the Heartâ€˜s Anthony Konechny

Because it’s on HMM, we know we’re in for more dramatic fare, and this one does not disappoint in a parallel love story about a single mom who’s fortified her 18-year old daughter to be self-reliant only to watch her potentially fall into the same doomed choice she made two decades earlier.

Bell plays Jane McKendrick, a successful realtor in the small Army base town of Garland. Her high school senior daughter Betsy (Fedor) is an aspiring veterinarian and waitress at the diner owned by Jackson (Webster), who’s carrying a not-so-secret flame for Jane despite residingÂ firmly in the friend zone.

They’re all reasonably happy until Betsy meets Army privateÂ Tyler (Konechny) at the diner. It’s Christmas break, so while she’s working at the diner and volunteering atÂ a local clinic andÂ shelter, she still has enough time to quickly develop a romance that’s accelerated when Tyler tells her right off that he’s deploying before Christmas.

Jane finds her usually open and honest daughter is less so about her new relationship, partly because Jane was widowed by a military man while pregnant and in her 20s. Jane’s partner, Meg (Chiara Zanni, who I will always love for About a Girl) tries to talk Jane down from her panic, but while Jane and Betsy disconnect,Â she also finds her friendship with Jackson slipping away when he considers selling his diner.

Everybody here does really, really nice work, and I’m so pleased to see Bell switch it up from Good Witch to playÂ a woman who’s not completely certain about every choice she’s made or is yet to make and is open to accepting thatÂ she still has time toÂ course correctÂ Â The military theme isÂ familiar territory forÂ Bell and I’ve no doubt the Army Wives fans will completely embrace the film.

Fedor is excellent as a young woman who’s been raised to be independent and level-headed and suddenly realizes that her plans never allowed for the possibility of falling in love, much less with the added threat of loss.

Konechny strikes a nice balance asÂ a soldier far from home who finds a friendly face and then unexpectedlyÂ something so much more and has to navigate accidentally planting himself between a mother and daughter. Look for a really powerful scene between Bell and him when Jane comes to the base to speak to Tyler.

Webster is lovely in a quiet role, playing Jackson as a good man who’s stood by his friend for a very long time until he finallyÂ wakes upÂ that as much as Jane and Betsy have become his family, once Betsy starts her own life, he wants more than Jane can give and he’ll have to decide if he can live with that.

Gary Harvey (Walking the Dog) directs a script by David Golden (Finding Father Christmas) based on a story by Jennifer Aspen (Sharp Objects), who also has her first producer credit on the film.

Home for Christmas Day airs at 9/8c Sunday on Hallmark Movies & Mysteries and will join the 2017 Christmas movie lineup later this year. Here’s a sneak peek.

Dark Matter "Wish I Could Believe You"