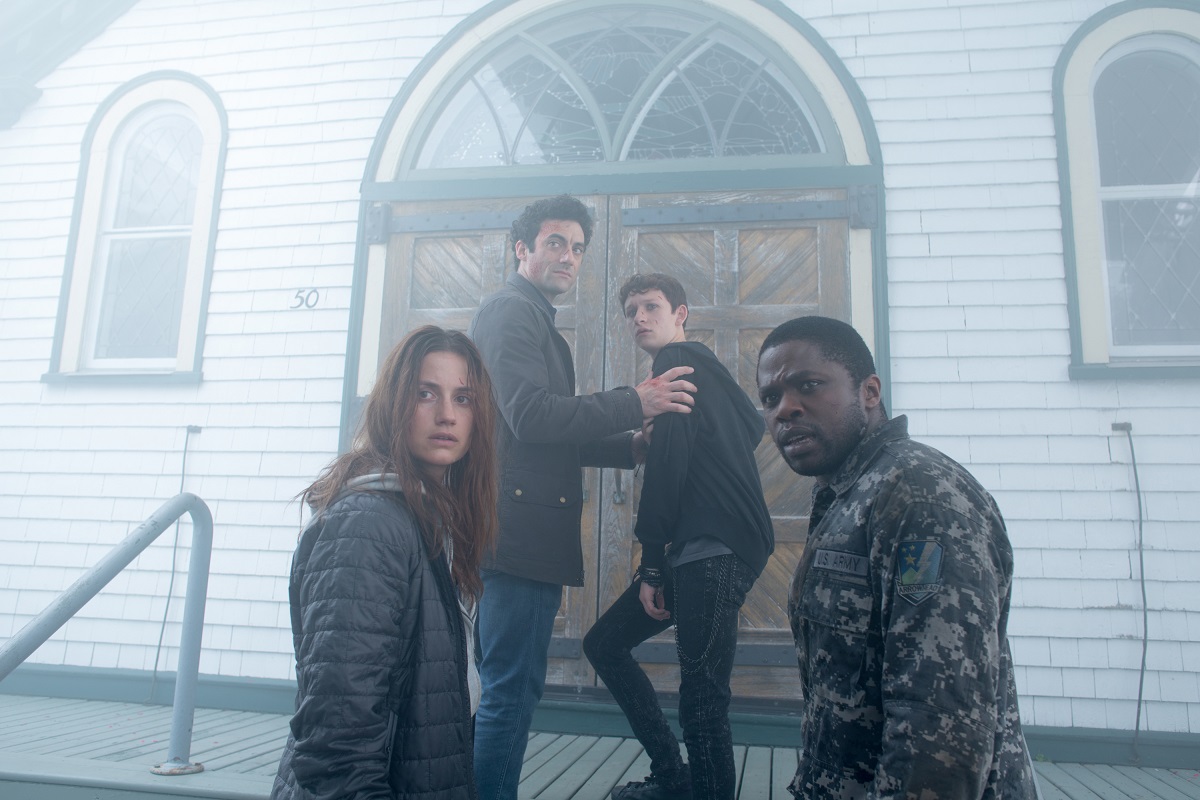 Spike joins the peak TV fray this Thursday night with its first scripted drama series, The Mist, based on the Stephen King novella within The Skeleton Crew collection.Â It’s part moody family drama, part mystery, part horror, and totally my bag. Bonus: it was filmed in Nova Scotia, home to Haven, another Stephen King adaptation that we love around here.

Full disclosure: I’m gauging the show for the show’s sake, not vs. the novella or the 2007 film as itÂ expands way beyond the single group seeking refuge together that was portrayed in the both.

The setting is Bridgeville, a small town in Maine (of course), where everybody knows everybody else, and not always for the greater good. The key players we meet in the pilot are married couple Eve (Vikings‘ Alyssa Sutherland) and David (Person of Interest‘s Morgan Spector) Copeland, and their daughter Alex (newcomer Gus Birney) and her best friend Adrian (Russell Posner), who’s battling his own parents due to his newfound gender fluidity.

Their next-door neighbors are Nathalie (American Horror Story‘s Frances Conroy) and Benedict (Derek McGrath) Raven; she’s described an ecological martyr with a little knowledge and a lot of faith.Â Bryan Hunt (Shuga‘s Okezie Morro) is an amnesiac soldier; Mia (The Bridge‘s Danica Curcic) is a mysterious womanÂ seemingly on the run and trying to get out of town.Â The police chief is Connor Heisel (Madam Secretary‘s Darren Pettie) and hisÂ son isÂ Jay (Luke Cosgrove), the star of the high school football team.

As we begin, teacher Eve is newly out of a job for a decision she made with her students that chafes against the more puritanical parents and members of the board. While she and her husband grapple with that, their daughter goes to a party withÂ David’s surreptitious permission in defiance of Eve’s ruling against it, and it goes really badly.

Bryan wakes up in the woods alongside a dog, not knowing who either of them are, but he sees the encroaching mist moving toward him andÂ runs into it, chasing after the dog, which also goes really badly. He breaks free andÂ heads hell for leather toward the town to warn people, who don’t exactly accept news via crazy ramblings.

Nathalie isÂ concerned when she sees all the wildlife fleeing andÂ goes with her husband to the library to see if it’s a first for Bridgeville. David and EveÂ deal with Alex’s situation separately,Â as David finds himself with Adrian while Eve is with Alex. Then the mist rollsÂ in and shrouds the town so heavily that no one can actually see through it. Suddenly, all the folks we’ve met are cut off in separate locations, terrorized by what they hear whenÂ the few brave/dumb folks venture out into it and disappear amidst terrible screams.

And that’s about all I’ll set up for you.Â The pilot establishes who these characters are in a state of normalcy so that we have a fairly good sense of them “before” to gauge how they’re different “after.”Â While notÂ truly a “post-apocalyptic” scenario,Â the show inhabits the same space as The Strain and Fear the Walking DeadÂ asÂ theÂ arrival of the mistÂ kicks the characters into survival mode, forcingÂ them to band together in ways they wouldn’t have before they were threatened with their lives. As long as we dial down anything else with animals, I’m in. The pilot had a couple of scenes that made me queasy, but they were quick enough that it didn’t torpedo the show for me.

It also highlights a common theme for King–people are capable of being completely shitastic on their own, without any external boogedy stimuli, and often get the Bad ThingÂ they deserve,Â which then heightens the propensity for folks (good or bad)Â  to do bad things. The series was adapted by Danish writer and director Christian Torpe in his first American TV project.

The 10-episode season of The Mist begins this Thursday at 10/9c on Spike. Here are a few previews to get you ready! You can see all of them here