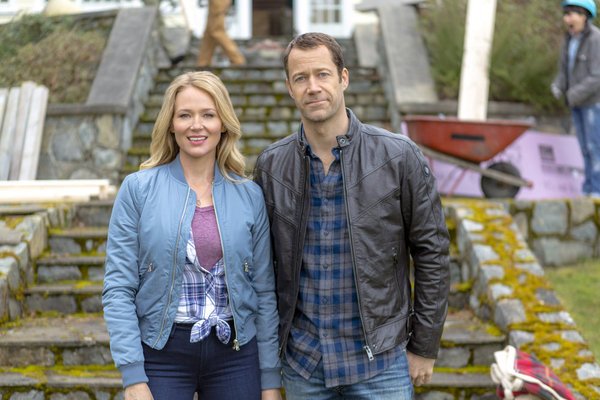 Just three months after Framed for Murder aired, Jewel and Colin Ferguson are back Sunday night in Concrete Evidence, the second installment of Hallmark Movies & Mysteries’ A Fixer Upper Mystery film series based on the books by Kate Carlisle. They’re two for two on really enjoyable mysteries with just a hint of romance.

Shannon is just beginning the restoration of Mac’s house, a.k.a. The Craddock House, when the renovation is stopped cold by the discovery of a skeleton in a dumbwaiter, who happens to be Lily, Shannon’s high school classmate and the older sister of her foreman, Sean (Bitten‘s Sean Rogerson).

Lily was thought to have left small town life for the call of Hollywood 20 years earlier, and the news of her death, which looks a lot like murder, reopens all sorts of high school drama for Shannon, Sean, Jennifer (Erin Karpluk), and their former classmates, who include the championship quarterback and Lily’s boyfriend at the time, Cliff (Ben Cotton of Mars and Van Helsing), who’s now Shannon’s chief business rival in town, and the now-married Brad and Denise Jones (Chesapeake Shores‘ Michael Karl Richards and Jenn MacLean-Angus, who appears in this week’s Riverdale) who are the current athletic director and theater teacher at the school.

At Sean’s request, Shannon sets out to help solve the murder and Jennifer jumps in to help. The upside is that Shannon gets to spend more time with co-investigator, Mac, who’s blocked on his new book and eager for any reason to procrastinate (and slyly flirt with her); the downside is that investigating puts her on the radar for new threats.

All of the core cast from the first film–Karpluk as Shannon’s BFF, Ron Lea as Shannon’s dad, Colin Lawrence as the police chief, and Jason Cermak as his deputy, Tommy–return with Jewel and Ferguson, which lends this outing a nice familiarity as Shannon leans on her extended family and friends. Hallmark regulars Teena BoothÂ  (who wrote the first Fixer Upper) adapts the novel and Mark Jean directs.

John Cassini, one of my Canadian crew from Da Vinci’s Inquest and Intelligence (and MacLean-Angus’s husband) is a supervising producer, which I love. I also enjoyed seeing Rogerson, who was shudder-inducing as Aleister, the big bad in the second season of Bitten, play a good guy here. Note to Hallmark: please use him again and often!

Concrete Evidence premieres Sunday night at 9/8c on Hallmark Movies & Mysteries after a repeat of the first film, Framed for Murder, at 7/6c. Click here for a couple of sneak peeks and a look behind the scenes.