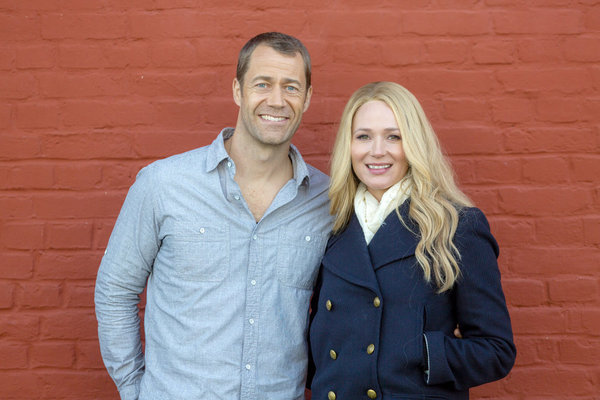 Sunday night, Hallmark Movies & Mysteries launches its new Fixer Upper Mystery film franchise based on the book series by Kate Carlisle. Headlined by Jewel, the films will follow her character, Shannon Hughes, a master home restorer who has a way of uncovering crimes. Because of a past personal history with police about a case close to home, she often plows ahead on her own to solve them.

The first film,Â Framed for Murder, co-stars two of our favorites: Colin Ferguson and Erin Karpluk. Ferguson plays Macintyre Sullivan, a potential new client for Shannon who gets pulled into her investigation when her neighbor, the beloved treasure hunterÂ uncle (Ken Tremblett) of her best friend, Jennifer (Karpluk), dies under mysterious circumstances.

The cast is rounded out by many familiar Canadian Hallmark (and When Calls the Heart)Â faces, including Ron Lea, who plays Shannon’s dad, Laura Soltis, who plays the uncle’s almost-fiancÃ©e,Â Bill Dow andÂ Marcus Rosner as a father and son in the close circle of friends, Colin Lawrence, as the police chief, andÂ Jason Cermak, as his deputy, Tommy, who’s been Shannon’s friend since grade school.

Jewel is very good anchoring the story as an extremely capable, self-reliantÂ woman whose insight into home design helps her see things others don’t as she starts to doubt that her friend’s death was an accident. It’s nice to watch her character bond with Mac but stay resolute that she’s on a dating hiatus regardless of how well they get along. She’s built a successful business and a family of longtime friends in her home town and she’s not pining for more than that. That’s refreshing.

Ferguson gets to tap into his Eureka sheriff zone here, as a crime reporter-turned-best-selling author who jumps at the chance to revisit his old investigative ways. He also works his trademark charm as Mac bungles his first few meetings with Shannon until they settle into a partnership about the case.

I’d like to see more of these characters, and I like everyone here, so I hope going forward they don’t tinker with the extended cast.

Framed for Murder: A Fixer Upper Mystery premieres Sunday at 9/8c on Hallmark Movies and Mysteries. Here’s a sneak peek.

The X-Files Preview: “This”