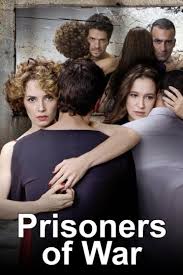 Back when Homeland premiered in 2011, I remember hearing that it was based an Israeli series. So, when I heard the original would be premiering on KCET, I knew I’d watch. Whether or not you’ve seen Homeland, there’s a lot of new and interesting and different material here. While it may seem familiar on the surface, Prisoners of War is a very different series.

I had the chance to talk to series star Mili Avital, who plays Nurit. Her fiance, Uri, has been a prisoner of war for 17 years and is finally on his way home. What does living in captivity do to a person? How did he survive his incarceration? What does Uri expect from Nurit now that he’s finally home? How can Nurit reconcile the man she used to know with the man who has returned to her?

My first question, of course, was how Mili heard about the series and what made her want to do it.

Mili Avital:Â â€œI received, in a pretty routine way, the script via my Israeli agent. Every now and then Iâ€™m sent scripts. So read it, as I do always, but this time I got the two first episodes.

I read them back-to-back and I called my agent in Israel right away. I said, â€˜I donâ€™t know who this Gideon Raff guy is, but this is absolutely brilliant and I want to be in it, I donâ€™t care as what,â€™ and she was excited.

I really didnâ€™t know who he was because Gideon lived in LA at the time, he went to AFI. Heâ€™s Israeli, but he has one foot in the US, as do I, but I didnâ€™t know him. Iâ€™d never heard of him.

Then my agent said heâ€™s interested in me for the role of Nurit, the one I played. And I was so disappointed. I thought really? Her? I wanted to be the other girl, even though honestly I wouldâ€™ve been a production assistant, I didnâ€™t care. I so wanted to be in this as whatever. [My agent] said, â€˜Yeah. He thinks youâ€™re more right for it.â€™

I had a hard time at first identifying with this character because she has a very strong internal conflict. She does something that is pretty bold and could be outrageous. I donâ€™t want to give away the plot, but what she does in terms of her choice after her fiancÃ© does not return for 17 years, she continues on with her life.

Israel is such a small place where people comment on each otherâ€™s life choices all the time — that to move on and marry and have a life is unheard of. Itâ€™s something that people really do criticize. So, I had a hard time. She moved on and she doesnâ€™t care about this guy, but that was exactly the challenge for me to find the place where I can understand this woman, who is not me obviously, but is somebody else making the choice that maybe I would as well.

That was my journey. Of course, now I love the character and I enjoyed so much playing her but it was interesting. It was a really interesting journey to have.â€

Mili Avital had a lot more to say about Nurit’s motivations and the consequences of her choices, but neither of us wanted to spoil the premiere. So come back after you watch for our post-mortem.

Aftermath Preview: "A Clatter and a Chatter"

The Walking Dead "The Day Will Come When You Won't Be"