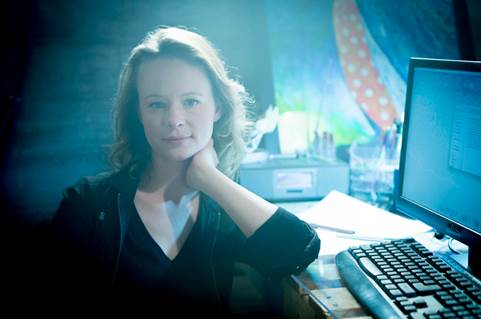 Itâ€™s not like Will didnâ€™t suspect Katie before. Phyllis’ private meeting herÂ earlier this seasonÂ caused him concern and even Jennifer accused Will of being the leak. So when Quayle confirmed Willâ€™s suspicions, we knew Will was going to do anything he could to help Quayle get out of the bloc. Of course things donâ€™t always go as planned, so instead of allowing Proxy Synder or the Transitional Authority to get their hands on Quayle, Will kills him. Even though Synder questionsÂ Will and Beauâ€™s version of events, Willâ€™s secret, and by extension his family, is safe â€” for now.

Will comes up with a plan to get his family out from under the Occupation. Throwing a wrench in his best-laid plans, Katie and Broussard attempt to rekindle the fire of resistance by joining forces with a new cell.Â  In a bold political move, Proxy Snyder fights to protect his office. Later, Maddie corners her boss in a precarious predicament.

While I’m apprehensive yet cautiously optimistic about Will’s plan, I’ve been waiting weeks for Thora Birch to make her debut. EP Ryan Condal teased her arrival a few weeks ago during a press call. He said: “Most of our guest cast has been introduced, but in the latter third of the season we will introduce a couple of new characters that play on more of the resistance side of the equation, one of whom is Thora Birch. [She’s]Â an absolutely wonderful actor, a terrific person and a great get for us on Colony. Weâ€™re very excited to introduce her character, Morgan, to the show and have everybody see into a little bit of a different corner of the world.”

What do we know? Thora playsÂ Morgan, a laid-back software engineer with a conscience.

Thora Birch talked to press earlier this week. She introduces her character, gives us a little more information about Morgan and hints at what we can expect in the last two episodes of Season 1.

How did you come to get this role?

Thora Birch: “So the script just appeared in my inbox one day. It was, ‘Hey, take a look at this part. Take a look at the show.’ I saw that Carlton [Cuse] and Ryan were involved and I was completely, immediately interested.

Getting into the script, itâ€™s one of those things where it seems really simple, like, ‘Oh, itâ€™s an invasion. Los Angeles is completely cordoned off.’Â The further you get into it, the more elaborate it gets. But at the end of the day itâ€™s still a family drama and I love that. I love that itâ€™s still about an emotional, real house of people. So it has this huge, high concept but itâ€™s still all about people.”

How did you prepare for this role?

Thora: “I donâ€™t have a lot of experience in the whole tech world, but I responded to my characterâ€™s determination to have an impact and to make her presence known in one way or another. She’s the complete package. Sheâ€™s got the know-how and sheâ€™s got the balls to pull off some amazing stuff.”

What more can you tease about your character and how’s she’s going to fit into the show?

Thora: “Iâ€™m not 100% completely clued in as my characterâ€™s trajectory either, but she is working on the resistance side of things. She is not a collaborator. Sheâ€™s definitely a resister. And her journey is only just starting. These two episodes that youâ€™re going to see this week and next week, itâ€™s only the beginning.

It is a recurring role. Sheâ€™s playing a part in a major operation that wraps up the season really nicely and leaves the audience really wanting more.”

What do you believe this cell can accomplish?

Thora: “Ttâ€™s a trifecta of skill sets. So youâ€™ve got me as a software engineer. You have an Avionics guy, and you have even more of a tech person. So we really are a unit. Without going into what happens too much, Iâ€™ll just say that probably our characters could not exist outside of each other. We rely on each other big time.”

Based on this sneak peek — and where things have been heading for weeks — next week’s Season 1 finale is gonna be intense: