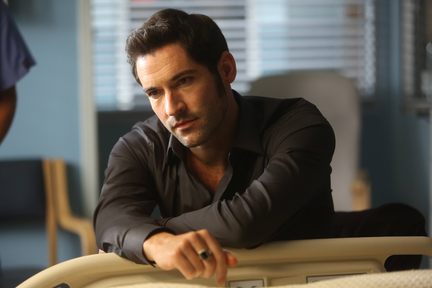 Lucifer’s going through a bit of a phase. He’s no longer ruling hell. He runs a cool club in Los Angeles. He’s avoiding almost everything that has to do with his former home. He’s also helping people and going to therapy. How’s that for the latest spin on the devil? He’s getting in touch with his inner do-gooderÂ and trying to figure out his daddy issues at the same time.

Something that throws him off his mischievous game is meeting a detective he can’t quite figure out. Let’s just say to her, he’s not as irresistible as he thinks he is.

FOX’s Lucifer tells the tale of a fierce fallen angel as a work in progress. There’s some mythology mixed in with a procedural element to the show. In the words of Tom Ellis, the show is “a lot of fun and it’s very entertaining.”

Based upon the characters created by Neil Gaiman, Sam Kieth and Mike Dringenberg for DC Entertainmentâ€™s Vertigo imprint, LUCIFER takes everything we think we know about the worldâ€™s greatest villain and flips it upside down. Bored and unhappy in Hell, LUCIFER MORNINGSTAR (Tom Ellis, Rush) abandons his throne and heads to the city of Angels looking for a heck of a good time.

Lucifer is devilishly handsome and charismatic, and he has a talent for drawing out peopleâ€™s darkest secrets. When the brutal murder of an acquaintance of his attracts the attention of LAPD homicide detective CHLOE DECKER (Lauren German, Chicago Fire), he is hell-bent on helping her find the perpetratorsÂ and discovers a passion for punishing the guilty here on earth. Initially, Chloe is dismissive of Lucifer, but when she sees him in action, she becomes intrigued. But Chloeâ€™s soon-to-be ex-husband and colleague on the police force, DAN (Kevin Alejandro, True Blood), is wary of Luciferâ€™s intentions, especially when their young daughter, TRIXIE (Scarlett Estevez, And Then There Was You), takes a liking to him.

As Luciferâ€™s interest in Chloeâ€™s cases grows, so does his curiosity about her. Of all the people heâ€™s encountered, sheâ€™s the only one who isnâ€™t affected by his devilish ways. And while working with her, for the first time in roughly 10 billion years, he feels something awaken deep within him. Compassion? Sympathy? The very thought disturbs him â€“ enough to seek out the guidance of a therapist, LINDA (Rachael Harris, The Hangover).

Luciferâ€™s newfound humility infuriates his best friend and confidante, MAZIKEEN aka MAZE (Lesley-Ann Brandt, The Librarians), a fierce demon in the form of a beautiful young woman.

At the same time, the angel AMENADIEL (DB Woodside, Suits, 24), has been sent to Los Angeles by God to convince Lucifer to return to the underworldâ€¦can the Devil incarnate be tempted toward the side of Good, or will his original calling pull him back toward Evil?

When TV Goodness visited the set of the new series, Ellis admitted to the press that taking on Lucifer was a role he was “desperate to do,” but he wasn’t aware of the graphic novels that introduced this version of Lucifer to the masses.

Ellis also gave his analysis of Lucifer and talked about how the character will be less like a superhero and more human.

Here he provides a little more character analysis plus talks about Lucifer’s takes on kids and Chloe’s ex.

Lucifer premieres on FOX tonight at 9/8c after The X-Files.

The X-Files Settles In But Doesn't Settle: "My Struggle" and "Founder's Mutation"

Constantine’s Charles Halford Talks Chas, His Many Lives and the Season Finale [Exclusive]