Supergirl Preview: “Human for a Day” 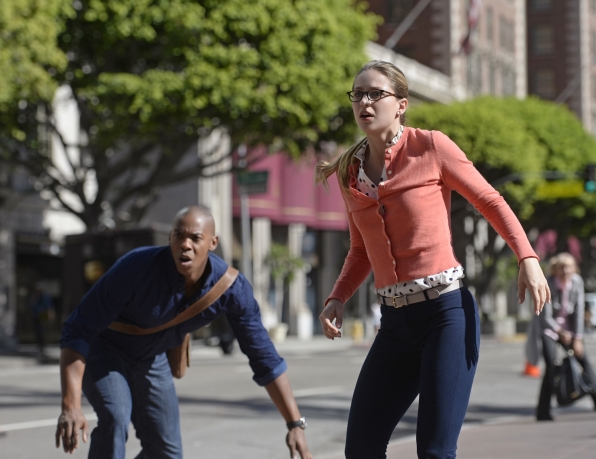 Last week’s episode of Supergirl was a big one for Kara. She worked on her anger issues, which resulted in a couple of breakthroughs.

The first was in an amazing scene featuring Kara and James. They were struggling with life (and superhero) things and Kara felt taking their frustrations out on a punching bag or — for her — a car, would be beneficial and she was right.

Kara: Oh my God. Cat was right. There is anger behind the anger.
James: Are there like extra emotions I don’t know about on Krypton?
Kara: No…I thought I was mad seeing you…seeing you and Lucy makes me think that I’m never gonna have what you two have. Someone who knows everything about me. My perfect partner at a game night.
James: Kara you’ll find someoneâ€¦
Kara: Growing up on Earth, I never felt normal. And I always thought that if I started to use my powers my life would make sense. But I’m realizing that being myself doesn’t make me feel more normal and it never will because my normal life ended the second my parents put me on that ship. And that makes me so…mad.

This emotional breakthrough provided some great Kara POV. It enabled her superheroic self to defeat the bad guy (aka Breakthrough #2). Up until her final confrontation with Red Tornado, she let her anger control her. Thanks to the demolished car and a very insightful lecture from Cat, she realized she was no longer afraid of her anger. All she needed to do was “channel it to work for me and not against me.”

That’s what she did.

Kara destroyed Red Tornado after the robot became sentient. It was a powerful moment that also featured quick Kryptonian flashbacks. Her feelings over being sent away clearly take the top spot on her anger list.

TV Goodness recently visited the set of Supergirl where star Melissa Benoist talked to the press about this pivotal moment.

Digging deep to take care of Red Tornado wasn’t all positive. Apparently, there’s a side effect to unleashing all that power and energy. At the end of “Red Faced,” Kara was bleeding. Tonight she’s going to figure out what it means to be “Human For a Day.”

Official CBS Synopsis for â€œHuman For a Dayâ€

Kara and her friends must rely on their inner strength and courage when an earthquake strikes National City.

Also, Alexâ€™s mistrust of Hank reaches a breaking point when the earthquake traps them in the DEO with Jemm (Constantine‘sÂ Charles Halford), a powerful alien escapee.

The cast previewed the episode:

Melissa on Kara losing her powers

Supergirl airs tonight at 8/7c on CBS. Make sure to check back here after the episode for more intel on what goes down in “Human For a Day.”

Once Upon a Time "Swan Song"