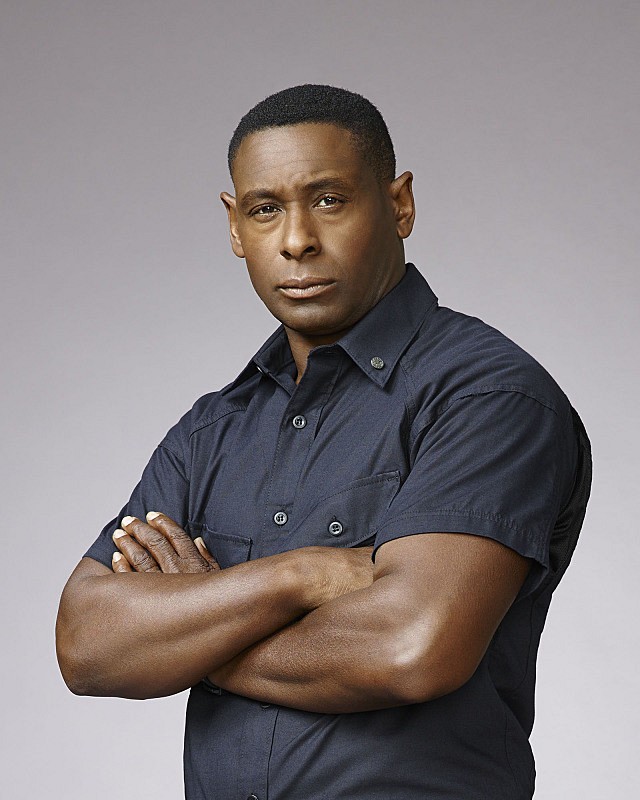 All season long, we knew something huge was up with Hank Henshaw (David Harewood). Didn’t think it was going to be this.

It was revealed in Supergirl “Human For a Day” that the DEO boss — the one with the mysterious red eyes — was none other than J’Onn J’Onzz aka Martian Manhunter — one of the seven original members of the Justice League of America. Here’s a photo of Hank’s true form:

EP Andrew Kreisberg was excited to talk about this development during a Supergirl set visit with press. He said the idea of making Henshaw the Martian Manhunter was born out of a conversation with EP Greg Berlanti and DC Comics’ Chief Creative Officer Geoff Johns on the set of the pilot.

Andrew Kreisberg: I don’t remember which one of us said it, but it was like, ‘Oh, if we were ever going to make a Martian Manhunter show or something, David would’ve been the perfect Martian Manhunter.’ And it was Geoff who said, ‘Well, why can’t he be?’

Originally Hank’s secret was going to be much more nefarious.

Andrew: We already had the Hank Henshaw idea set up that we would be playing this sort of bad secret that he was holding. Then we started thinking about it. It was like, “Oh, well, wait a minute. What if it’s a good secret? What if it’s the reverse of The Flash? What’s the reverse of the Reverse Flash that you think he’s bad, but he turns out to not only be good, but literally be the most good person in the DC Universe?”

And from there, Hank’s backstory was changed.

Andrew: Oh, actually, if he survived Mars and came here, and his whole goal was to protect Earth and not let Earth suffer the same fate as Mars. Well, then, he’s doing exactly what Kara says and what Astra says, which is, â€˜Not here. Never again.’ He’s had to lead this crazy existence, pretending to be Hank Henshaw, and he doesn’t want Supergirl around. She could mess everything up. And we’re like, ‘Oh. It actually all fits.’

Apparently, David Harewood’s first reaction was, “I’m not going to be Shrek, am I?” The actor quickly became excited about the potential of being this force for good.

Andrew: The more we thought about it, everything just sort of flowed from that. We’ve got White Martian episodes and Jemm, and it’s sort of the secret of Supergirl that, within the body of the series of Supergirl, there is a Martian Manhunter series rolling throughout it.

Having Martian Manhunter around opens things up in a character-driven way.

Andrew: It’s been really fun, and it actually so fit in with how Supergirl has been evolving, and how she’s somebody who’s embraced her powers and stepped out into the light. And in a way, J’Onn is closeted, and he’s afraid. Then he says in an upcoming episode, which I actually just watched last night â€“ and Alex is actually encouraging him to use his powers. She says, ‘What’s the difference between you and Kara?’ And he said, ‘Your sister looks like a cheerleader and I look like a monster.’

Don’t think it’s enough to say that David Harewood’s excited to reveal this other side of Hank Henshaw. In fact, his co-star Chyler Leigh says he was like a “kid in the candy store” on the set. He was a little anxious at first since he didn’t know his character’s identity from the very beginning. But once he did, he was ecstatic.

Not every actor grows up being a comic book fanboy or fangirl. So I had to ask Harewood what he originally knew about Martian Manhunter. He didn’t know much. Now he does.

Are you excited about the big reveal? Let us know. The mid-season finale of Supergirl airs next Monday, December 14, on CBS.

Supergirl Preview: "Human for a Day"