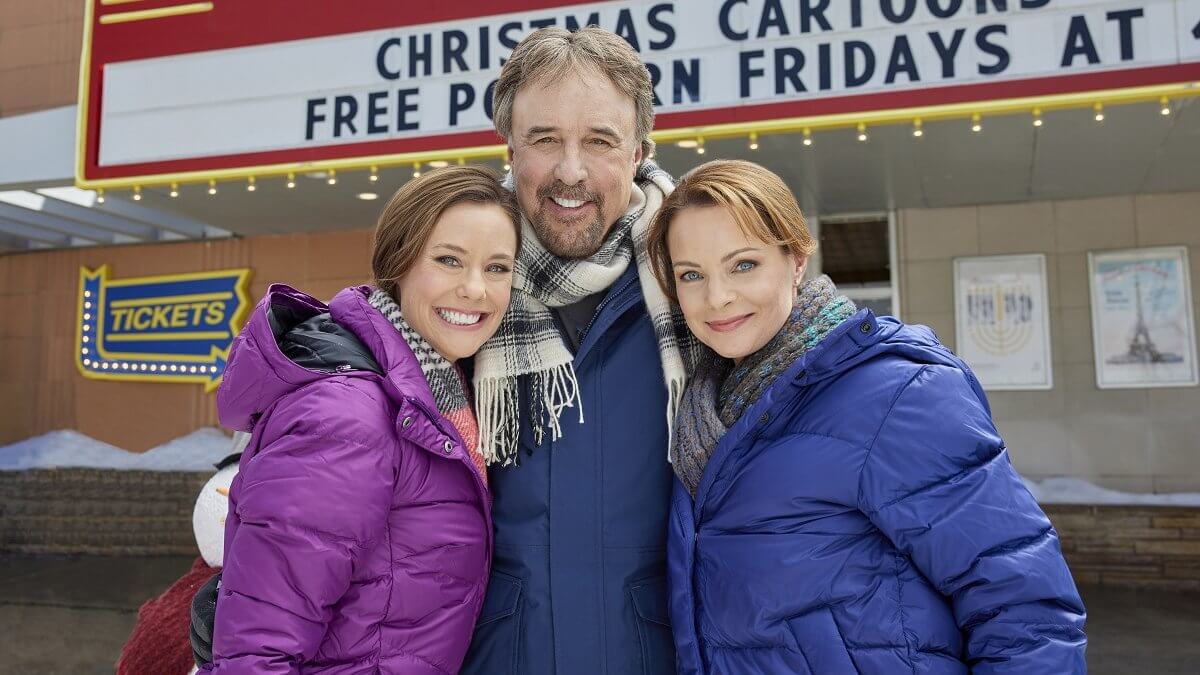 Separately, sisters Kimberly William-Paisley and Ashley Williams have become Hallmark staples, and this Sunday and next Sunday, they pool their talents for the first time in a pair of movies that flip the perspective on a threaded story. The first film, Sister Swap: A Hometown Holiday, is anchored by Williams-Paisley, starring as single mom and restaurateur Jennifer Swift, who, along with her teenage son, Simon (Colony‘s Jacob Buster), heads home from Salt Lake City to the small town of Hazelwood for the holidays to visit her parents, Debbie and Luke (Anna Holbrook and Jim Byrnes).

It’s their first Christmas without Debbie’s brother, Jennifer’s beloved Uncle Dave (Kevin Nealon, seen in flashbacks), and the last Christmas that they’ll have his landmark single-theater cinema in the family, now that Debbie has decided to sell it. Jennifer teams up with old school friend, Eric (Mark Deklin), also recently widowed, a single father, and newly back in town, to throw one last Christmas celebration before they let it go.

Back in Salt Lake City, Jennifer’s sister, Meg (Williams), has stayed behind to handle a a holiday event at Jennifer’s restaurant, and throughout the film, we get glimpses of how that’s going in split-screen phone calls, and Meg pops back into Hazelwood a few times, too. Next week’s alternate version of the story, Sister Swap: Christmas in the City, does a deeper dive on Meg’s point of view and equally bounces in and out of the story we see here in the first film.

For Meg, running the restaurant is an opportunity to recalibrate her plans. Christmas usually meant Paris with Uncle Dave and without that, she’s flailing a bit for her purpose. Running the restaurant, growing close to its manager, Joe (Keith Robinson), and navigating the challenges of mounting an event while things don’t go to plan help her figure things out, The same goes for Jennifer. Spending time at home, and immersing herself in her family and her happy memories, and sharing that with Simon and Eric, gives her a new perspective, too.

It’s a fun twist to do a pair of films this way, and to air them close enough together that the first is still fresh when you watch the second. Williams-Paisley and Williams executive produced both films, which were block shot together, alongside Neil Dodson, with David Wolf producing. Sean McNamara directed both films, which were both written by the teams of Erik Patterson & Jessica Scott and Claire Boyles & Zac Hug.